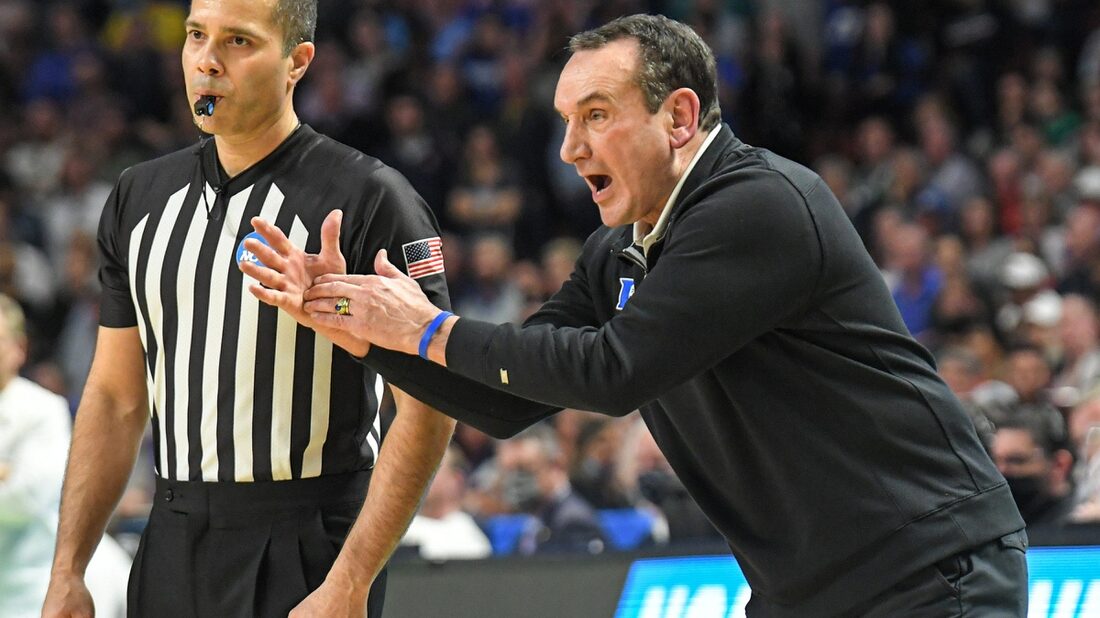 Every contest is potentially the final time Mike Krzyzewski coaches a basketball game.

The second-seeded Blue Devils will look to extend his career while third-seeded Texas Tech will seek to get Coach K started on his retirement when the teams meet in the West Regional semifinals on Thursday night in San Francisco.

Duke is a bit of a surprising underdog and has been backed by the third-highest handle among Sweet 16 teams with 78 percent at BetMGM. The Blue Devils (+1.5) have also been backed by 71 percent of the spread bets.

Texas Tech is a 1.0-point favorite at BetRivers and DraftKings and the action has been one-sided at both of those sportsbooks as well. The Red Raiders have been backed by just 37 percent of the bets and spread handle at BetRivers and 36 and 34 percent, respectively, at DraftKings as of Wednesday.

Krzyzewski, 75, is attempting to downplay the focus on himself, though he fully understands the situation. He is looking to go out in style with his sixth national championship and his first since 2015.

He is also two victories away from reaching his 13th Final Four.

“I’m not playing games,” Krzyzewski said. “But I’m proud of the fact that we’ve been there for four decades, that we’re at least knocking on the door. Five times the door let us completely in.

“I got guys who want to win, and our goal is to win the whole thing all the time, even if we’re young. So it says a lot for the caliber of player that I’ve coached. Like these guys, they’re good players, but they’re really good guys.”

First-year Texas Tech coach Mark Adams gets the opportunity to be the spoiler and become the answer to a trivia question: “Which coach beat Duke in Coach K’s final game?”

It’s an interesting situation for Adams, who has long admired Krzyzewski.

“He’s always been a mentor of mine, someone I looked up to,” Adams said. “Not only is he a great coach, but a great person. Just done so much for basketball and he’s built a program which we all admire and respect.”

The Red Raiders routed Montana State and rallied to beat Notre Dame to reach the Sweet 16 for the fifth time, three of them coming since 2018. In fact, Texas Tech is a stellar 11-3 over the past four NCAA Tournaments.

The Red Raiders displayed their resiliency against Notre Dame by closing the game with a 10-1 run over the final 1:56.

“We want to be the hardest playing team out there always,” Texas Tech guard Kevin McCullar said. “We’re glad to be still playing in the Sweet 16. I know at the beginning of the year no one even picked us or ranked us. We’re trying to prove people wrong and keep advancing as a family.”

McCullar and Bryson Williams each scored 14 against Notre Dame, while Kevin Obanor stood out with 15 points and 15 rebounds.

After allowing an average of 57.5 points in its two NCAA wins, Texas Tech will need another stellar showing against Duke, which defeated Cal State Fullerton and Michigan State to reach this stage.

Williams, who has 104 blocks on the season, is the first player in Duke history to have five rejections in back-to-back NCAA tourney games. He also had five against Cal State Fullerton.

The Blue Devils average 80.3 points per game on the season.