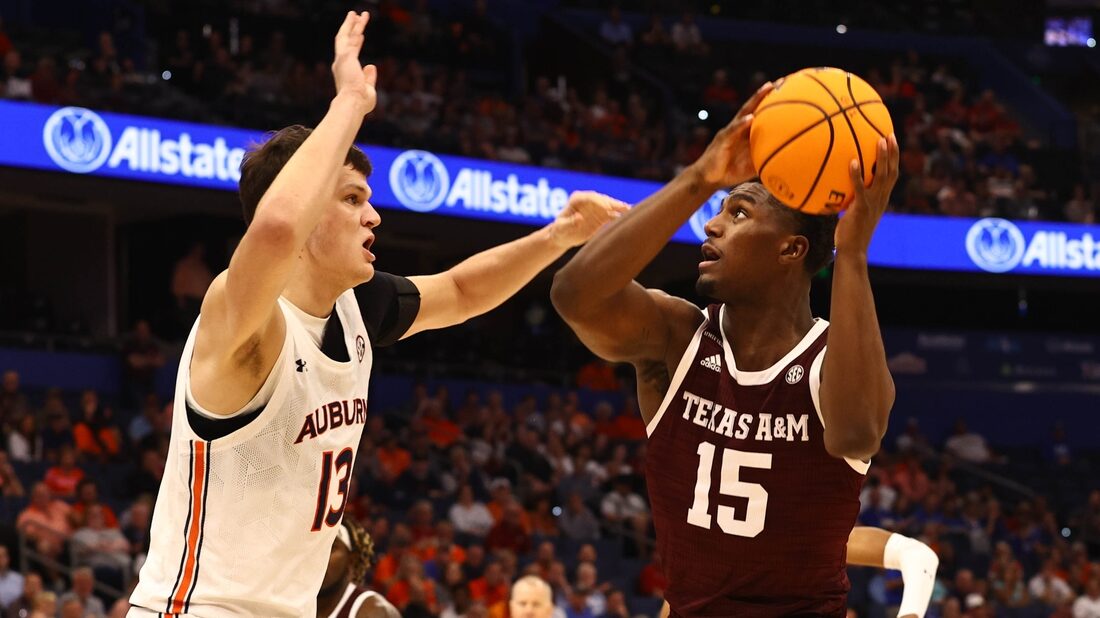 Tyrece Radford made a career-high five 3-pointers while recording 19 points and eight rebounds to help Texas A&M notch a 67-62 upset of #4 Auburn in the Southeastern Conference quarterfinals on Friday afternoon in Tampa.

Henry Coleman III added 16 points and 10 rebounds for the Aggies, who have won six straight games and seven of their past eight. Texas A&M also defeated a top-five team for the first time since a 71-69 win over fifth-ranked Texas on Jan. 30, 1982.

Auburn’s K.D. Johnson missed all 14 of his field-goal attempts while going scoreless. The Tigers made just 30.4 percent of their shots and were 9 of 36 from 3-point range.

Texas A&M connected on 43.9 percent of its shots, including 8 of 16 from 3-point range, while leading for nearly 39 minutes.

The Aggies lost 75-58 to Auburn on Feb. 12 for their eighth straight setback. Their hot stretch began after that game.

Auburn made a frantic dash from a 20-point deficit and Smith drained a 3-pointer to pull the Tigers within 62-58 with 36.9 seconds left. Jackson made four straight free throws over the next 4.9 seconds as A&M held on.

Texas A&M led 37-21 at halftime and continued to outplay Auburn over the first 10-plus minutes of the second half.

But Auburn suddenly awoke and went on a 13-3 burst to cut its deficit in half, with Zep Jasper’s putback pulling the Tigers within 56-46 with 6:10 left.

Green suddenly got hot and drilled three 3-pointers in 2 1/2 minutes to bring Auburn within 60-55 with 2:14 remaining.