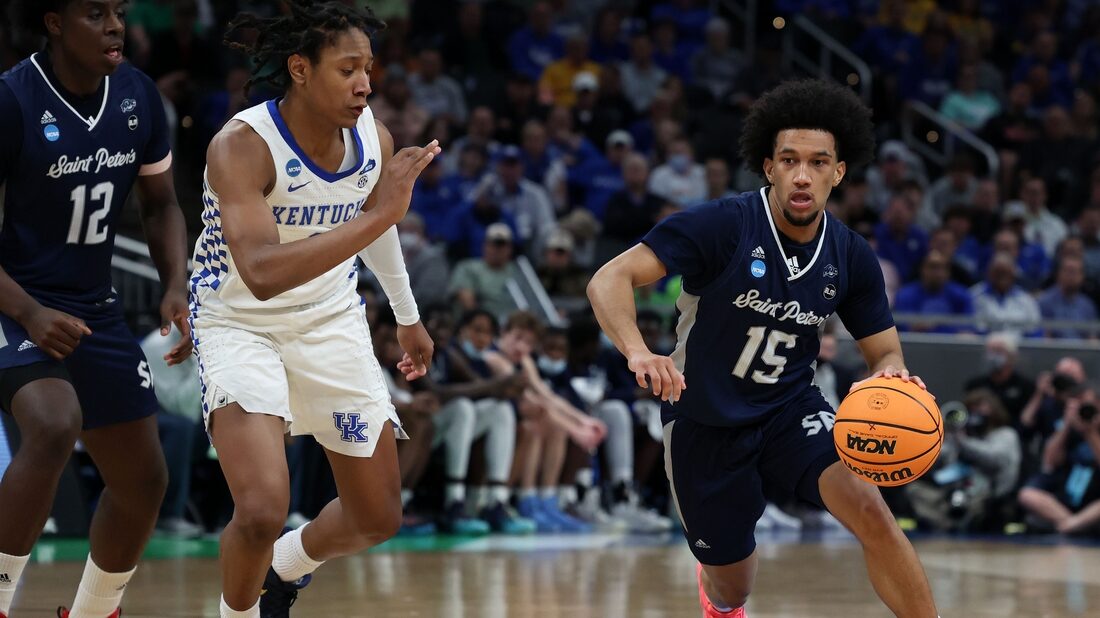 INDIANAPOLIS — Sleep is an April thing.

Or at least the view from coach Shaheen Holloway as Saint Peter’s crams for a second-round NCAA Tournament game as the encore to ousting East Region #2 seed Kentucky on Thursday night.

“I haven’t slept in nine days,” Holloway said Friday. “Obviously last week was our conference tournament, three straight games there plus the championship game and I got food poisoning on Monday so I was down for the count on three days. The team came down before me, I just got down here.”

By the time the Peacocks packed up and exited as victors on Thursday night, it was nearly Friday, but they caught most of #7 seed Murray State’s overtime win over San Francisco.

When Holloway was ready to put his head on the pillow, his cell phone had turned into a siren of congratulations from Jersey City, N.J., and beyond, virtual high fives for the program’s first NCAA Tournament win and well wishes for another.

The NCAA Tournament brings the complex conundrum of overnight preparation, spoils to the winner of first-round games. Whereas many power programs — like Kentucky — had assistants and video crews break down potential opponents in the region when the bracket was revealed, Saint Peter’s is not working with a coaching staff budget in the millions. Holloway isn’t working in a vacuum, but he’s wearing multiple hats to get players up to speed on the 31-2 Racers.

The same speed prep work is happening on the other side.

Kentucky’s John Calipari offered a warning label for Murray State with a self assessment that the Wildcats’ players were seemingly counting on their size and athleticism to overwhelm Saint Peter’s.

“I watched the tapes,” Calipari said of Saint Peter’s. “Let me tell you, I was worried going into the game. I wasn’t showing anybody. I was whistling and skipping and dancing and we can’t wait. But I’m like … Ooohh, they rebound. I mean, they rebounded with us. Now, Oscar (Tshiebwe) had his (16 rebounds) but they rebounded. Everybody else for them rebounded. Like they said, we are a good defensive team. Back-doored us to death and beat us on the bounce, and made threes coming off screens, and they played well. Shaheen has done a great job.”

Among Holloway’s worries about his sudden media — and social media — darlings is coming back to Gainbridge Fieldhouse with the personality of the team that felt overlooked by Kentucky.

“We got that Dr. Jekyll and Mr. Hyde team — we don’t know which team is gonna show up,” Holloway said. “Last night I told these guys, we’ve been here before. Let’s guard them, get a couple of stops and try to get a couple of easy baskets and once we changed our defense up it helped us out a lot. As far as the next round I’m working on Murray State right now. Very good team.”

As anxious as Matthew Lee and the Peacocks are to get back on the floor, the afterglow of Thursday’s win remains strong.

“We’ve seen a lot of pictures and videos of people back home celebrating. It’s honestly a surreal feeling knowing that they’re so proud of us,” said Lee, who put Kentucky away with game-ending free throws Thursday. “We’ve just got to keep on going.”