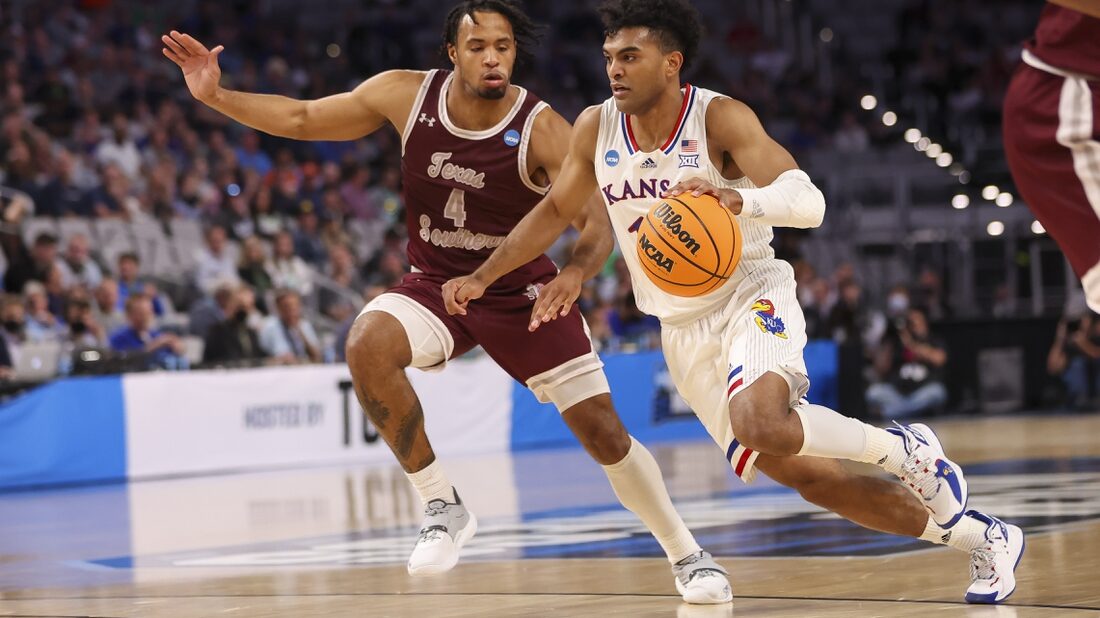 Ousted in the second round of the NCAA Tournament last season, top-seeded Kansas repelled multiple charges from Creighton on Saturday to reject any chances of a repeat disappointment.

“There was just those possessions that we knew we had to get, even late in the stretch, whether it was a rebound or executing a play, just to break away from getting in that range of them being close,” said the Jayhawks’ Ochai Agbaji, who Monday was named as one of four finalists for the Naismith Trophy.

Next up in Friday night’s Midwest regional semifinal in Chicago is a foe that knows something about nailbiters. Kansas (30-6) gets fourth-seeded Providence (27-5), which has won 16 games by single digits, including 11 by five or fewer points.

Kansas ultimately pulled away from ninth-seeded Creighton, 79-72, to reach the 32nd Sweet 16 in program history.

A transfer from Arizona State, Martin worked through knee soreness and inconsistency during the regular season before sparkling down the stretch. He scored 20 points against Creighton after a 15-point effort in the Jayhawks’ tournament-opening rout of Texas Southern, the first two times Martin led the team in scoring this season.

That distinction typically has been the domain of backcourt mate Agbaji, the Big 12 Player of the Year whose 19.3 points a game pace Kansas.

“Now for him to step up like this is huge,” Kansas’ Jalen Wilson said of Martin. “He makes our team go farther than what we could without him.”

Providence earned the program’s first trip to the Sweet Sixteen in 25 years by routing 12th-seeded Richmond 79-51 Saturday in Buffalo, N.Y.

Balance again boosted the Friars, who had five players in double-figure scoring. Noah Horchler notched a double-double of 16 points and 14 rebounds, while Al Durham followed with 13 points.

“That was as well as we’ve played all year, and we picked the right time to do it,” said Big East coach of the year Ed Cooley, in his 11th season at Providence. “I think we clicked at every level. I think we played with a sense of urgency and a sense of purpose.”

Cooley and Co. realize they’ll need to channel those skills and intangibles anew against Kansas, although a breakthrough in the first weekend of the NCAA Tournament instills the Friars with plenty of good vibes.

“I think it gives us a lot of confidence,” Cooley said. “Obviously, we’re going to play against a blue blood that had a really, really hard game (Saturday) against a Big East opponent, so I’m pretty sure that we’ll be well scouted as they will. It just tells you you’re building the program the right way. You are doing it with men of high integrity and great character, and it should be a great game.”

Kansas handled a Creighton team, after all, that thumped Providence 85-58 in the Big East tournament on March 11. Two weeks earlier, the Friars had drilled Creighton by 21 points (72-51).

Despite those inconsistencies and seemingly constant questioning about when its luck might run out, Providence has rallied behind an experienced core. Only one underclassman, sophomore Alyn Breed, is among Cooley’s usual nine-player rotation.

“We’re dangerous when we’re hitting from all cylinders inside and out,” the Friars’ A.J. Reeves said. “We have a lot of threats on this team both on the offensive end and on the defensive end, and when we play like this, I feel like we’re the best team in the country.”

Friday marks the first meeting between the Jayhawks and Friars.