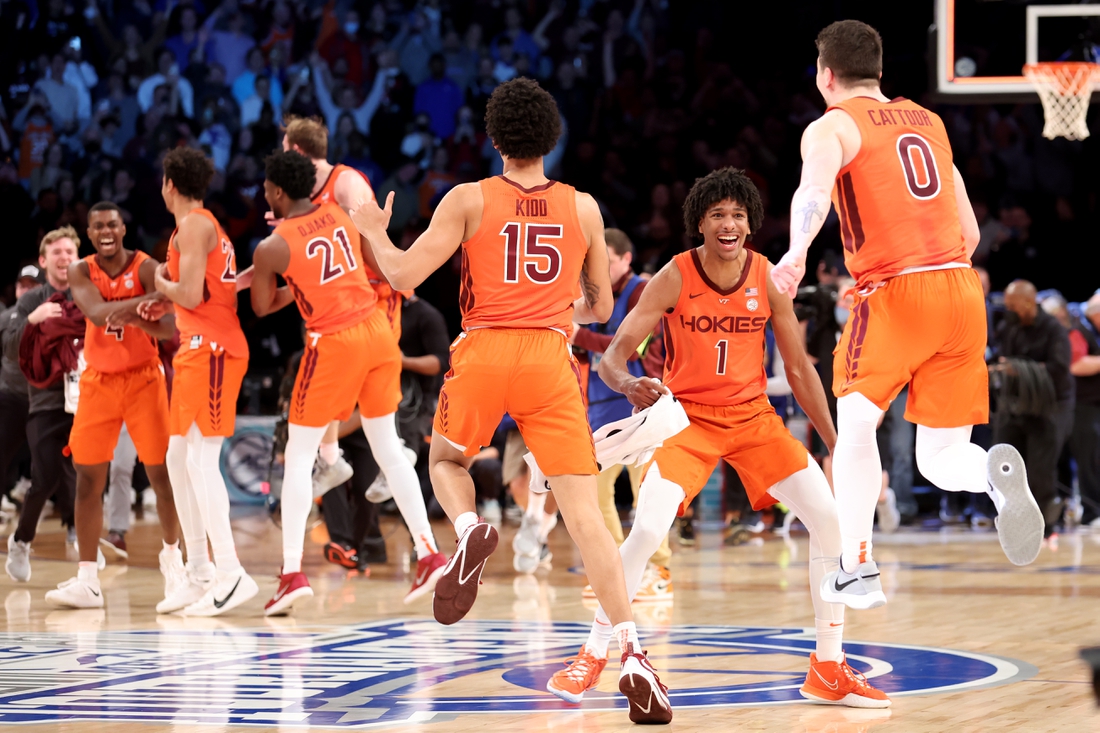 Hunter Cattoor scored a career high 31 points as he led Virginia Tech to perhaps its biggest win in program history, 82-67 over #7 Duke on Saturday night in the Atlantic Coast Conference tournament final in New York.

Keve Aluma added 19 points, 10 rebounds and seven assists as the seventh-seeded Hokies (23-12) captured their first ACC tournament title since joining the league in 2004-05 and earned an automatic berth into the NCAA Tournament.

Duke (28-6) got 20 points and five rebounds from Paolo Banchero. Wendell Moore Jr. added 11 points and six rebounds for the Blue Devils, who were beaten badly from the arc as they shot just 4 of 20 (20 percent) while Virginia Tech hit 10 of 22 (45.5 percent) from long distance.

Bennedict Mathurin scored 27 points and led the Wildcats back from a 12-point second-half deficit to win the Pac-12 championship game with a victory over the Bruins in Las Vegas.

Top-seeded Arizona (31-3) earned its first conference tournament title since 2018 and is in line to be a #1 seed in the NCAA Tournament for the first time since 2014.

Mathurin, the Pac-12 Player of the Year, scored 18 points in the second half and made 13 of 15 free-throw attempts. Four players scored in double figures for second-seeded UCLA (25-7), led by Jules Bernard with 19 points.

Kansas receives the conference’s automatic bid to the NCAA Tournament, though both teams are likely to be on one of the top three lines. Kansas is likely headed for another #1 seed.

Collin Gillespie scored 17 points, all in the second half, and drilled 3-pointers on back-to-back possessions late in the contest to help the Wildcats secure a hard-fought victory over the Bluejays in the Big East tournament title game in New York.

The second-seeded Wildcats (26-7) earned the conference’s automatic bid to the NCAA Tournament. Gillespie added seven rebounds and five assists, while Justin Moore scored 16 points for Villanova, which won the tournament for the fifth time in the last seven events.

Ryan Kalkbrenner posted 19 points with eight rebounds and three blocked shots and Alex O’Connell had 10 for #4 seed Creighton (22-11), which failed in its fourth Big East final in school history without a win. Freshman Arthur Kaluma had nine points and 12 rebounds.

Jaden Ivey scored 17 of his 22 points in the second half to pace the Boilermakers to a victory over the seventh-seeded Spartans in the semifinals of the Big Ten tournament at Indianapolis.

Kennedy Chandler scored 19 points, and the Volunteers withstood a late rally against the Wildcats to advance to the Southeastern Conference tournament title game in Tampa.

Tennessee (25-7), the #2 seed, will take on #8 Texas A&M in Sunday’s title game, the third time in the past four tournaments the Volunteers have reached the championship game. Tennessee, however, has not won the event since 1979.

Zakai Zeigler scored 11 points and Josiah-Jordan James added 10, but defense was the key to defeating Kentucky (26-7).

Stanley Umude scored 20 points and Au’Diese Toney 18 for fourth-seeded Arkansas (25-8), which lost for just the third time in the past 18 contests.

Kyler Edwards scored 20 points and tied his career high with eight assists as the short-handed Cougars rolled to a victory over the Green Wave in the first American Athletic Conference semifinal game in Fort Worth, Texas.

The Cougars (28-5), the AAC’s regular-season champion and the top seed in the tournament, will play Memphis in the final on Sunday. Houston earned a berth in the AAC tournament final for the fourth consecutive season.

Jordan Bohannon banked in a go-ahead 3-pointer with 1.1 seconds left and Keegan Murray scored a game-high 32 points as the Hawkeyes rallied to defeat the Hoosiers in a Big Ten tournament semifinal in Indianapolis.

Trailing by nine with 5:31 remaining, the Hawkeyes closed the game on a 22-10 run. Fifth-seeded Iowa (25-9) advanced to meet third-seeded Purdue, ranked ninth nationally, in the tournament championship game on Sunday afternoon.

Trayce Jackson-Davis notched a double-double of 31 points and 10 rebounds for the ninth-seeded Hoosiers. Xavier Johnson added 20 points and nine assists for Indiana (20-13), and Race Thompson had 11 points and seven rebounds.