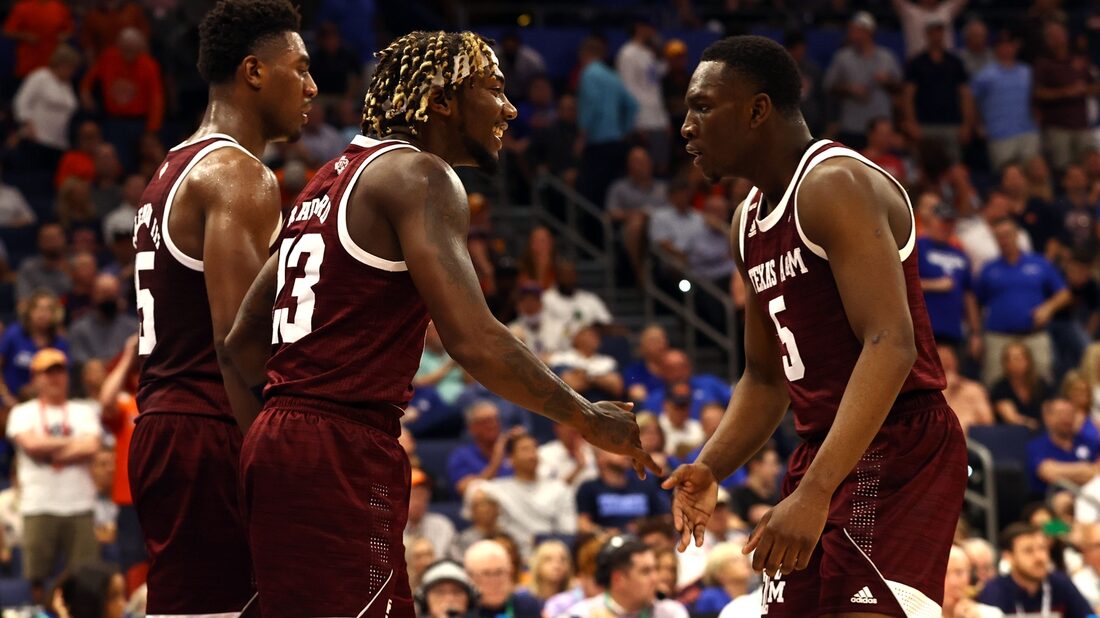 Tyrece Radford made a career-high five 3-pointers while recording 19 points and eight rebounds to help Texas A&M notch a 67-62 upset of #4 Auburn in the Southeastern Conference quarterfinals on Friday afternoon in Tampa.

Henry Coleman III added 16 points and 10 rebounds for the Aggies, who have won six straight games and seven of their past eight. Texas A&M also defeated a top-five team for the first time since a 71-69 win over fifth-ranked Texas on Jan. 30, 1982.

Azuolas Tubelis had 20 points and the Wildcats dominated the paint to beat the Buffaloes in the Pac-12 tournament semifinals in Las Vegas.

Tubelis, who was 9 of 14 from the field, enabled Arizona to outscore the fourth-seeded Buffaloes 30-14 in the paint after losing that battle 54-26 in a 79-63 loss at Colorado in late February. The Buffaloes (21-11) set a conference tourney record with 16 3-pointers on 32 attempts.

TyTy Washington scored 25 points, including two key 3-pointers late in the second half, and Oscar Tshiebwe notched 12 points and 14 rebounds to lift the Wildcats to a win against the Commodores in an SEC tournament quarterfinal game in Tampa.

The fifth-ranked Wildcats (26-6), seeded third in this tournament, advanced to face second-seeded Tennessee in a semifinal on Saturday afternoon.

Vanderbilt’s Jordan Wright led all scorers with 27 points on 10-for-12 shooting. Myles Stute (11 points) and Scotty Pippen Jr. (10) followed in double figures, but Pippen was frustrated from the floor, going 2 for 17.

Ochai Agbaji scored 22 points as the Jayhawks downed the Horned Frogs in the semifinals of the Big 12 tournament at Kansas City, Mo.

Top-seeded Kansas (27-6) will face 14th-ranked and third-seeded Texas Tech in the championship game. Mitch Lightfoot came off the Kansas bench to score a career-high 15 points on 6-for-8 shooting. Another sub, Remy Martin, added 10 points.

Propelled by the hot shooting of AJ Griffin and Paolo Banchero, the Blue Devils survived a determined challenge from the Hurricanes for a victory in an Atlantic Coast Conference tournament semifinal in New York.

Wendell Moore Jr. was clutch down the stretch, scoring eight of his 17 points in the final six minutes as top-seeded Duke (28-5) advanced to meet Virginia Tech.

Banchero made 8 of 10 shots in delivering 18 points, 11 rebounds and four assists, while his freshman classmate Griffin scored 21 points on 7-of-12 shooting and grabbed seven rebounds. Kameron McGusty had 24 points and seven rebounds to lead fourth-seeded Miami (23-10).

Jermaine Samuels had 21 points and 12 rebounds and Collin Gillespie recorded 10 assists as the Wildcats grinded their way to a victory over the Huskies in a semifinal of the Big East tournament in New York.

Brandon Slater added 15 points and put the Wildcats ahead to stay early in the second half with a 3-pointer. Second-seeded Villanova (25-7) will face fourth-seeded Creighton (22-10) in the championship game Saturday.

Jaden Ivey scored a game-high 17 points, including a game-clinching layup in the final minute, as the Boilermakers survived the Nittany Lions in the quarterfinals of the Big Ten tournament in Indianapolis.

Third-seeded Purdue (26-6), the only top four seed to survive a wild Friday, will take on seventh-seeded Michigan State in Saturday’s second semifinal.

Zach Edey had 15 points and Brandon Newman contributed 12 in a reserve role for the Boilermakers (14-17), who hit 50 percent from the field. Jalen Pickett scored 16 points and dished out six assists for the Nittany Lions (14-17), while John Harrar added 15 points and 12 rebounds.

Josiah-Jordan James scored 14 of his 16 points during an early second-half surge that carried the Volunteers past the Bulldogs in their Southeastern Conference tournament quarterfinal game in Tampa.

The second-seeded Volunteers (24-7) advance to a Saturday semifinal matchup against #5 Kentucky.

Zakai Zeigler and Kennedy Chandler, who twice left the game with a right ankle injury but returned, added 11 points each for Tennessee, which won for the 10th time in 11 games. Shakeel Moore scored 15 points to lead Mississippi State (18-15).

Alex O’Connell had 18 points and Arthur Kaluma scored 10 of his 17 points during a decisive first-half run for the Bluejays, who took control of the game late in the first half and went on to a convincing victory over the Friars in a Big East tournament semifinal in New York.

Ryan Kalkbrenner and Trey Alexander each added 15 points for the fourth-seeded Bluejays (22-10). Creighton will be seeking its first Big East tournament title. The Bluejays lost in the final in 2014, 2017 and last season.

Al Durham scored 21 points for top-seeded Providence (25-5), which was seeking its third tournament title. The Friars won this event in both 1994 and 2014.

Tyson Walker scored nine of his 11 points down the stretch to pace the Spartans to a victory over the Badgers in the quarterfinals of the Big Ten tournament at Indianapolis.

The Spartans (22-11), seeded seventh in the tourney, will face Purdue (26-6), ranked ninth in the country, in Saturday’s semifinals. Marcus Bingham Jr. had 19 points and 11 rebounds for Michigan State, which had split with Wisconsin during the regular season.

The Badgers (24-7) lost consecutive games for the first time this season. Brad Davison scored 23 points and Chucky Hepburn and Johnny Davis had 11 each for Wisconsin. Davis, the Badgers’ leading scorer and rebounder, was questionable after being injured on a flagrant foul against Nebraska. He made just 3 of 19 shots and missed all five of his 3-point attempts.

Jaime Jaquez Jr. scored 19 points to stay hot as he led the Bruins to a victory over the Trojans in a semifinal game of the Pac-12 tournament in Las Vegas.

Second-seeded UCLA (25-6) advanced to the conference title game for the first time since winning the tourney in 2014. The Bruins will meet second-ranked and top-seeded Arizona in the championship game Saturday night.

Boogie Ellis tried to take over for third-seeded USC (26-7), but his 27 points weren’t enough as the Trojans fell to their crosstown rival for the second time in a week and lost the rubber match of the season series.

Clarence Nadolny hit two free throws — his only two points of the game — with 53.9 seconds left as the Red Raiders edged the Sooners in the second semifinal of the Big 12 Championship.

The Red Raiders will face #6 Kansas in Saturday’s final. Texas Tech (25-8) was led by Kevin Obanor and Davion Warren with 11 points each.

Reserve Chris Lykes put together two strong scoring runs as the Razorbacks topped the Tigers in the Southeastern Conference quarterfinals in Tampa.

In beating the Tigers for the third time this season, Arkansas sprinted out on a 13-0 run to open the second half — part of a 19-0 stretch — and blow open the matchup against fifth-seeded LSU (22-11). Au’Diese Toney had 22 points and 10 rebounds for Arkansas. LSU’s Tari Eason scored 15 points.

Trayce Jackson-Davis made two free throws with 26.1 seconds remaining and the Hoosiers held on for a win over the Fighting Illini in the Big Ten tournament quarterfinals in Indianapolis.

Ninth-seeded Indiana (20-12) secured a win that likely will enable it to lock up an NCAA Tournament berth. The Hoosiers return to action on Saturday in a semifinal tilt versus fifth-seeded Iowa. Jackson-Davis led Indiana with 21 points and seven rebounds.

Fabian White Jr. scored 18 points and Jamal Shead added 15 points and seven assists as the Cougars rallied from a double-digit deficit and ran past the Bearcats in an American Athletic Conference tournament quarterfinal game at Fort Worth, Texas.

Houston (27-5), the regular season AAC champion and the top seed in the tournament, advances to play fifth-seeded Tulane in a semifinal on Saturday afternoon.

Trey Pulliam scored 11 points, Adam Seiko had 10, including four key free throws in the final seconds, and the Aztecs beat the Rams in the semifinals of the Mountain West Conference tournament in Las Vegas.

Third-seeded San Diego State (23-7) will face top-seeded Boise State (26-7) in the title game on Saturday night. The Broncos beat fourth-seeded Wyoming 68-61 in the other semifinal.

Keegan Murray scored 18 of his 26 points in the first half, and also set a team single-season scoring record, as the Hawkeyes overcame an early double-digit deficit to beat the Scarlet Knights in the quarterfinals of the Big Ten tournament in Indianapolis.

Tony Perkins and Jordan Bohannon, who topped the 2,000 career point mark, each scored 16 for Iowa (24-9). Iowa has won back-to-back Big Ten tournament games for the first time since 2006 — and 10 of its last 12 overall games this season.

Darius Maddox scored 20 points and the Hokies advanced to the Atlantic Coast Conference tournament championship game for the first time by defeating the Tar Heels in New York.

Keve Aluma added 18 points and Justyn Mutts had nine points for the Hokies. Seventh-seeded Virginia Tech (22-12) takes on #7 Duke in the Saturday final.

Armando Bacot paced third-seeded North Carolina (24-9) with 19 points on 9-for-10 shooting and 14 rebounds before fouling out.