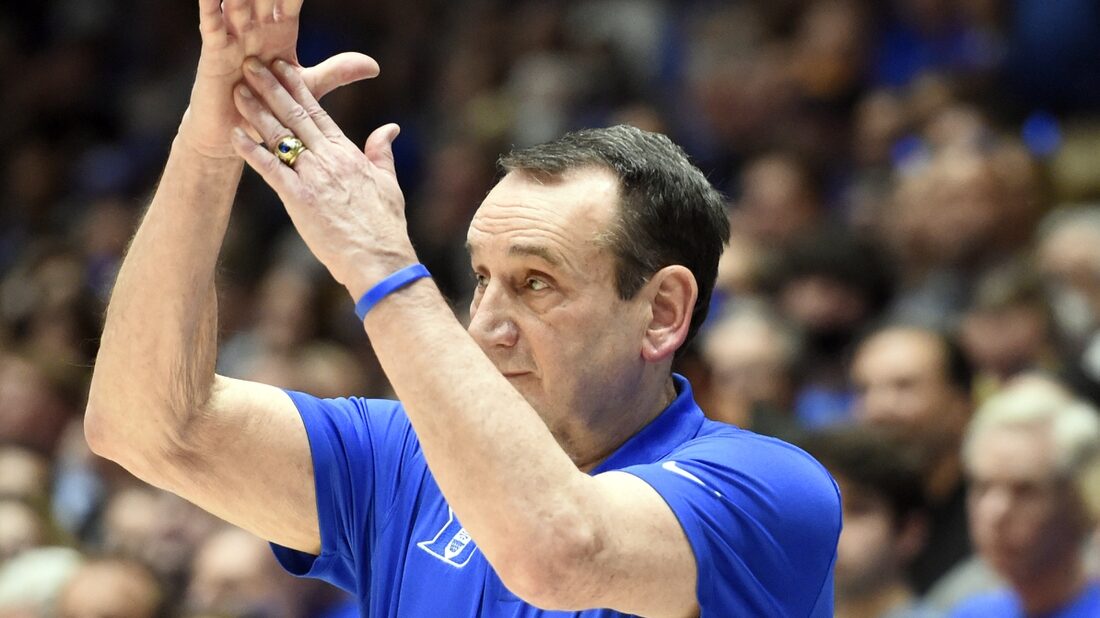 Four players reached the 20-point mark for visiting North Carolina in a stunning 94-81 victory against #4 Duke in the final home game for Hall of Fame coach Mike Krzyzewski on Saturday night in Durham, N.C.

It was one of the most-anticipated matchups in the storied rivalry with Krzyzewski’s 42-year run with Duke hitting a certain juncture. Instead, first-year coach Hubert Davis directed the Tar Heels to a victory against a ranked team for just the second time this season.

Armando Bacot racked up 23 points, Caleb Love ended up with 22 points with a late-game surge, R.J. Davis had 21 and Brady Manek posted 20 points for the Tar Heels (23-8, 15-5 Atlantic Coast Conference).

Paolo Banchero scored 23 points to lead Duke (26-5, 16-4), which had clinched the outright ACC regular-season championship earlier in the week. The Blue Devils had won their last three games on the road and looked poised to gain more momentum heading into the postseason.

Oumar Ballo came off the bench to score 16 points to lead a balanced effort as the Wildcats wrapped up a perfect season at home with a victory over the Golden Bears in Tucson, Ariz.

Bennedict Mathurin, Pelle Larsson and Justin Kier each scored 13 points. Kier, the team’s only senior, made his first start of the season for Arizona (28-3, 18-2 Pac-12), which finished 17-0 at McKale Center and solidified a potential #1 seed in the NCAA Tournament.

Cal (12-19, 5-15) got 16 points from Jordan Shepherd. Makale Foreman contributed 12 points and Lars Thiemann scored 11 as the Bears played without starting point guard Joel Brown because of a knee injury.

James Akinjo scored 20 points and had two critical baskets in the final four minutes as the Bears survived a torrid Cyclones comeback to post a home win at Waco, Texas.

The victory assured the Bears (26-5, 14-4 Big 12) a share of the conference title with Kansas, which defeated Texas in overtime earlier Saturday. Kendall Brown added 16 points and 10 rebounds for the Bears, with Adam Flagler tallying 13 and Jeremy Sochan hitting for 12 points. Baylor will play seventh-seeded Oklahoma in the Big 12 quarterfinals on Thursday.

Jabari Smith scored 21 points as the Tigers clinched the outright Southeastern Conference title with a win over the Gamecocks in Auburn, Ala.

Jermaine Couisnard scored a game-high 22 points for South Carolina (18-12, 9-9), which entered with five victories in its previous six games. The result allowed the Tigers to seal the #1 seed for next week’s SEC Tournament at Tampa.

David McCormack scored the last of his game-high 22 points by converting a dunk with 39 seconds left in overtime as the Jayhawks edged the Longhorns in Lawrence, Kan.

Playing their third game in five days, the Jayhawks (25-6, 14-4 Big 12) claimed at least a share of their 20th Big 12 championship in the 26-year history of the league while also obtaining an NCAA-record 63rd conference title overall.

Inside force Oscar Tshiebwe produced 27 points and 14 rebounds for his 25th double-double as the Wildcats closed their Southeastern Conference regular season with a victory over the Gators in Gainesville, Fla.

Tshiebwe made 11 of 16 field goals and went 5-for-5 at the stripe. He produced 11 straight points for his team early in the second half as he notched his 13th straight double-double. In sweeping the two-game season series, the Wildcats (25-6, 14-4 SEC) led by 12 at halftime as the Gators (19-12, 9-9) struggled to find their game, especially from long range.

Colin Castleton posted 23 points and 11 rebounds and Anthony Duruji added 10 points for the Gators. But the team shot 39.7 percent from the field and was just 3 of 23 from deep (13 percent).

Eric Hunter Jr. had 17 points as the Boilermakers held off a late charge to beat the Hoosiers in West Lafayette, Ind.

Indiana (18-12, 9-11) suffered another blow to its NCAA Tournament hopes in a must-win game. Indiana rallied from as many as nine points down in the second half, going on an 11-0 run to take a 51-48 lead on a driving layup by Rob Phinisee. Xavier Johnson led Indiana with 18 points and 12 assists.

Justin Moore scored 16 points, Jermaine Samuels added 15 and the Wildcats used an early 20-1 run to cruise past the host Bulldogs in Indianapolis.

Caleb Daniels and Collin Gillespie had 11 each for the Wildcats (23-7, 16-4 Big East), who already had clinched the #2 seed in the upcoming Big East conference tournament. Jordan Longino also scored 10 and reached double figures for the first time in his career.

The Cowboys don’t get to play in the postseason, but they finished their regular season with a highlight, knocking off the Red Raiders in Stillwater, Okla.

Oklahoma State (15-15, 8-10 Big 12), banned from postseason play due to NCAA sanctions, ended their season with a 13-2 run against visiting Texas Tech, which heads into the Big 12 tournament this week in Kansas City, Mo.

Texas Tech (23-8, 12-6) held a 10-point lead (49-39) with 9:36 remaining, but managed only two points the rest of the game as Oklahoma State forced six turnovers down the stretch. The game-winning shot came when Bryce Thompson knocked down his only 3-pointer of the game to give the Cowboys the 52-51 lead with 19 seconds remaining.

Kennedy Chandler made a career-best five 3-pointers and scored 15 points to help the Volunteers notch a wire-to-wire victory over the Razorbacks in Southeastern Conference play at Knoxville, Tenn.

Santiago Vescovi also scored 15 points and Zakai Zeigler had 13 points with six assists for the Volunteers (23-7, 14-4 SEC). Josiah-Jordan James had 12 points and three steals for Tennessee, which finished the regular season 16-0 at home.

Arkansas (24-7, 13-5) recovered from a 24-point deficit and had a chance to tie the score but JD Notae’s contested 3-point attempt was off the mark with nine seconds left. Notae had 20 points and three steals for Arkansas, which had a five-game winning streak halted while losing for just the second time in 16 games.

Jaime Jaquez Jr. scored 27 points and the host Bruins converted 15 turnovers into 21 points to score their first win over the rival Trojans since February 2019.

UCLA (23-6, 15-5 Pac-12) came into Saturday’s matchup having lost each of its previous five matchups with the Trojans since Mick Cronin became the head coach in the 2019-20 campaign, including on buzzer-beaters in the last two regular-season finales.

Adama Sanogo got off to a torrid start and finished with 26 points and 11 rebounds to lead the Huskies past the visiting Blue Demons in Storrs, Conn.

Sanogo finished 10-for-16 from the floor for UConn while Tyrese Martin also notched a double-double, with 19 points and a game-high 16 rebounds.

Tevin Brown scored 23 points to help the Racers post a victory over the Eagles in the Ohio Valley Conference tournament title game in Evansville, Ind.

The win earned the Racers the league’s automatic berth to the NCAA Tournament.

Justice Hill had 21 points for the Racers (30-2), who won their national-best 20th straight game. Murray State is the first team to land a spot in this season’s 68-team NCAA field. Johni Broome scored a career-best 32 points and collected eight rebounds for Morehead State (23-11).

Darius Days scored 24 points with seven rebounds as the Tigers posted an overtime win over the Crimson Tide in Baton Rouge, La., in the regular-season finale for both teams.