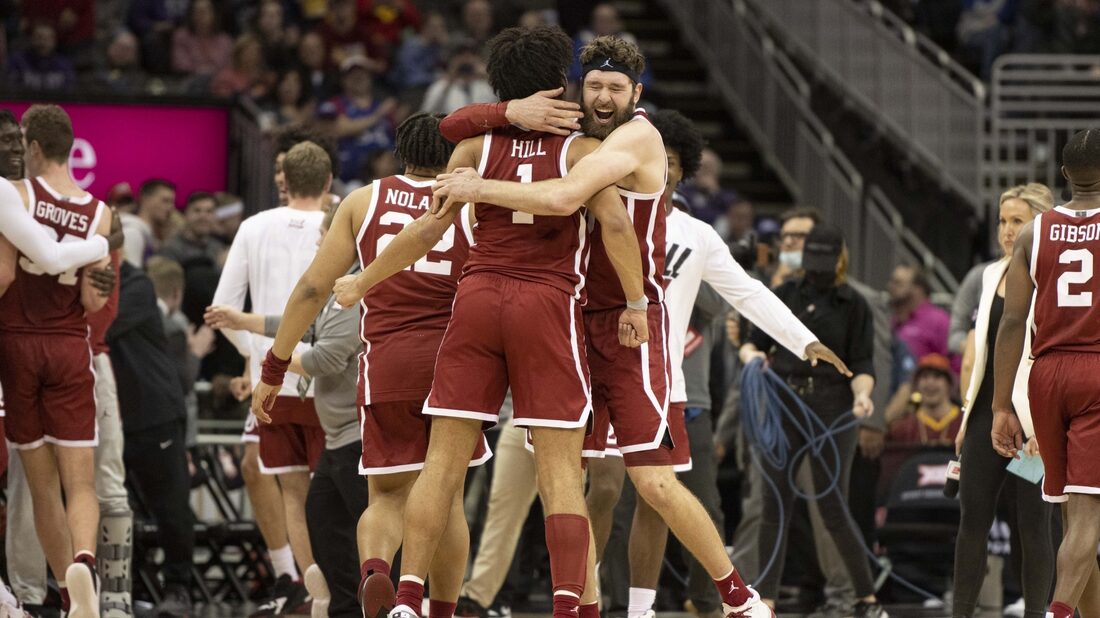 Jacob Groves scored a season-high 15 points as Oklahoma knocked off #3 Baylor 72-67 in the quarterfinals of the Big 12 tournament on Thursday in Kansas City, Mo.

The Sooners bolstered their NCAA Tournament case with their fourth consecutive win, while the Bears’ five-game winning streak was snapped. Oklahoma, the tournament’s seventh seed, will take on third-seeded and 14th-ranked Texas Tech on Friday.

Umoja Gibson added 14 points and Marvin Johnson had 12 for Oklahoma (18-14), which won its fourth game in a row.

Christian Koloko recorded 24 points and nine rebounds to help the Wildcats hold off the Cardinal in the Pac-12 quarterfinals at Las Vegas.

Spencer Jones scored a career-best 28 points and collected eight rebounds for ninth-seeded Stanford (16-16), which lost for the eighth time in its last 10 games. Harrison Ingram added 16 points for the Cardinal, who put up a fight in a game that featured 22 lead changes.

Ochai Agbaji received his Big 12 Player of the Year trophy before tipoff and then scored 18 points as the Jayhawks trampled the Mountaineers in the quarterfinals of the conference tournament at Kansas City, Mo.

Agbaji, who led Big 12 scorers with a 19.8-point average, went 7-for-15. Christian Braun recorded his second straight double-double with 11 points and 14 rebounds as Kansas dominated the glass, 48-27. Malik Curry led the Mountaineers with 19 points.

Wendell Moore Jr. scored 26 points and the Blue Devils scored the final 10 points to overcome the short-handed Orange for a victory in the quarterfinals of the Atlantic Coast Conference tournament in New York.

Mark Williams added 15 points and 16 rebounds, Trevor Keels had 14 points, and Paolo Banchero had 10 points and 10 rebounds for the top-seeded Blue Devils (27-5). Duke held the Orange without a point for the last 3:32.

Ninth-seeded Syracuse (16-17) was without All-ACC guard Buddy Boeheim, suspended one game for throwing a punch Wednesday against Florida State. Jimmy Boeheim poured in a season-high 28 points.

Brandon Slater made two free throws with 2.8 seconds left to complete the Wildcats’ comeback for a victory over the Red Storm in the quarterfinals of the Big East tournament at New York.

Caleb Daniels led second-seeded Villanova (24-7) with 19 points, Justin Moore added 15 and Collin Gillespie had 14. The Wildcats will face third-seeded and 20th-ranked UConn in the semifinals on Friday.

Al Durham hit a 3-pointer with 39 seconds left to put the Friars ahead to stay as they held off the Bulldogs’ upset bid in a Big East tournament quarterfinal in New York.

Nate Watson scored 26 points and Jared Bynum added 16 for the top-seeded Friars (25-4), who rallied from a 59-56 deficit in the final 1:20. Providence beat Butler three times this season.

Jaime Jaquez Jr. scored 23 points and Jules Bernard added 19 as the Bruins beat the Cougars in the Pac-12 tournament quarterfinals in Las Vegas.

The second-seeded Bruins (24-6) move on to Friday night’s semifinals, where they will take on third-seeded and 21st-ranked Southern California.

Jaquez made 9 of 15 shots and added 11 rebounds for his fifth double-double of the season. Andrej Jakimovski had 15 points and Roberts added 14 for Washington State.

Terrence Shannon scored a game-high 15 points to lead four Red Raiders in double figures during a victory over the Cyclones in the Big 12 tournament quarterfinals at Kansas City, Mo.

Third-seeded Texas Tech (24-8) also got 11 points from Kevin McCullar and 10 points each from Kevin Obanor and Adonis Arms.

Iowa State (20-12) was led by Tyrese Hunter’s nine points. The Cyclones shot 31.3 from the field for the game.

Isaiah Whaley put up 10 points, seven rebounds — including six on the offensive glass — and four blocked shots for the third-seeded Huskies (23-8). UConn’s defense clamped down on the Pirates, who posted a season low in points for the second straight night.

Boogie Ellis scored 17 points and the Trojans tied the school record for victories by holding on for a victory over the Huskies in the Pac-12 quarterfinals at Las Vegas.

Isaiah Mobley contributed nine points, nine rebounds and six assists for third-seeded USC (26-6). The Trojans matched the 2016-17 team that went 26-10 for most wins.

Terrell Brown Jr. scored 21 of his 23 points in the first half for sixth-seeded Washington (17-15). Emmitt Matthews Jr. added 12 points and Jamal Bey had 10.

Damion Baugh scored 17 points and Francisco Farabello canned a pair of clutch free throws with 15.3 seconds left as the Horned Frogs rallied to stun the Longhorns in a Big 12 tournament quarterfinal in Kansas City, Mo.

A huge second half sent the Horned Frogs (20-11) into Friday’s semifinals. It’s just the second-ever appearance for TCU in the Big 12 semis.

Chandler Jacobs sank a layup with 1.8 seconds remaining to give the Rams a victory over the Aggies in the Mountain West quarterfinals at Las Vegas.

Isaiah Stevens had 14 points, seven rebounds and five assists for second-seeded Colorado State (25-4), his best pass being when he fed Jacobs for the winning points. The Rams’ semifinal opponent will be third-seeded San Diego State (22-7), which beat sixth-seeded Fresno State 53-46 later Thursday.

Keegan Murray scored 26 points to lead five players in double figures as the Hawkeyes shattered three Big Ten tournament single-game records in a rout of the Wildcats in Indianapolis.

The result sends the fifth-seeded Hawkeyes (23-9) into Friday’s quarterfinals against fourth-seeded Rutgers. The Wildcats finished their season at 15-16 after being blitzed by a team that has won nine of its past 11 games.

Jordan Bohannon added 17 for Iowa, which became the first team to break 100 points in a Big Ten tourney game. The Hawkeyes also set a single-game record of 19 3-pointers and made a single-game best 43 field goals. Ryan Young scored 14 points for Northwestern (15-16).

Brady Manek outscored the entire Cavaliers team in the first half (19-13) on the way to 21 points as the Tar Heels rolled to an easy victory in the ACC tournament quarterfinals in New York.

Jaylen Gardner scored 17 points to pace Virginia (19-13). After appearing in seven consecutive NCAA Tournaments and winning the 2019 edition, it’s likely Virginia will miss out on this year’s event.