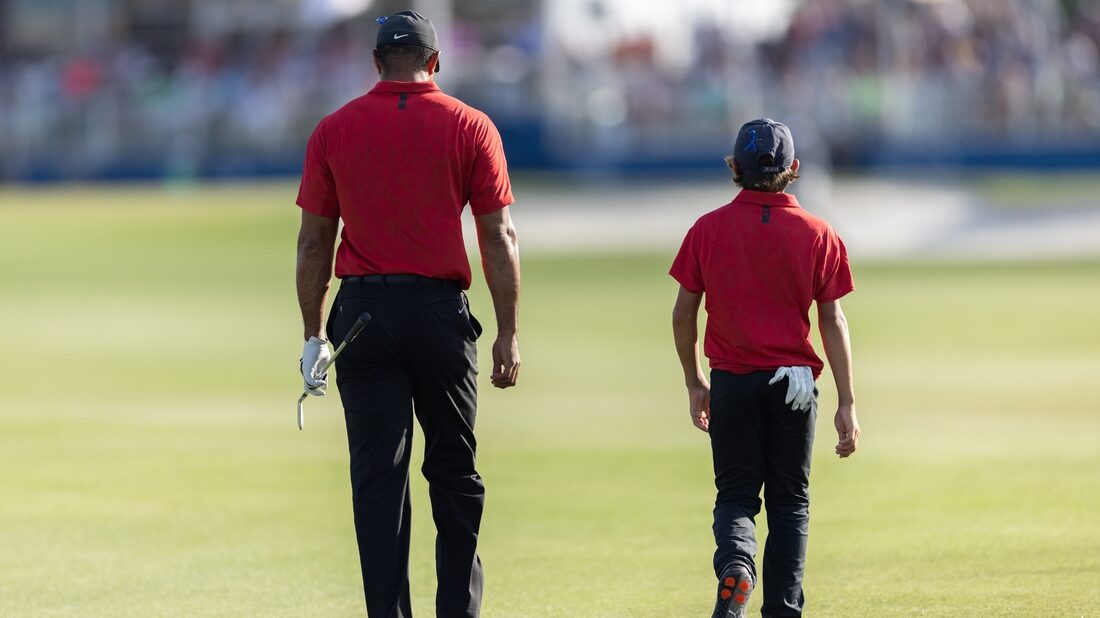 Riding the emotional and poignant comments of his daughter, Sam, 15-time major champion Tiger Woods was inducted into the World Golf Hall of Fame on Wednesday night at PGA Tour headquarters in Ponte Vedra Beach, Fla.

Sam Woods, 14, saying she inducted her father “into the Dad Hall of Fame a long time ago,” proudly presented Tiger Woods into this Hall of Fame. She referenced Tiger’s car crash last year in her closing comments.

“We didn’t know if you’d come home with two legs or not,” she said. “This is why you deserve this, because you’re a fighter. You’ve defied the odds every time, being the first Black and Asian golfer to win a major, being able to win your fifth Masters after multiple back surgeries, and being able to walk just a few months after your crash.”

Tiger Woods subsequently said, “I just lost a bet to (Steve) Stricker that I wouldn’t cry. …

“All the inductees, all the people who — all the past Hall of Famers who are here, players, the World Golf Hall of Fame committee, thank you for inducting me and passing me in here. Jay (Monahan, PGA Tour commissioner), thank you for moving the age down from 50 to 45.”

Woods began his narrative at 6 years old, a time he says he “was getting hooked to the game of golf” with his father, Earl, who died in 2006. From there he told the story of a young Tiger Woods learning, playing — and becoming one of the best golfers to ever play the game.

“So without the sacrifices of Mom who took me to all those junior golf tournaments, and Dad, who’s not here, but who instilled in me this work ethic to fight for what I believe in, chase after my dreams, nothing’s ever going to be given to you, everything’s going to be earned,” Tiger Woods said. “If you don’t go out there and put in the work, you don’t go out and put in the effort, one, you’re not going to get the results, but two, and more importantly, you don’t deserve it. You need to earn it.”

Woods has not committed to playing in 2022 as he continues to recover from the car accident. His only 2021 tournament came in December at the 36-hole PNC Championship with his son, Charlie.

But Wednesday night was a stroll down memory lane, with his children and his mother, Tida, looking on.

“I know that golf is an individual sport,” Woods said. “We do things on our own a lot for hours on end, but in my case, I didn’t get here alone. I had unbelievable parents, mentors, friends, who allowed me and supported me in the toughest times, the darkest of times, and celebrated the highest of times.

In this article:pga, tiger woods