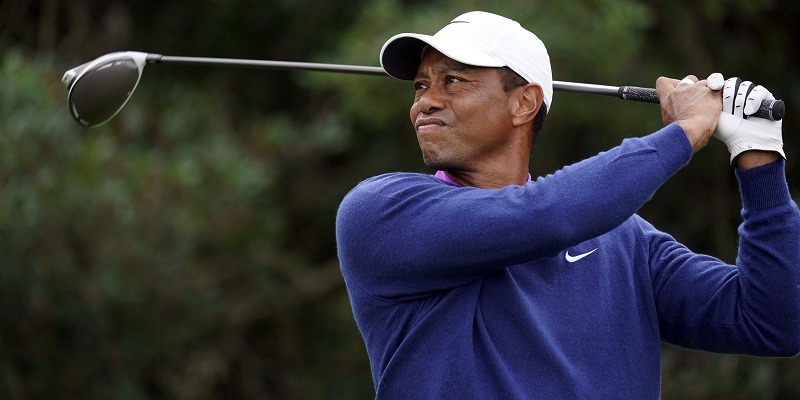 Tiger Woods continues fighting to return to the game of golf while recognizing reality is a steep climb.

Woods was visibly shaken and emotional retracing the winding road in his return to the public eye Tuesday at the Hero World Challenge in the Bahamas.

“This year has been a year I’d like to turn the page on,” said Woods, who turns 46 in 30 days. “It’s been full of some tough memories and tough times. But it would be nice to turn the page.”

Reflective Tiger taking one step at a time

Woods said amputation “was on the table” during the three-week hospital recovery in California.

“I’m lucky to be alive and also have a limb,” Woods said.

His leg was “shattered” by all reasonable definitions. Medically speaking, he suffered “comminuted open fractures” to the upper and lower portions of his tibia and fibula in his right leg, as well as damage to the ankle bones. He remains in a walking boot.

Behind the microphone for the first time since the life-altering car accident in February, Woods flashed his vintage competitive nature blended with the realities he faced, past and present, from the immobilization required in his ongoing recovery from a leg injury.

“The challenge of it is, I enjoy the challenge of getting in there and trying to push it to the next level. I enjoy that part of it,” Woods said. “Maybe one day it’ll be good enough where I can get out here and compete against the best players in the world.”

Woods’ trophy case includes 82 career wins and 15 major championships. But the reality of his situation was abundantly clear Tuesday. Woods is back in healing mode after his 11th surgery, and countless unknowns are in his path this time around.

“My back hurts and my leg hurts,” he said.

Milestones have been cleared, he said, but Woods said he has many more “tough times” ahead but is counting his blessings in the small steps and incremental victories during his rehab.

“Just getting outside — feeling the sun,” Woods said.

Being “tournament ready” is a long shot now but there is hope for the future, Woods said, but he plans to ramp up for a few tournaments at some point in the future.

Comebacks and past experience with finding patience are part of Woods’ living legacy. Woods had 10 surgeries — five knee operations and five more on his back — before his February accident left him facing a mountainous hurdle to get back to the game of golf.

“This one has been much more difficult,” Woods said. “The knee stuff, on my left knee, those operations. That’s one level. The back, that’s another level. With this right leg, it’s hard to explain how difficult it has been. Just to be immobile for three months. Just lay there. I was just looking forward to getting outside. That was a goal of mine. Especially for a person who has lived his entire life outside, that was the goal.

“I finally got to that point when I transitioned from wheelchair to crutches to now nothing.”

Woods said there were “some really tough times and pain got great,” but his medical team, friends and family helped him get through it. At present, he comes to grips each day with where he is physically and noted his advanced age is a new variable that wasn’t as problematic in recovering from spinal fusion surgery and knee operations.

“I’m on the better side of it. But I’ve still got a long way to go,” Woods said.

Practicing regularly is not an option for Woods now or going forward, Woods said. No specific target tournament is on his mind, or at least he wasn’t sharing such intel, but the thought of playing at St. Andrews next July brought a trademark ear-to-ear smile.

One step at a time is the focus.

“I’ve got to get there first,” Woods said.

He said he can play a full golf hole now, but not from his typical long tee markers.

“As far as playing at the Tour level, I don’t know that that’s going to happen. I play a round here and there. A little hit and giggle. I can do something like that. The USGA suggests playing forward. I really like that idea now,” Woods said with a chuckle.

He said he’s still getting used to hitting the ball short but is pleased to be able to participate at any level.

“Whether or not I’ll be out here at any level and when,” Woods said, he doesn’t know.

Most of golf’s greats have been able to step away on their own terms. Woods said being able to return from physical reconstructions to get the last major in the 2019 Masters, plus two additional wins, has him at peace with whatever is around the turn.

“I won’t have the opportunity to practice given the condition of my leg, and the buildup,” Woods said. “I’m at peace with that. … I don’t foresee this leg being what it used to be. Hence I’ll never have the back what it was. Clock’s ticking. I’m not getting any younger. All of that combined means a full schedule, a full practice schedule and the recovery that it would take to do that — no, I don’t have any desire to do that.

“To ramp up for a few events a year, as I alluded to yesterday, like Mr. (Ben) Hogan did. He did a pretty good job of it. And there’s no reason why I can’t do that and feel ready. I may not be tournament sharp in the sense that I haven’t played tournaments. But if you practice correctly and do it correctly, that I’ve come off surgeries before. I’ve come off long layoffs before and I’ve won or I’ve come close to winning before. I know the recipe for it. I’ve just got to get to a point where I feel comfortable enough that I can do that again.”

Woods is not competing in the Hero World Challenge but is on the scene in the Bahamas as the event host.

“I’ve hosted this event, unfortunately not as a player,” Woods said. “It’ll be fun watching these guys play. I’ve missed being away from the game for pretty much a year. … There’s only so much you can do on text. To be able to catch up with the guys this week, that will be fun. I haven’t seen the majority of them since February. Some have come over to the house, most of them have texted me over that time. It’ll be fun to catch up.”

The sixth Hero World Challenge, which follows a unique format, kicks off this week after a year off in 2020 due to the pandemic. The TGR Foundation celebrated its 25th year of pushing STEM programs and educational opportunities for underserved students.