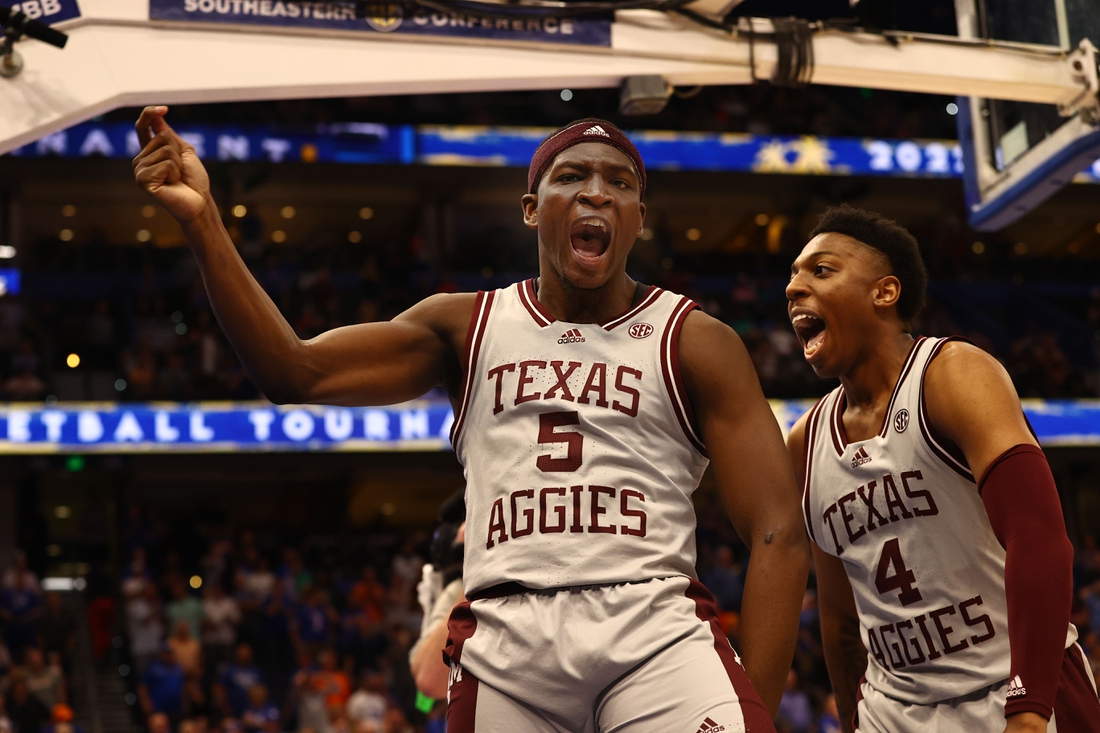 Texas A&M entered the Southeastern Conference tournament on the bubble for an NCAA Tournament bid, knowing it would take a strong showing to have a shot to continue its season.

After one overtime win and two wins against Top 25 teams, the Aggies can remove all questions and earn an outright tournament berth with a win Sunday over #9 Tennessee in the SEC title game in Tampa.

Texas A&M (23-11), the eighth seed, hasn’t won the conference tournament since joining the SEC in 2012. Second-seeded Tennessee (25-7) has lost in the championship game four times since last winning it in 1979.

Texas A&M will play its fourth game in four days after it started its tournament excursion Thursday with a dramatic 83-80 overtime win over Florida, thanks to a Hassan Diarra buzzer-beater.

Next, the Aggies took out the tournament’s top seed, #4-ranked Auburn. It was the first time since 1982 the Aggies had defeated a team ranked in the top five in the country, and they led by as many as 20 points before holding on to win 67-62.

And then in the semifinals, Texas A&M made short work of Arkansas. The Aggies had four players score in double figures in an 82-64 win that was never in doubt. Quenton Jackson led the way with 20 points, and Diarra came up with a dozen points off the bench in 18 minutes.

Tyrece Radford and Henry Coleman III scored 11 and 10 points, respectively, and the defense forced Arkansas into 15 turnovers as Texas A&M cruised into the title game for the first time since 2016.

“The NCAA says you have to take one day off per week, and we’ve already taken our one day off,” Texas A&M coach Buzz Williams said about his team’s energy. “I don’t mean that arrogant whatsoever. Twitter may say we should be tired, the opinion of others may say we should be tired. But prior to the season, prior to conference play, prior to the conference tournament, we work six days a week. So that’s what we’re doing this week; that’s it.”

The final day of that grind for Texas A&M will be a matchup against a more rested Tennessee squad. The Volunteers had a double-bye to the quarterfinals, starting their weekend with a comfortable 72-59 win over Mississippi State on Friday.

That set up a semifinal showdown against rival Kentucky, and the Volunteers used a huge defensive performance to prevail. Tennessee won 69-62, limiting the Wildcats to 2-of-20 shooting from 3-point range and 18 points below their season average in points per game. Kennedy Chandler led the Volunteers with 19 points on 8-of-16 shooting.

“I thought it was a major learning game for Kennedy Chandler,” Tennessee coach Rick Barnes said. “He learned when you play against quality opponents, you’ve got to be solid throughout possessions.”

And the Volunteers will need quality possessions again on Sunday against the Aggies, who have silenced the doubters this week.

“It’s a really terrific story for college basketball right now and why conference tournaments mean something for those teams that maybe didn’t have the regular season they wanted, and that’s what makes this time of year a special year,” Barnes said. “As we know, they play hard, aggressive, and they’re going to do it again (Sunday). No doubt about it.”

The two teams met once this season, a 90-80 win for the Volunteers in Knoxville on Feb. 1. Tennessee is on a season-high six-game winning streak after its semifinal victory.