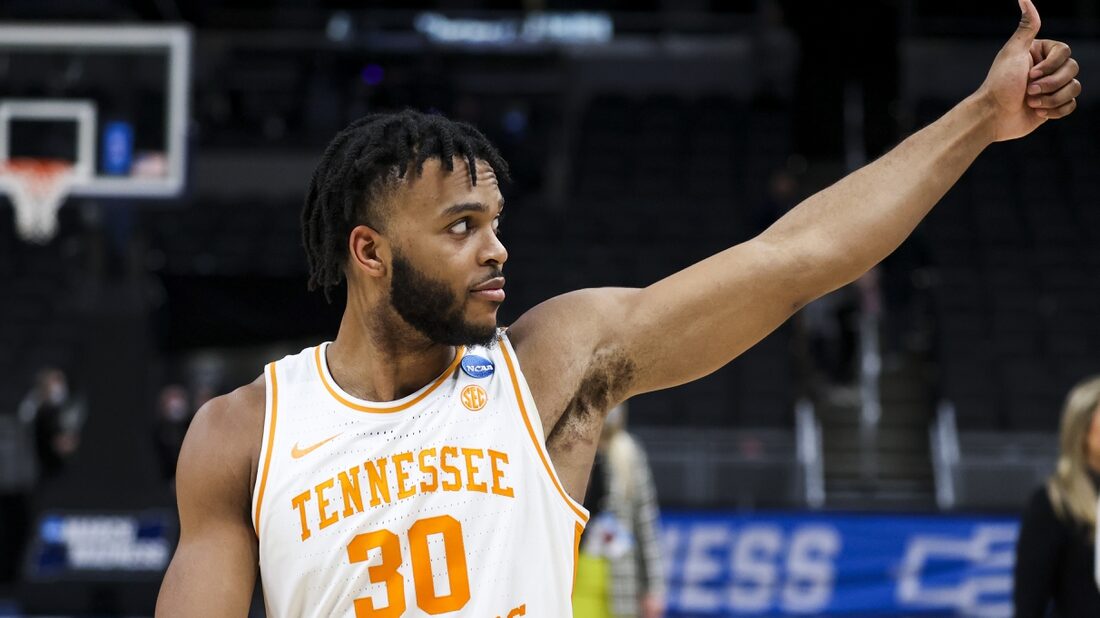 Tennessee and Michigan know all about NCAA Tournament games in Indianapolis.

They meet in a second-round matchup Saturday with the winner advancing to the Sweet 16.

The Volunteers are a 6.0-point favorite at PointsBet, where they have been backed by 73 percent of the spread bets and 74 percent of the handle. Their -240 moneyline has also seen lopsided action with 84 and 93 percent, respectively.

It was the Sweet 16 at Lucas Oil Stadium in 2014 where the Wolverines and Volunteers collided last, the second of two NCAA Tournament victories Michigan owns over the South Region #3 seed. The Wolverines also won in the 2011 tournament.

Tennessee (27-7) blitzed 14th-seeded Longwood on Thursday afternoon, 88-56, but began pre-planning for potential opponents on Monday. #11 seed Michigan (18-14) rallied from a lackluster first half, trailed by 15, but found its rhythm to separate from #6 Colorado State.

“It’s very different, no doubt it’s a different game,” Tennessee coach Rick Barnes said of the turnaround to face Michigan. “To be quite honest with you, I won’t allow myself to even think who we are going to play next, I just won’t. Because now I have — we put a lot of thought into Longwood because we respected them that much and what they did.”

One difference the Volunteers are certain to note is the presence of 7-foot-1 center Hunter Dickinson. He changed shots and owned the paint against Colorado State, while never forcing shots or demanding the ball despite a decided height and length edge. He reached 20 points (21) for the 19th time in his career and brings the experience of playing in the Sweet 16 with the Wolverines last March.

“Obviously our coaches have been working on it, and we know that they are big, and there’s no doubt they are going to pound it in there,” Barnes said. “It’s going to take a great team effort. Not only from our post players doing their work early and doing their job, but the guards helping, because we have always believed that post defense starts on the perimeter. We’ll have to have a great team effort.”

Dickinson needs to be a pillar in a starting lineup that includes three freshman starters. Point guard Frankie Collins had his best offensive game of the season on Thursday, posting a season-best 14 points and sparking a run in the second half with his active hands.

“Right now just confidence and stepping up and shooting it. If teams are going to play — I’m not going to let a team dictate how I play,” Collins said. “If they back off, I feel like I can get by you and still make something happen.”

Finding creases and sharing the ball is Tennessee’s forte. The Volunteers assisted on 29 of 33 field goals Thursday.

Barnes’ weapons are plentiful. The Vols put five in double figures in their tournament opener, and not by accident.

“It’s really fun to play this way where you know everybody on the team is just focused in on winning,” said Santiago Vescovi, who made six 3-pointers against the Lancers.

“I think it’s really fun whenever we start moving and everybody starts moving off the ball and on offense, too. That’s what we are playing our best basketball.”

The point guard matchup between SEC tournament MVP Kennedy Chandler, also a freshman, and Collins could be a marquee pairing for those not intrigued by dueling 7-footers. Tennessee starts junior Uros Plavsic, who is a bit heavy footed compared to Dickinson. Barnes can also turn to 6-11 freshman Jonas Aidoo.

Tennessee holds the edge in momentum as conference tournament champion and has won eight straight and 13 of its last 14. The Volunteers’ title odds at BetMGM are at +1600 after opening the season at +4000, with Tennessee being backed by 5.8 percent of the bets and 5.5 percent of the national champion money.

Further, experience is not on Michigan’s side.

But youth isn’t always a negative, as Michigan coach Juwan Howard knows all too well. A starter for the Wolverines alongside Chris Webber, Jalen Rose, Ray Jackson and Jimmy King — all freshmen known as the Fab Five — Howard played in the 1992 national championship game against Duke in his first season of college basketball.

“If I remember, Coach (Steve) Fisher started five freshmen,” Howard said with a smirk. “Going through starting lineup, and each player name was called … I’m like, whoa. We had three freshmen starting. Some people will say it’s a very young team. True, it is.

“But did they grow up today? Yes.”