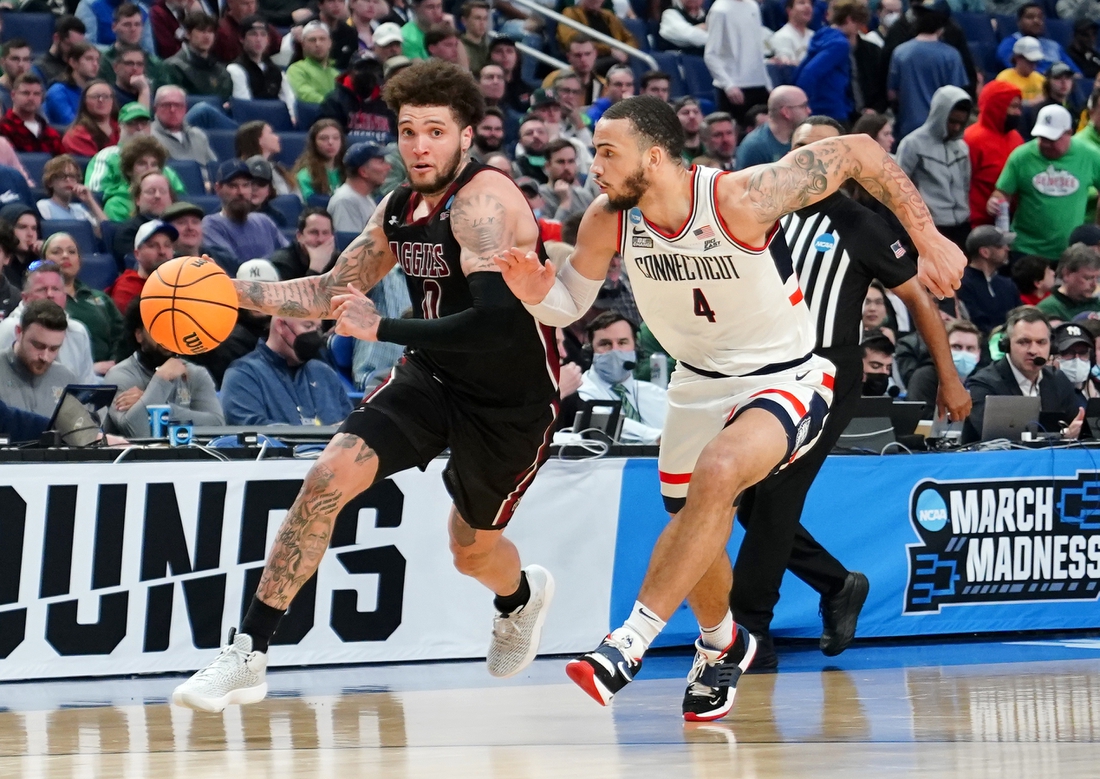 Teddy Allen scored 37 points, including 15 in the final four minutes, to help lead #12 seed New Mexico State to a 70-63 upset victory over #5 seed UConn in Buffalo.

The win snapped a 12-game losing streak in the NCAA Tournament for the Aggies (27-6) dating back to 1993. It set up a second-round game on Saturday against the winner of Thursday’s game between Arkansas and Vermont.

Allen shot 10 of 24 (41.7 percent) from the floor and 4 of 7 from 3-point range, but the free throw line was where he really excelled. Allen was the only Aggie who attempted a free throw all night, but he made all 13 of his attempts, including four inside the final 20 seconds to clinch the victory.

Even after missing his first six shot attempts, he scored 14 points in the first half and found another level in the second half to send the Huskies home.

“It never rattles me,” Allen said about his slow start. “My teammates kept finding me and telling me to shoot it. That’s all you can ask for.”

RJ Cole led UConn (23-10) in scoring with 20 points on 7-of-15 (46.7 percent) shooting, but offense was a major problem for his team all night. UConn scored just 22 points in the first half and spent most of the game playing from behind. The Huskies trailed by 14 points early in the second half as New Mexico State took a 38-24 lead.

The Huskies cut into the lead thanks to Cole and Tyrese Martin, who scored all nine of his points in the second half. The Huskies even came all the way back to tie the game at 58 on a layup by Isaiah Whaley with 2:06 remaining.

But the Aggies closed the game on a 12-5 run, started by Allen’s 3-pointer on the ensuing possession.

New Mexico State will have a chance to advance to the Sweet 16 for the first time since 1992 with a win on Saturday.