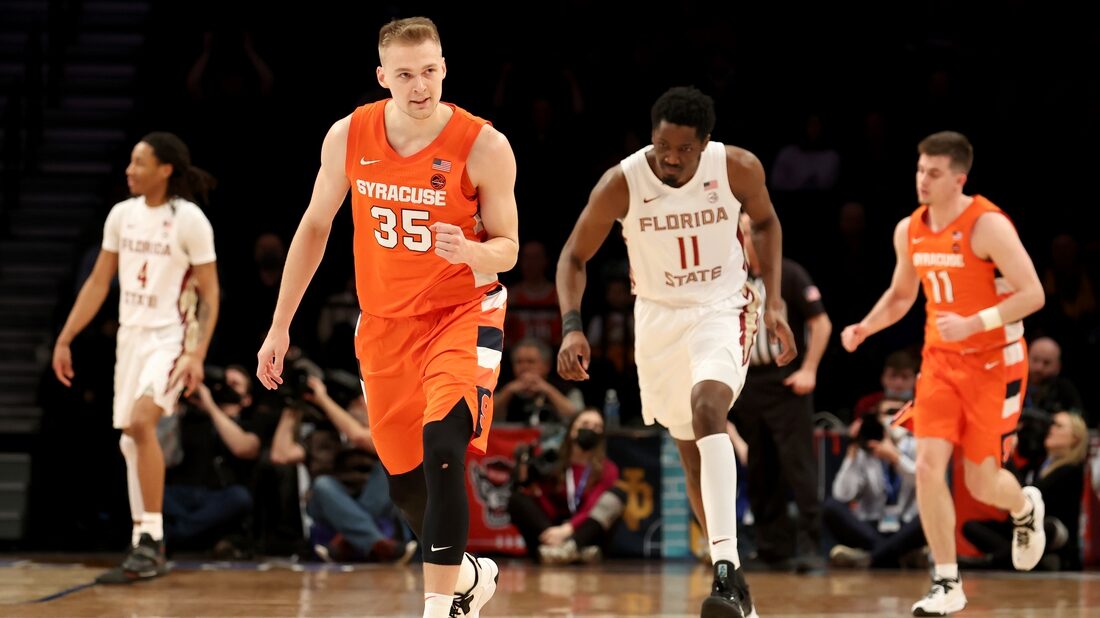 Syracuse standout guard Buddy Boeheim struck Florida State’s Wyatt Wilkes in the stomach during the first half of the Orange’s 96-57 rout of the Seminoles in Wednesday’s Atlantic Coast Conference tournament.

Boeheim and Wilkes were underneath the basket battling for position when Boeheim threw a right-handed punch into Wilkes’ stomach. Wilkes immediately grimaced. No foul was called.

Here is Buddy Boeheim pretty obviously punching a dude in the gut. pic.twitter.com/xIbUSdoiRa

Though replays show differently, Syracuse coach Jim Boeheim — father of Buddy — said his son didn’t hit anyone. He called it an inadvertent swing.

“No, I don’t think he hit him,” Jim Boeheim said in the postgame press conference. “He just swung around and there was contact. The kid pushed him twice. You can’t just let people push you around.”

Asked if he feared Buddy would be suspended, the coach shot back with “For what?”

Florida State coach Leonard Hamilton didn’t seem to have a problem with what occurred.

“I saw the play. There’s not a better kid in the ACC than Buddy Boeheim,” Hamilton said. “I don’t want anything to take away from how well they played and the type of kid he is.

“I know his mother, I know Jim, I know the family so we’re going to move on.”

Buddy Boeheim scored 14 points on 5-of-14 shooting on Wednesday.

It’s possible the ACC could review the incident and discipline the 6-foot-6 senior. Syracuse (16-16) faces #1 seed Duke (26-5) in Thursday’s quarterfinals in New York.

Boeheim released a statement later in the day.

In this article:featured, ncaab, syracuse