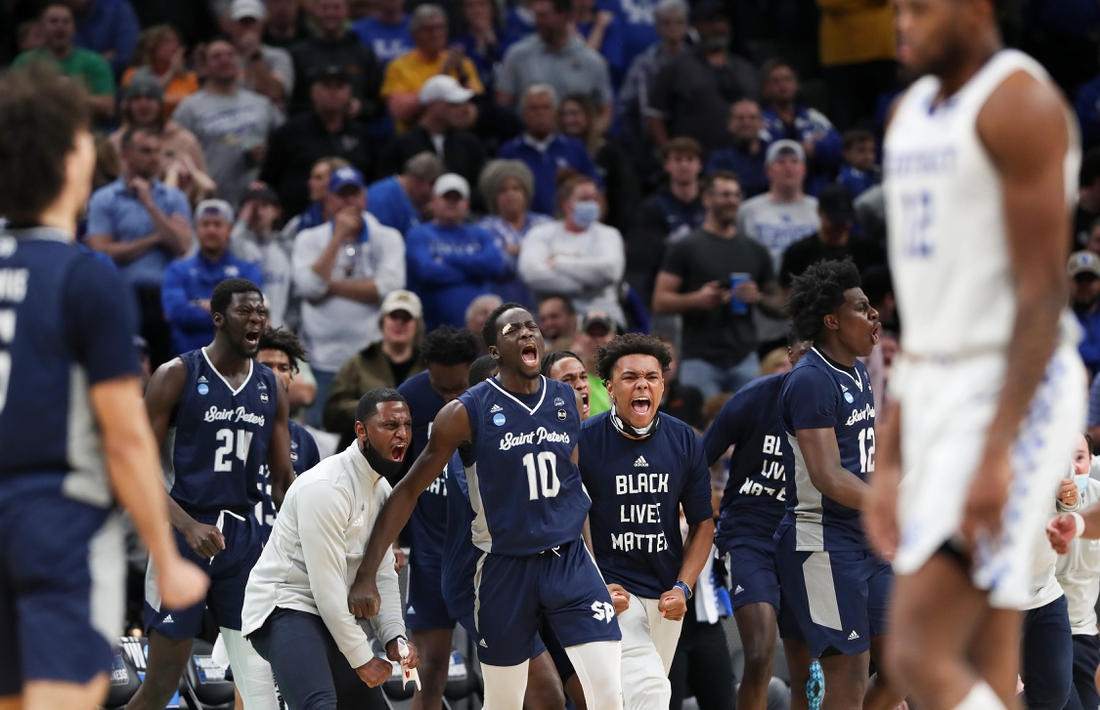 Murray State hits the second round of the NCAA Tournament as the favorite.

The Peacocks are riding high from a memorable takedown of East Region #2 seed Kentucky in overtime on Thursday.

Murray State required overtime to outlast 10th-seeded San Francisco in a game that wrapped at 12:45 a.m. ET on Friday.

“That game defined our team,” Murray State coach Matt McMahon said in the early morning hours Friday following the 92-87 win in OT. “That’s just who they are. They find ways to win. Their toughness and will to win is incredibly special. I’m proud of them for their fight.”

Saint Peter’s scored its first ever tournament win, and a second on Saturday would send the Peacocks to Philadelphia next week.

“I felt like every basketball player’s dream is to play in the NCAA Tournament and make a run in it, and it felt amazing to get this first win and we are looking to get more,” said Saint Peter’s guard Doug Edert.

Coach Shaheen Holloway made believers out of the Peacocks as Saint Peter’s baptized Kentucky in a first-round upset that went to overtime and shattered some brackets on Thursday night.

“This is something these guys understand,” said Holloway, who admits his starting lineup is comprised of the five players that didn’t test positive for COVID-19 during a 28-day pause that threatened their season. “No disrespect to anybody. But we weren’t coming down here just to lose. We came down here to fight. And we did.”

The next challenge for tiny Saint Peter’s, the Jersey City, N.J., university with an enrollment under 2,700, comes Saturday at Indianapolis.

Holloway played point guard at Seton Hall and tells his players they can have all the freedom they want on offense if they’re willing to give even more on the defensive end. On-ball pressure was a constant against Kentucky. Coach John Calipari said his team played tight, but credited Saint Peter’s for throwing off his talented guards.

A quick history lesson might help Holloway in the lead-up to Saturday. Twice #15 seeds have advanced to the Sweet 16, most recently last season: Oral Roberts beat Ohio State and Florida in the first two rounds. In 2013, Florida Gulf Coast crashed the Sweet 16.

“Probably a lot of people don’t even know who we are,” guard Daryl Banks III said of the Peacocks’ relative anonymity in Indy.

And Murray State will by the time the teams tip in the primetime TV slot Saturday night (approx. 7:55 p.m. ET), a fast-forward prep session after likely primarily prepping for Calipari’s #2 seed Wildcats.

“All we know is they are a tough team,” Murray State’s Trae Hannibal, a point guard in a linebacker’s body, said after fouling out in OT against San Francisco. “Our mindset is get refueled and refocused back tonight, and tomorrow we’ll focus on Saint Peter’s and preparing the right way.”

Saint Peter’s is the 10th team to move into the second round of the NCAA Tournament as a #15 seed by beating a #2 seed.

“We just love being the underdogs, going out there fighting, staying together, staying poised and getting the job done,” Peacocks senior KC Ndefo said.

Neither team had an issue finding options to take big shots.