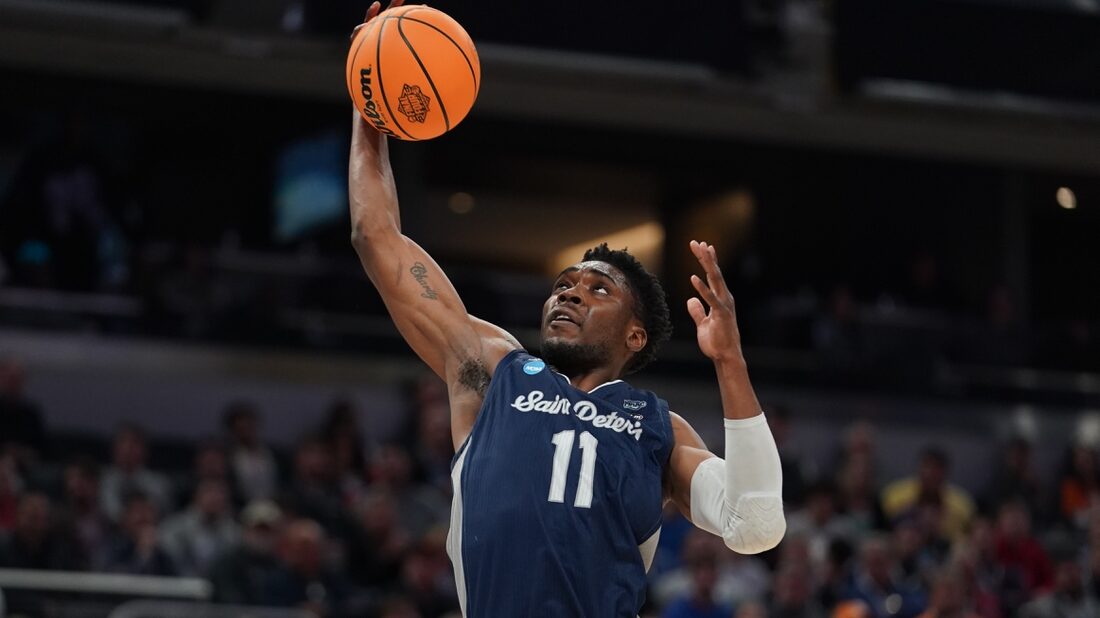 No matter where you are on the court, beware: KC Ndefo is coming to block your shot.

The Saint Peter’s forward tallied six blocks in the #15 seed’s second-round NCAA Tournament win over Murray State. The highlight came in the second half, when he chased down Trae Hannibal and swatted away his fast-break dunk attempt.

Ndefo embodies the defensive intensity Saint Peter’s (21-11) has used to pull off two stunners and advance in the East Region to the Sweet 16, where they’ll play #3 seed Purdue Friday in Philadelphia, Pa.

At 12.5-point underdog at BetRivers, the Peacocks have been backed by 65 percent of the spread-line handle.

“Since he’s been here with me for four years, he’s been our defensive anchor,” Peacocks coach Shaheen Holloway said Tuesday. “His energy and his passion that he brings every day is contagious and we feed off it. That’s why I’m on him a lot — because when he don’t have that energy and that passion, we don’t have it.”

The 6-foot-6 Ndefo ranks 12th in Division I with 2.81 blocks per game — and notably, the 11 players ahead of him are all taller, most of them centers. He entered the transfer portal last offseason, visiting Texas Tech and speaking with other programs, but opted to return.

“Just trying to test the waters,” Ndefo said. “See what was going on in the world. … If I wasn’t here today, to be here in March Madness with my brothers, then I probably would regret it. But I’m here, I’m grateful.”

Ndefo won Metro Atlantic Athletic Conference Defensive Player of the Year for the third time, but Holloway was miffed that he wasn’t named first-team All-MAAC, saying earlier this month that voters should be “ashamed.”

Fast forward to today, and now the basketball world can’t get enough of Saint Peter’s, the third team ever to reach the Sweet 16 as a #15 seed. The Peacocks’ relentless defense stopped #2 Kentucky and #7 Murray State last week.

Purdue coach Matt Painter, whose offense ranks 12th nationally with 79.8 points per game, is tasked with figuring out how to beat it.

“They’re very aggressive on the basketball,” Painter said. “They take things away, they try to knock you out in the post, but they have interchangeable parts. So, they have a lot of those hybrid forwards that can play the three and the four, that are long, that’ll block your shot, that’ll contest high.”

Purdue (29-7) spent a short stint at #1 in the country earlier this season and only lost one game by double digits. It breezed past Yale 78-56 in the first round last week before holding off #6 Texas 81-71 Sunday night.

Dynamic NBA prospect Jaden Ivey has led the Boilermakers with 17.6 points and 3.1 assists per game. They also have leaned on two giants in the post, 7-foot-4 Zach Edey and 6-foot-10 Trevion Williams. Though he has mostly come off the bench this season, Williams plays a key role at both ends of the court and led Purdue with 22 points on 10-of-13 shooting in the win over Texas.

Balancing these players and their different skill sets has been a key to the offense, Painter said.

“No matter who you’re playing, no matter how tall they are or how big they are, you just got to keep working for your position and then take what they give you,” Painter said.

While Purdue has reached the Sweet 16 in four of the past five tournaments, Saint Peter’s is the newcomer, attracting more attention than ever before. Holloway has made the media rounds, including an interview on “Good Morning America.”

But he doesn’t think playing the role of Cinderella darling adds any external pressure on him or his team.

“I think all the pressure’s on them, to be honest,” Holloway said. “We’re out here just balling, having fun.”