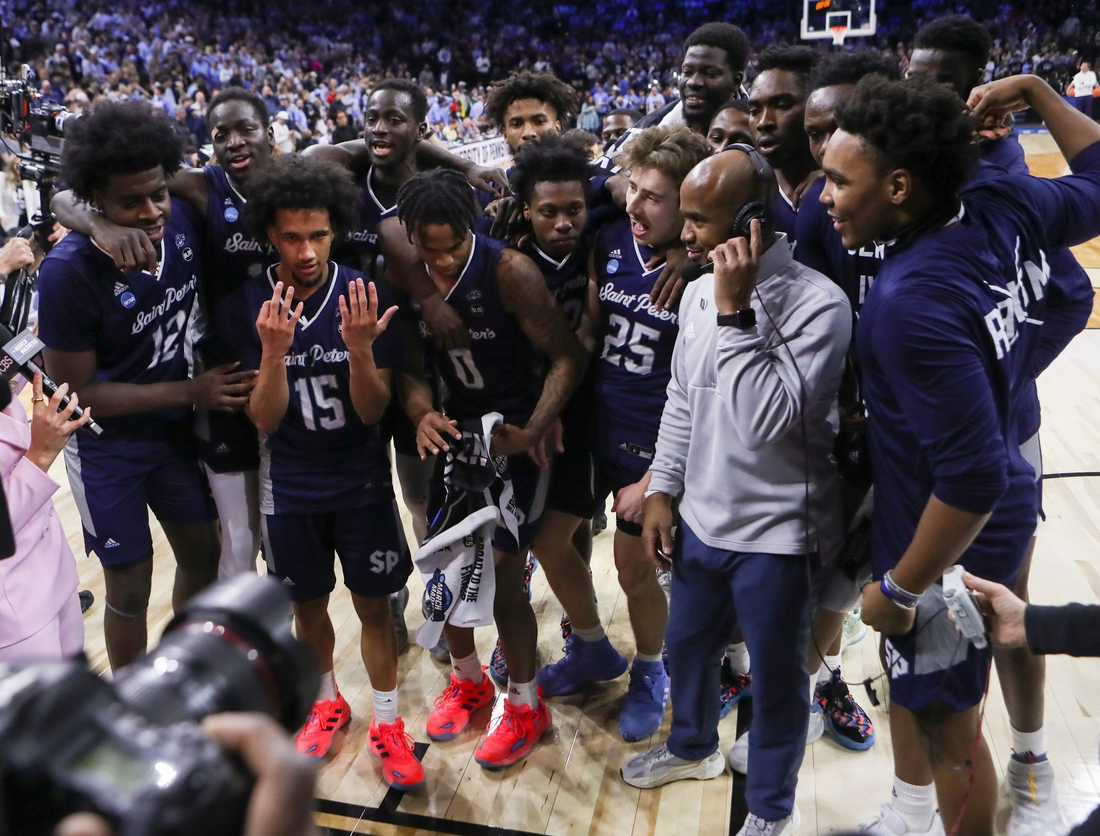 PHILADELPHIA — Shaheen Holloway and Hubert Davis have two things in common. Neither was expected to be here, and both refuse to hog any of the spotlight from their players.

After Holloway guided tiny Saint Peter’s to a championship in the Metro Atlantic Athletic Conference, he became a shooting star in the coaching ranks as the 15th-seeded Peacocks felled Kentucky, Murray State and Purdue in the NCAA Tournament. He is widely expected to be offered the vacant coaching job at his alma mater, Seton Hall, but will not address what he calls “rumors.”

In his first year as a head coach, Davis led his own alma mater to an eighth seed and upsets of #1 seed Baylor and #4 UCLA to reach the Elite Eight. But he declined a question Friday night about what his accomplishment meant to him.

“It’s just not about me at all,” Davis said. “Coaching is an act of service.”

One of these men will take his program to the Final Four in improbable fashion when the Tar Heels (27-9) and Peacocks (22-11) meet Sunday in the East Region’s Elite Eight game.

North Carolina opened at 8.0-point favorites at DraftKings and PointsBet, but the line has moved to 8.5 at the later despite St. Peter’s backed by 73 percent of the spread bets and 61 percent of the handle. The Tar Heels have drawn 3.9 percent of the national title bets at PointsBet compared to 5.3 percent for the Peacocks.

St. Peter’s is also being supported by 71 percent of the spread bets and 59 percent of the money at DraftKings. The Peacocks have also drawn 5 percent of the national title bets at the sportsbook while the Tar Heels still aren’t among the top 10 since the start of the tournament.

Saint Peter’s defeated Purdue 67-64 Friday in the Sweet 16, using its signature relentless defense to bottle up NBA prospect Jaden Ivey, who finished with just nine points on 4-of-12 shooting with six turnovers. Purdue was rated the most efficient offense in the country by KenPom.com entering the game.

“Coach did a great job preparing us with the scout,” said Daryl Banks III, who scored a team-high 14 points. “We knew their tendencies and what they did. We knew they were also going to go inside a lot with the height difference with us. But we just stuck to our defensive principles, executed when we needed to, and it worked out for us.”

The Peacocks are now the lowest seed ever to advance this far in NCAA Tournament history. They’ve captured the imaginations of sports fans around the country, but in particular in Jersey City and throughout the state of New Jersey. Their regional games being held in Philadelphia gave the Peacocks an unmistakable home-court advantage.

“I can’t believe the support that we’re having,” Holloway said. “This is unbelievable. Jersey City has been unbelievable for us. But I want to give a shout-out to our student-athletes and the whole student body. They’re taking buses down here, they’re doing videos, a watch party. It’s been tremendous.”

“The thing that just jumps right out is how much his players love playing for him, and they have his personality,” Davis said. “They have a chip on their shoulder and a toughness and a confidence to give everything that they have on both ends of the floor on every play.

“Tremendous chemistry. On Sunday it’ll be our toughest game of the year.”

That speaks volumes considering the road North Carolina has forged to this point. The Tar Heels spoiled Mike Krzyzewski’s final home game as the coach at Duke with a 94-81 stunner on March 5. It came as part of a prolonged stretch in which the Tar Heels have won 15 of 18 games, including taking down defending national champion Baylor in the tourney’s second round.

Caleb Love scored a career-high 30 points Friday, 27 in the second half, as North Carolina beat UCLA 73-66 with Davis’ retired predecessor Roy Williams watching from the stands.

“Coach Davis just wanted me to attack the basket,” Love said. “He feels that I’m best … when I’m best going downhill. I got a few layups going, getting downhill, and then the outside shot started to fall. Once you get those, see them go through, your rhythm is there.”

If both teams win their Elite Eight games this weekend, North Carolina and Duke would meet in the Final Four in New Orleans. The rivals have never played one another in the NCAA Tournament.