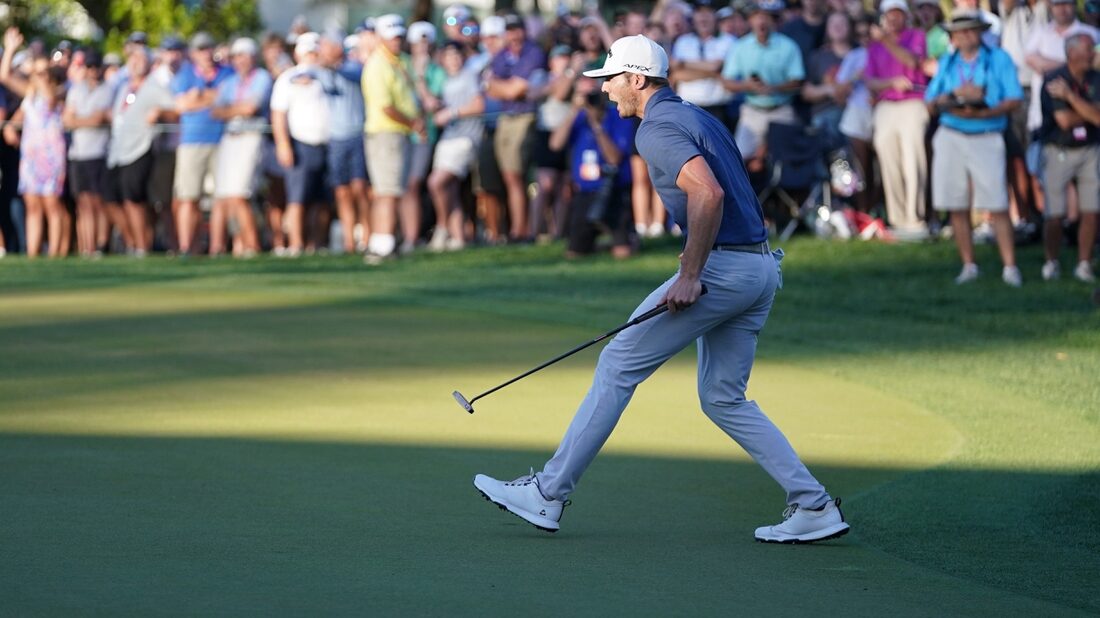 Sam Burns drained a 33-foot putt on the second playoff hole to successfully defend his title at the Valspar Championship on Sunday in Palm Harbor, Fla.

Burns is projected to move into the top 10 of the Official World Golf Ranking following his third career victory, which came after a dramatic finish on the Copperhead course at Innisbrook Resort.

Overnight leader Davis Riley triple-bogeyed the fifth hole — the only triple on a par-5 by anyone in the field all week. Meanwhile, Burns went 3 under through his first 12 holes to take the lead.

Burns held a two-shot lead before he bogeyed the par-3 17th — needing a lengthy putt to avoid double. Playing in the group behind, Riley hit the closest shot of the day and converted the birdie to tie Burns at 17 under.

The 2014 U.S. Junior Ryder Cup teammates returned to the 18th for the first hole of sudden death. Riley salvaged par from a green-side bunker while Burns again missed a birdie attempt left.

The playoff moved to the 16th hole, where Burns was on the green but just farther away than Riley, whose approach bounced into the rough. Burns&rsquor; birdie putt circled the cup and dropped and Riley was unable to sink his chip shot to force another hole.

Burns was tied for the best in the field in going 5 under for the week on Nos. 16-18, dubbed the “Snake Pit.” His putter repeatedly got him out of trouble, including a 5-footer for par on the first playoff hole.

Burns earned $1.4 million with the victory and joined Patrick Cantlay as the only players with three wins on tour since the 2021 Valspar.

Burns said he visited with his coach Brad Pullin after shooting a 76 in the final round of The Players Championship to fall out of contention with a tie for 26th.

“I said, ‘Hey man, I just need some help,'” Burns said. “A huge thanks to you Brad, I couldn&rsquor;t do it without you. Just a lot of hard work.”

Riley, a fellow 25-year-old who entered the week ranked 399th in the world, would have vaulted up almost 300 spots with a victory. Regardless, the two-time Korn Ferry Tour winner secured his best PGA Tour finish to date.

“I got punched in the mouth pretty early,” Riley said of the triple. “Clawed back. I knew if I just kept staying in it I&rsquor;d have a chance to win. Unfortunately, I just didn&rsquor;t have my best stuff today.”

Playing with Burns, Justin Thomas was one shot back when the pair reached the 18th hole. Thomas found a bunker with his drive and was forced to lay up, all but taking him out of contention.

Thomas was able to salvage par and tied for third at 16 under with Matthew NeSmith, who also posted his best finish on tour in his 72nd career start.

England&rsquor;s Matthew Fitzpatrick and American Brian Harman tied for fifth at 14 under.

The low round of the day was Brooks Koepka&rsquor;s 6-under 65. It was two shots better than anyone else in the field and vaulted the four-time major winner 33 spots into a tie for 12th at 11 under.

Second-ranked Collin Morikawa struggled to a 2-over 73 on Sunday to tie for 66th, while third-ranked Viktor Hovland finished in a tie for 33rd.