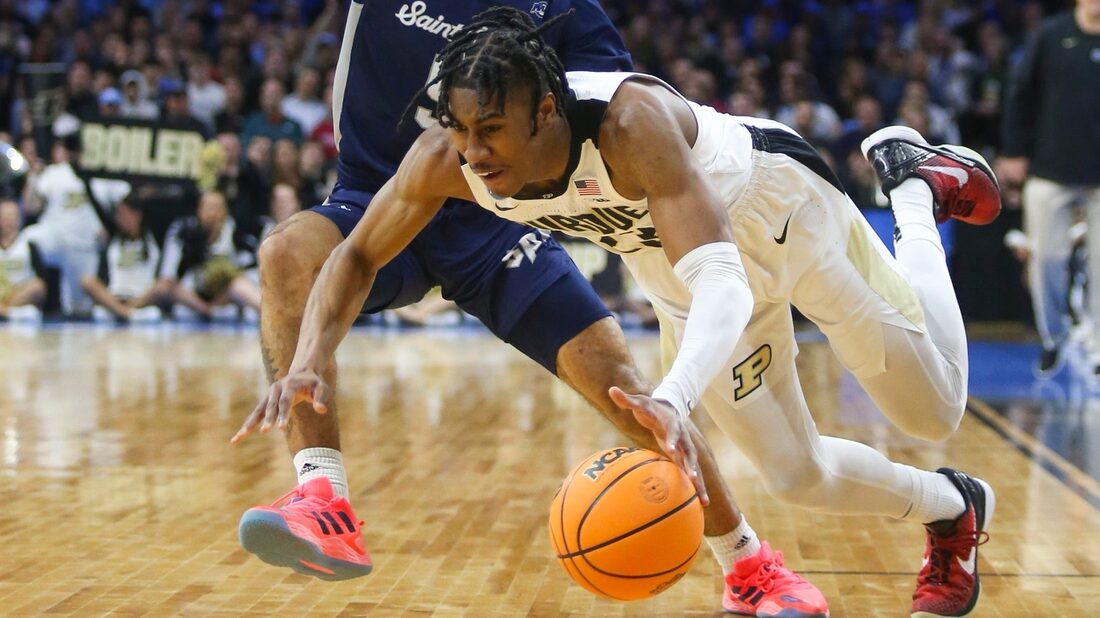 Daryl Banks III scored 14 points, Clarence Rupert had 11 — all in the first half — and the Peacocks took down third-seeded Purdue 67-64 in an East Region Sweet 16 game Friday in Philadelphia to become the first team in NCAA Tournament history to make the Elite Eight as a #15 seed.

Saint Peter’s (22-11) overcame Purdue star Trevion Williams’ 16 points and eight rebounds. The Peacocks once again applied their aggressive defense and forced 15 turnovers before outshooting the Boilermakers (29-8) down the stretch.

Banks tied the game at 57 with a jumper for Saint Peter’s, and Purdue’s ensuing shot to beat the shot clock missed the rim. Banks made it 59-57 with a floating layup, and Williams was crowded inside to force a missed shot.

Free throws brought it to 63-59 before Mason Gillis’ putback of a missed trey trimmed it back to two with 25.8 seconds left. Banks made two more foul shots, and Jaden Ivey responded for Purdue with a 3-pointer with eight seconds to play.

But Doug Edert, one of the faces of Saint Peter’s tourney run, made the game-clinching free throws with 4.1 seconds left. He finished with 10 points and drew the love of the heavily pro-Saint Peter’s crowd.

Edert tied the game at 17 when he knocked down a 3-pointer, his only basket of the half. A minute later, Jaylen Murray grabbed a steal and was fouled on the fast break, with his resulting free throws pushing the Peacocks ahead. Stefanovic guided Purdue back with two open 3-pointers.

The Boilermakers took the lead 33-27 on a 6-0 run completed when Stefanovic made a nimble cut and caught Williams’ feed for a layup. But Murray got a layup to fall at the buzzer to bring Saint Peter’s within 33-29 at halftime.

Saint Peter’s opened the second half with an 8-0 run to regain the lead while holding Purdue scoreless for the first 5:47. The stretch included a Purdue shot-clock violation induced by stifling defense.

Purdue coach Matt Painter used a timeout to reset. The Boilermakers returned and scored the next eight points, with three straight buckets by Williams.

Isiah Dasher and Matthew Lee hit 3-pointers to tie the game at 45-45, but KC Ndefo earned his fourth foul and Purdue entered the bonus with 9:04 to play.