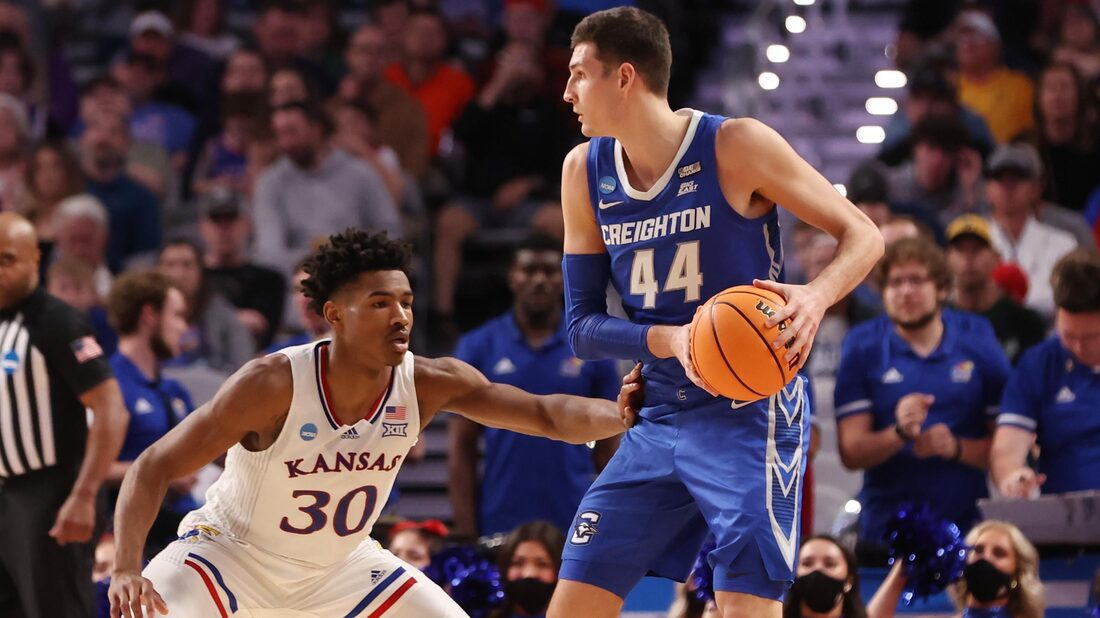 Reserve Remy Martin led Kansas scorers for the second straight game in the NCAA Tournament with 20 points and Jalen Wilson added a double-double Saturday as the top-seeded Jayhawks outlasted #9 seed Creighton 79-72 at Fort Worth, Texas.

The Bluejays (23-12) played short-handed after the loss of inside threat Ryan Kalkbrenner, who suffered a knee injury in the first round. Yet Creighton waged a gallant effort behind 24 points and 12 rebounds from Arthur Kaluma.

But the Jayhawks (30-6) made enough plays down the stretch to advance to next week’s Midwest Regional. The 30-win season is the 16th for Kansas, which tied Kentucky for most all-time wins (2,353). The Sweet 16 appearance will be the Jayhawks’ 24th.

“Creighton played great, shot unbelievable from the arc and we didn’t defend it very well first half,” Jayhawks coach Bill Self said. “But you’ve got to win games when it’s kind of ugly and I don’t know if we could have won this game two months ago playing this way. I’m proud of our guys. I thought we defended and rebounded pretty well for most of the night, and then we had some guys step up and make some big free throws late.”

Ochai Agbaji, a consensus All-American, did not make his first field goal until 18:34 remained but he converted a steal of an errant Creighton pass into a layup for a 75-72 lead with 55 seconds left. Agbaji added 15 points.

David McCormack then swatted a shot with 49 seconds left and the Jayhawks got another stop with 17 seconds left after two 3-point misses by the Bluejays.

Wilson recorded 14 points and 14 rebounds. Christian Braun added 13 points as Kansas overcame 40.9 percent shooting with a 47-31 advantage on the glass.

Martin did not enter until the first TV timeout at the 14:13 mark. He netted his first basket 12 seconds later and scored 16 first-half points on 6-of-9 shooting as the Jayhawks grabbed a narrow 39-38 margin at the break.

His first basket was part of a 14-3 flurry but the Bluejays rallied behind the inside presence of Kaluma and the outside shooting of Hawkins as they combined for 24 points. Short on bigs, Creighton relied on shots behind the arc and made 8 of 15 first-half treys.