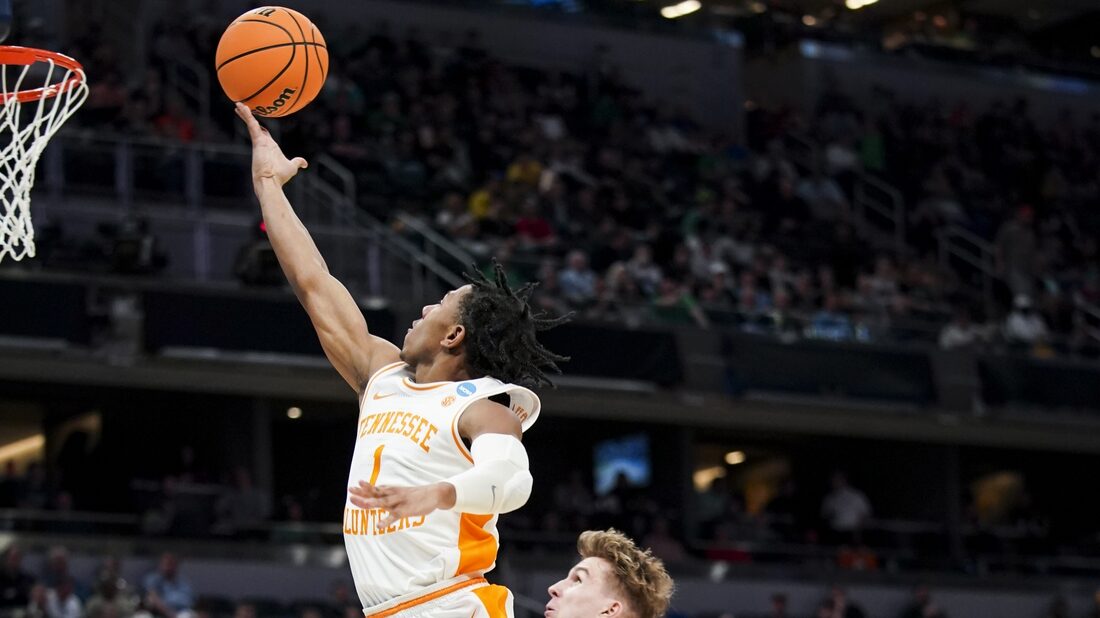 INDIANAPOLIS — Driven by a perceived Selection Sunday slight, Tennessee had a message for the doubters Thursday: Take this seed and plant it.

The Vols smothered 14th-seeded Longwood 88-56 in a first round NCAA Tournament statement victory in Indianapolis.

The South Region #3 seed, Tennessee (27-7) won its eighth game in row and returns to the same court Saturday to face #11 seed Michigan.

Santiago Vescovi scored 18 points, Josiah-Jordan James had 17 with nine rebounds and Tennessee force fed a basketball clinic to underdog Longwood with 29 assists on 33 field goals and 22 points off turnovers.

The Vols openly ran with their stars through mop-up duty to finish the first-round victory with added emphasis.

SEC tournament MVP Kennedy Chandler made two open 3s to give the Vols a 36-point lead with 5:50 to play, then was fouled trying to dunk in transition.
Chandler finished with 13 points, five assists and five rebounds.

The St. Patrick’s Day celebration was all white and orange at Gainbridge Fieldhouse.

Longwood was led by guard Justin Hill’s 13 points and had 16 turnovers.

A 13-0 Tennessee run to end the first half deflated Longwood (26-7) and the Vols maintained all-gas, no-brake focus as Rick Barnes secured his 25th career tournament win. Barnes said this week Tennessee would respond to being a 3 seed. Tennessee’s lead hovered around 30 points for most of the second half.

The Vols are 13-1 in their last 14 games, including the SEC tournament championship and two wins over Kentucky.

Exasperated Longwood coach Griff Aldrich led the Lancers to the program’s first ever NCAA Tournament appearance and was the lone source of energy in the second half as he watched the flammable Volunteers thrive.

Tennessee flexed into overdrive, forced 11 turnovers and poured in a season-high 54 points on 66.7 percent shooting (18 assists on 20 field goals, 8 of 13 from 3-point range) in the opening half to lead by 25.

Vescovi scorched the nets with three of Tennessee’s four 3-pointers in the first-half burst that stretched the Vols’ lead to 41-26. The lefty nailed another with 2:32 remaining to push his point total to 12 before one of his shots finally touched rim. He landed another with 14:40 left in the game that gave Tennessee a 67-34 edge.

Michigan is 2-0 against Tennessee in the NCAA Tournament, including a Sweet 16 win in Indianapolis in 2014.