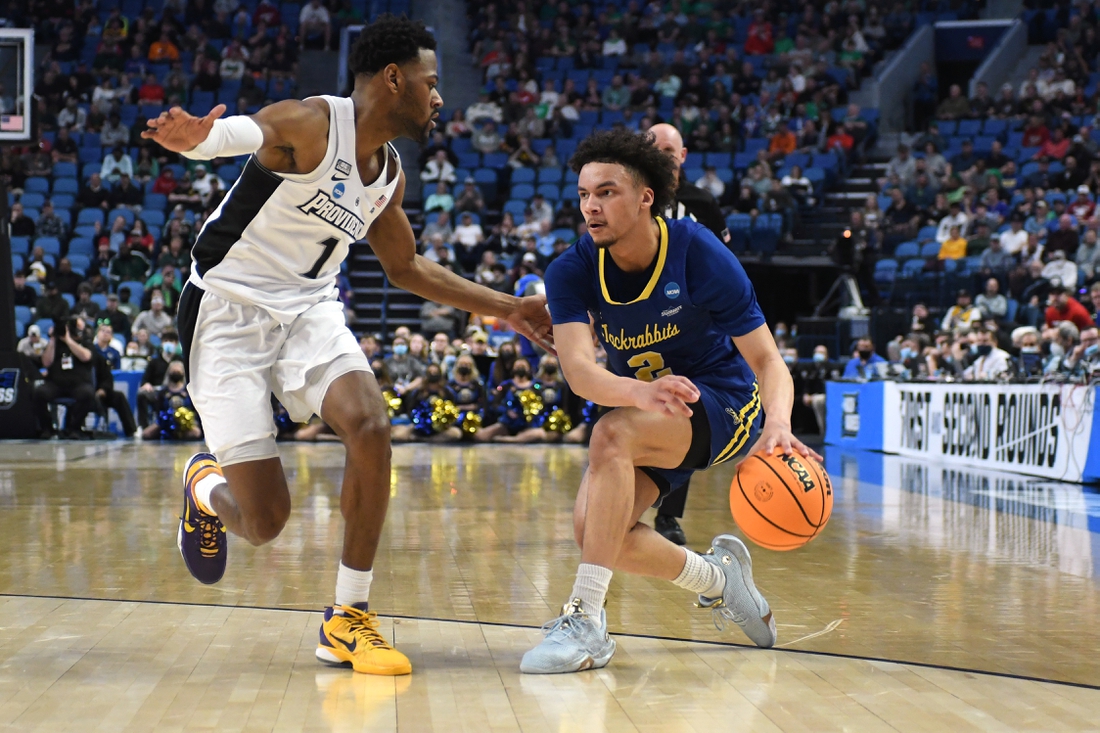 Al Durham and Noah Horchler each scored 13 points as fourth-seeded Providence held off #13 South Dakota State 66-57 Thursday in a first-round game of the NCAA Tournament Midwest Region in Buffalo.

Providence (26-5) snapped South Dakota State’s 21-game winning streak and held the regular-season and tournament champions of the Summit League to 7-for-23 (30.4 percent) shooting from 3-point range. SDSU entered as the best 3-point shooting team in the nation.

The Friars advance to a second-round game to be played Saturday.

Providence coach Ed Cooley credited his team for being “determined” and “focused” in a TV interview immediately after the game.

“Our guys had an incredible understanding of what (the Jackrabbits) were trying to do. … I’m proud of our guys’ resiliency and tenacity defensively.”

Baylor Scheierman had 18 points and 10 rebounds, and Alex Arians and Douglas Wilson each scored 13 points for the Jackrabbits.

Arians’ three-point play with 2:36 left trimmed Providence’s lead to 56-53, but the Friars finally broke a scoring drought of 2:29 when Durham made two foul shots with 2:23 left. Zeke Mayo answered for the Jackrabbits with two free throws to again cut the deficit to three, but Jared Bynum’s short jumper gave Providence a 60-55 lead.

Scheierman scored on a layup to cut the deficit to 60-57 with 59 seconds left, but Wilson fouled Bynum on a deep 3-point attempt with 29 seconds to go. Bynum made all three foul shots for a 63-57 lead.

A replay review confirmed a South Dakota State turnover, and Bynum made one of two foul shots before Mayo missed a 3-point attempt. Horchler finished the scoring with two free throws with 7.9 seconds left.

Scheierman opened the second-half scoring with a 3-pointer 13 seconds into the period, cutting the Jackrabbits’ deficit to 31-26. But the Friars answered quickly with a 12-3 spurt, capped by Horchler’s three to take a 43-29 lead with 15:59 left.

But Providence then went cold, and South Dakota State cut the deficit to 43-37 on Arians’ bank shot with 12:38 to go.