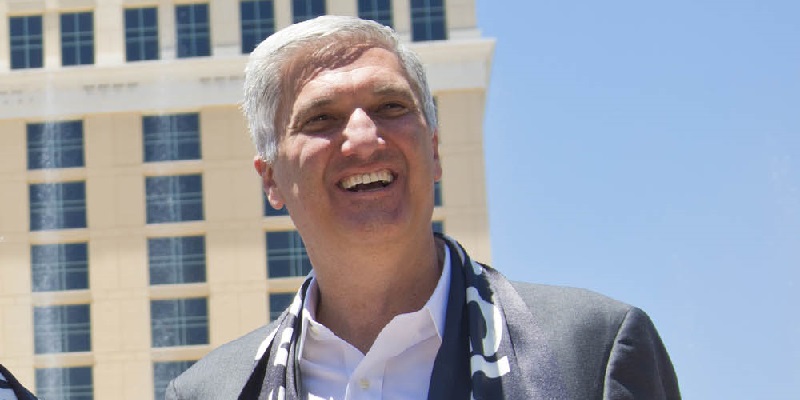 George Kliavkoff, the president of entertainment and sports for MGM Resorts International, was announced as the Pac-12’s next commissioner on Thursday.

Per the conference, the appointment of Kliavkoff, 54, was supported by a unanimous vote of all Pac-12 presidents and chancellors. His five-year contract begins July 1.

“I am thrilled to be the Pac-12 Commissioner. This is a challenging time for intercollegiate athletics, but I believe these challenges also create significant opportunities,” Kliavkoff said. “I loved being a student-athlete, and I’m passionate about the doors that college sports and higher education open for young women and men. My job at the Pac-12 will be to help manage the balance between continued academic excellence, student-athlete well-being and an even higher level of athletic achievement.”

Kliavkoff replaces outgoing commissioner Larry Scott, who has served as the conference’s commissioner since 2009. The Pac-12 announced on Jan. 20 that Scott will step down from his role on June 30.

Kliavkoff has served as the president of entertainment and sports for MGM Resorts International since 2018.

He previously was the executive vice president of MLB Advanced Media from 2003-06, chief digital officer of NBCUniversal from 2006-08 and a board member and interim CEO at Hulu from 2007-08.

Kliavkoff also is a sports and entertainment law attorney and is a 1993 graduate of the University of Virginia Law School. That background should prove beneficial given the forthcoming legal challenges facing college sports.

“At each step of his career, George has navigated complex, quickly changing environments and has been a successful consensus builder,” said University of Oregon President Michael H. Schill, chair of the five-member search committee.

“George is a visionary leader with an extraordinary background as a pioneering sports, entertainment and digital media executive, and we are delighted and honored that he has agreed to become our next Pac-12 Commissioner.”

In January, Scott, the governing executive committee and school presidents reached a mutual agreement not to pursue a new contract. Scott had been under contract until June 2022, but he will exit a year early after aiding in the transition to his successor.

In this article:featured, ncaab, Pac-12