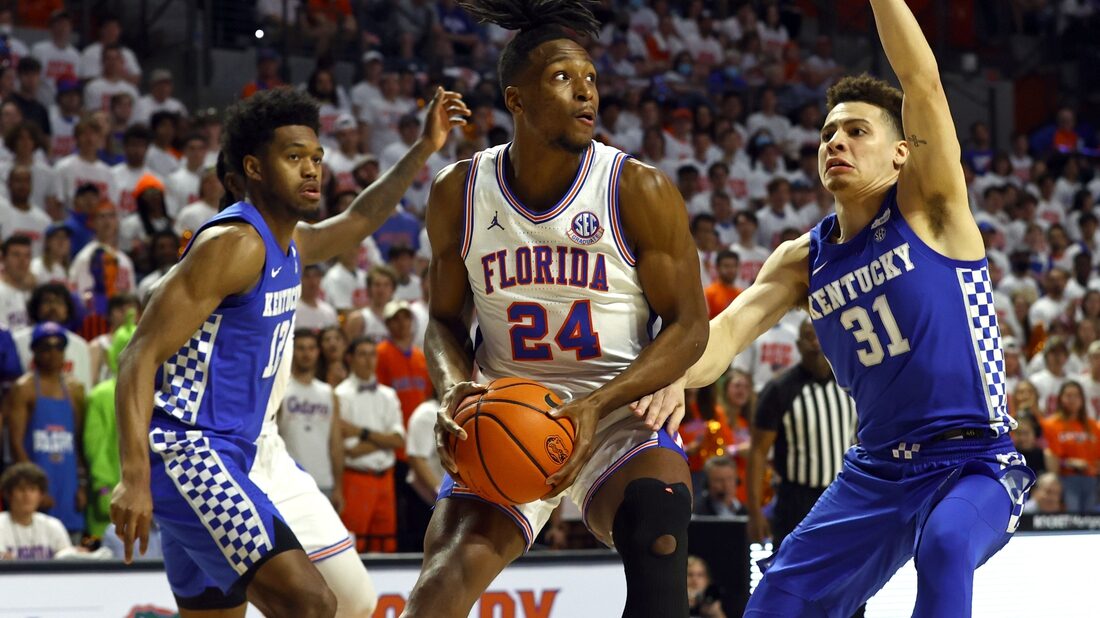 Inside force Oscar Tshiebwe produced 27 points and 15 rebounds for his 25th double-double as #7 Kentucky closed its Southeastern Conference regular season Saturday with a 71-63 victory over Florida in Gainesville, Fla.

Tshiebwe made 11 of 16 field goals and went 5-for-5 at the stripe. He produced 11 straight points for his team early in the second half as he notched his 13th straight double-double.

Kentucky locked down the #3 seed in next week&rsquor;s SEC tournament in Tampa, Fla. It won for the seventh time in the past eight contests against Florida, including four straight on the road.

The loss was a severe blow to Florida&rsquor;s chances of earning an at-large berth in the NCAA tournament. It holds just a 2-9 record against Quad 1 competition.

The club cut the deficit to 38-31 in the first 1:11 of the second half, but Tshiebwe&rsquor;s presence in the paint thwarted any chance of a serious Florida rally.

Colin Castleton posted 23 and 11 rebounds and Anthony Duruji added 10 points. But the team shot 41 percent from the field and was just 3 of 20 from deep (15 percent).

The Wildcats opened their SEC finale by racing out on a 7-0 run behind layups by TyTy Washington Jr. and Keion Brooks Jr. and a trey from Wheeler in just over a minute of play.

Kentucky&rsquor;s 9-0 run put them ahead 25-11 after nearly 11 minutes had expired in the half — getting points from seven different players — while only Castleton and Duruji scored for the Gators.

The visitors held their largest lead at 32-16 on Tshiebwe&rsquor;s mid-range jumper with 6:03 left. After Florida went off on a 10-0 stretch, Kentucky answered with a 6-0 run for a 38-26 halftime lead.

Tshiebwe collected 12 points and 11 rebounds in the half, while Florida&rsquor;s distance shooting was a poor 2 of 10 (20 percent).

In this article:cbb-uk, florida, kentucky, ncaab