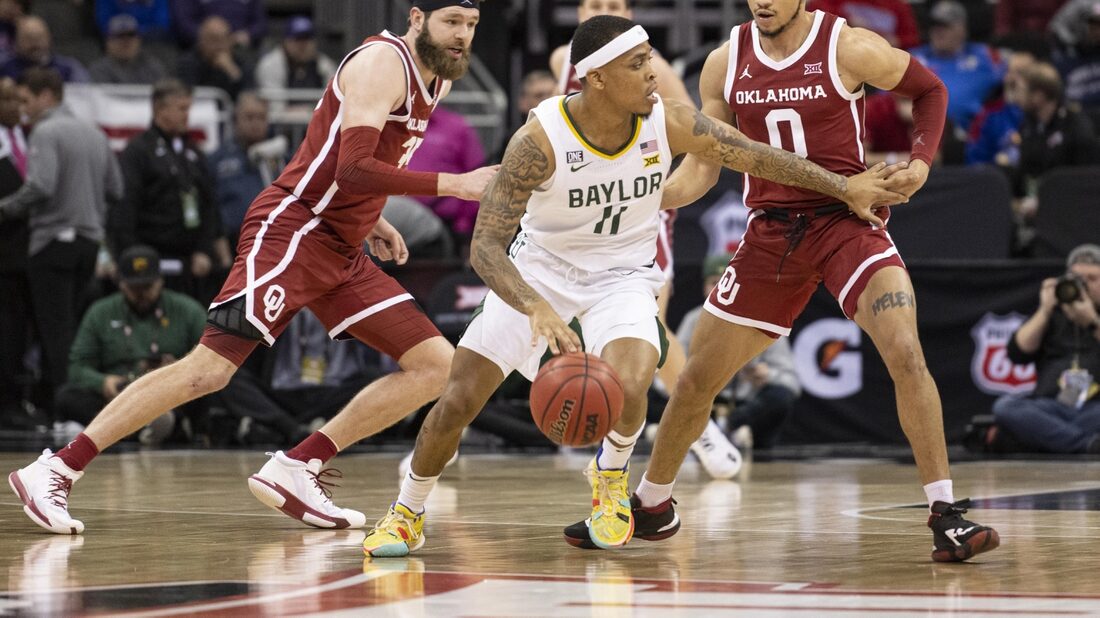 Jacob Groves scored a season-high 15 points as Oklahoma knocked off #3 Baylor 72-67 in the quarterfinals of the Big 12 tournament on Thursday in Kansas City, Mo.

The Sooners bolstered their NCAA Tournament case with their fourth consecutive win, while the Bears&rsquor; five-game winning streak was snapped.

The Sooners looked buried plenty of times this season and a few times Thursday.

But just like it did at the end of the regular season – winning three consecutive games to climb out of the bottom two spots in the conference – Oklahoma kept scratching and clawing back.

Baylor kept the game tight, pulling within one with 3:27 left before the Sooners reeled off a 7-0 run to put the game away.

A three-point play by Umoja Gibson in the final minute was the dagger. Groves scored 12 of his points in the second half, after the Sooners trailed by six at the break.

The Sooners had just five turnovers after the break — 16 for the game — while scoring 10 points on the Bears&rsquor; five second-half turnovers. Baylor had six turnovers total.

Oklahoma shot 63 percent from the field in the second half, including 6 of 9 from beyond the 3-point line.

The Sooners started strong, jumping out to a 7-0 lead less than two minutes into the game and had Baylor&rsquor;s offense disconcerted for much of the game&rsquor;s first 10 minutes.

But then Baylor started coming alive, turning up the pressure defensively, settling in on the boards and racking up points near the basket.

The Bears ended the half on a 12-2 run, taking their first lead on Dale Bonner&rsquor;s 3-pointer with less than two minutes remaining in the first half.

Baylor turned the ball over just once in the first half, while forcing 11 Oklahoma turnovers. The Bears turned those giveaways into 13 points on the other end.