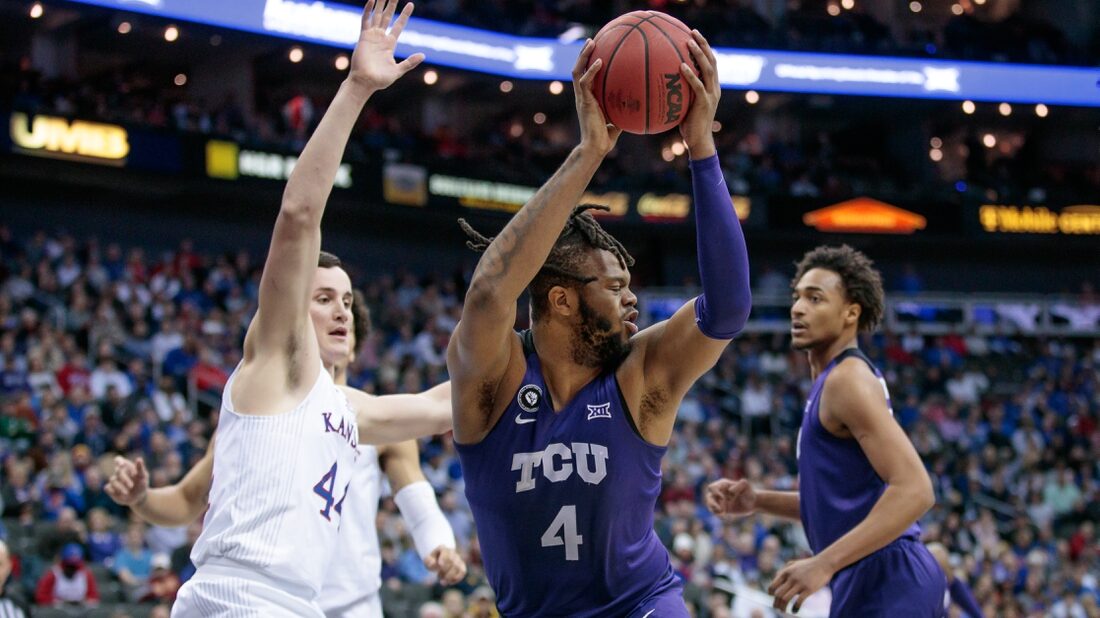 Ochai Agbaji continued to assert himself as the Big 12’s best player by scoring 22 points Friday as #6 Kansas downed TCU 75-62 in the semifinals of the Big 12 tournament at Kansas City, Mo.

Named the league’s player of the year earlier this week, Agbaji followed an 18-point performance in Thursday’s quarterfinals by leading the Jayhawks (27-6) to within one win of their 16th conference tournament title.

Playing the Horned Frogs (20-12) for the third time in 11 days, the Jayhawks committed just seven turnovers while forcing 18, as they coasted easily after splitting the previous two matchups.

Mitch Lightfoot came off the bench to score a career-high 15 points on 6-for-8 shooting. Another sub, Remy Martin, added 10 points after being slowed by a knee injury through much of the Big 12 schedule.

Kansas has won its first two tourney games by an average of 18.5 points while attempting to earn a #1 seed in the NCAA Tournament.

TCU, which overcame a 20-point deficit to defeat Texas in Thursday’s quarterfinals, could not deliver the same come-from-behind flourish against Kansas. The Frogs made their first five attempts of the second half but never threatened.

Kansas made eight straight shots late in the first half and led 44-30 at the break behind 13 points from Agbaji. The Wooden Award finalist made 5 of 8 first-half shots while the Jayhawks committed just two turnovers and forced nine.

TCU got eight first-half points from Miles, who played on a tender ankle he sprained in the Frogs’ stirring comeback win over Texas. Lampkin injured his foot in Friday’s pregame shootaround but remained in TCU’s starting lineup alongside Miles.

The Frogs, who committed three straight shot clock violations early in the first half, scored the final five points after the Jayhawks had grabbed a 44-25 margin.

The Jayhawks’ win came before Friday’s other semifinal matchup, which pitted Oklahoma against Texas Tech.