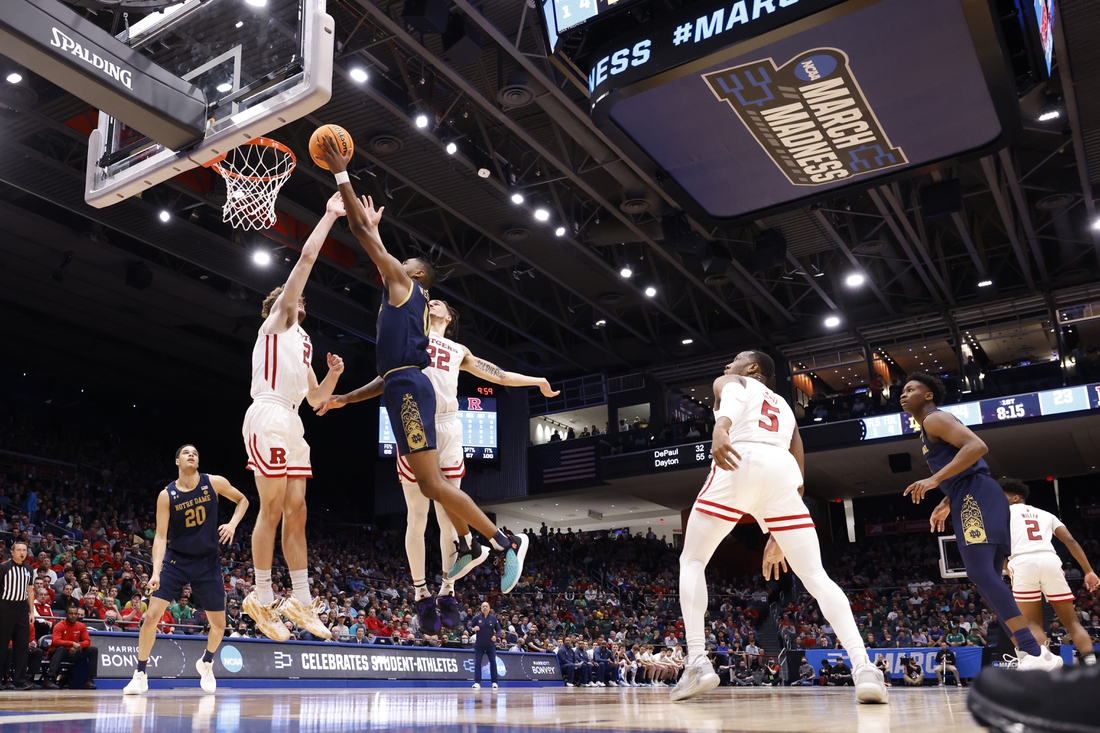 Paul Atkinson Jr. scored a game-high 26 points and made the game-winning putback with 1.4 seconds left in double overtime to lift Notre Dame past Rutgers 89-87 in the First Four Wednesday night in Dayton, Ohio.

Atkinson made 13 of 15 shots to set a season high in scoring as #11 seed Notre Dame advanced in the West Region to play #6 seed Alabama on Friday in San Diego.

Caleb McConnell led Rutgers with a season-high 23 points on 10-of-12 shooting, and Ron Harper Jr. scored 22. McConnell, the Big Ten Defensive Player of the Year, added 11 rebounds, a block and a steal to his surprise score line.

Harper, who made game-winning 3-pointers to beat Purdue and Indiana earlier in the season, drilled a deep 3 to knot it 87-all with 22 seconds left in the second overtime. Notre Dame drove down the floor, Blake Wesley missed a layup and Atkinson was in perfect position for the putback.

Geo Baker (19 points, six rebounds, five assists) scored the Scarlet Knights’ final nine points of the second half, including a 3-pointer to tie it at 67 and an iso jumper to make it 69-all. Neither team made potential go-ahead shots after that, leading to overtime.

Notre Dame led 75-73 in the first overtime when Harper banked in a go-ahead 3-pointer. Later, Paul Mulcahy’s inbounds pass to Harper went askew and Cormac Ryan (16 points) stole it for a lay-in. Mulcahy responded by nailing a 3-pointer with 8 seconds left, but Wesley drove in for a layup to force the second extra frame.

Nate Laszewski added 18 points and Dane Goodwin chipped in 12 for the Fighting Irish. Rutgers’ Clifford Omoruyi had 15 points and six rebounds, with six of his seven field goals coming on dunks.

Notre Dame missed a shot with five seconds before halftime, and McConnell broke free down the court, caught an outlet pass and made a layup at the buzzer for a 41-36 Rutgers lead at the break. That brought McConnell up to 18 points, surpassing his previous season high of 16 points.

The Fighting Irish clawed back over the first 11 minutes of the second half. During a five-point run, Ryan’s tough shot rolled in to tie the game at 53 and Wesley’s driving layup on the next Irish possession put them back in front.

Mulcahy responded with a 3-pointer, but Laszewski hit his own 14 seconds later. The Irish soon grabbed their largest lead of the game at 63-58 before Baker led Rutgers’ rally.