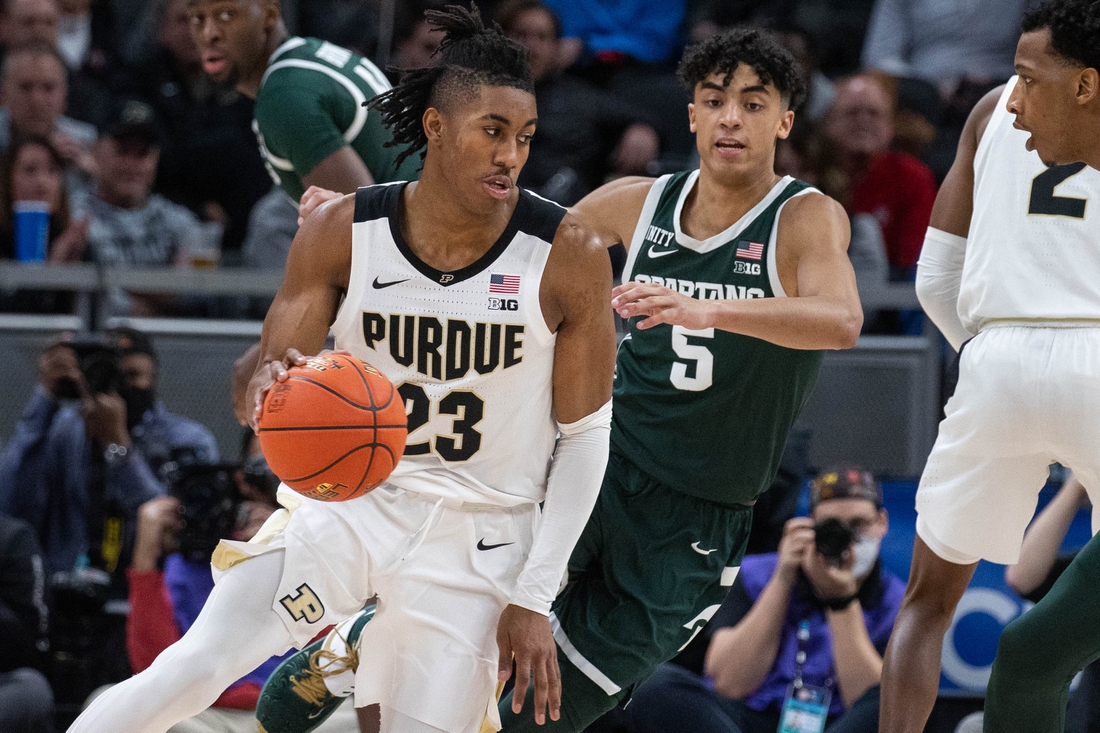 Ninth-ranked Purdue expects to see much more of Iowa’s Keegan Murray when the teams tangle in the Big Ten tournament championship game Sunday in Indianapolis.

Fifth-seeded and 24th-ranked Iowa (25-9) rallied to beat ninth-seeded Indiana 80-77 when Jordan Bohannon banked in a deep 3-pointer from the top with less than one second remaining. The Hawkeyes closed with a 19-9 run to advance to the title game for the first time since winning the tournament in 2006.

Purdue led Michigan State by 13 early in the second half, but the Spartans cut the lead to 57-56 with 5:45 remaining. Eric Hunter Jr. answered with consecutive 3-pointers to put Purdue up 63-56.

The Boilermakers beat Iowa twice during the regular season. Murray missed the first game with an ankle injury, and in the second, the sophomore forward sat out the final 11 minutes of the first half after picking up his second foul.

Murray, the Big Ten’s leading scorer, had 32 points on 11-of-17 shooting, including 8 of 10 from beyond the arc, and a team-high nine rebounds in the win over Indiana. Patrick McCaffery added 16 points and Bohannon 12, including three 3-pointers in the final 2:27.

“I remember about four minutes to go we’re down five and I just felt like in the huddle that these guys kept believing, and that’s what they had to do,” Iowa coach Fran McCaffery said. “We were right there, put ourselves in a position to be right there against a team that’s really good, playing really well. The star is playing well, but we continuously get great play off the bench from a lot of different people, and it’s an incredibly unselfish group, an incredibly fun team to coach.”

Murray, who had 26 points in each of the first two games, is the first player in Big Ten tournament history to record three consecutive 25-point games.

The Hawkeyes have hit 40 3-pointers in their three tournament games.

“They will go smaller and really put you in binds,” Painter said. “And that’s going to happen in this game. I don’t know how much it will happen, but it’s definitely going to happen. They spread you out. They have quickness, they have good size. They can play bigger, they can play smaller.”

Purdue topped Iowa 77-70 in the Big Ten opener in early December. The Boilermakers won the second meeting 83-73 in late January, shooting 61.2 percent from the field, including 13 of 22 from long range. Purdue’s Trevion Williams had 28 rebounds in the two games against Iowa, including 18 in the first.