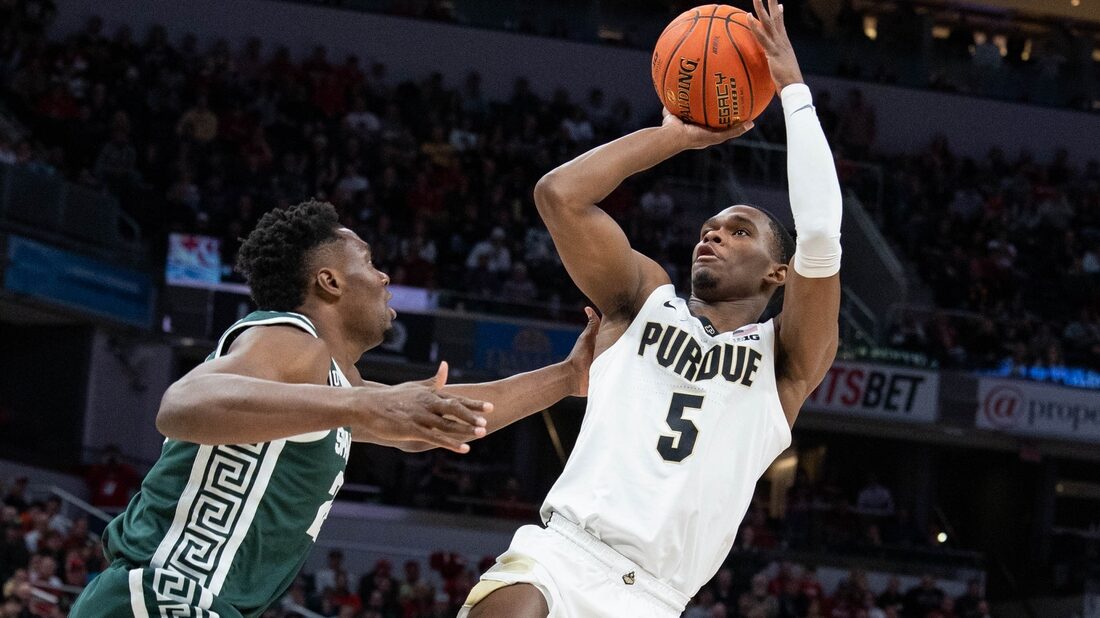 Jaden Ivey scored 17 of his 22 points in the second half to pace #9 Purdue to a 75-70 victory over seventh-seeded Michigan State in the semifinals of the Big Ten tournament Saturday at Indianapolis.

The third-seeded Boilermakers (27-6) advance to Sunday’s title game against fifth-seeded Iowa (25-9), which defeated Indiana 80-77 when Jordan Bohannon banked in a deep 3-pointer from the top with 1.1 seconds left.

Purdue last won the tournament in 2009, losing the final in 2016 and 2018. Iowa is appearing in the title game for the first time since winning it in 2006. The Boilermakers beat Iowa twice during the regular season

Michigan State, which trailed 43-30 early in the second half, pulled within 57-56 on A.J Hoggard’s jumper with 5:45 remaining. Eric Hunter Jr. answered with consecutive 3-pointers to put Purdue up 63-56.

Ivey’s spinning layin put the Boilermakers up 69-59 with 1:50 remaining.

Michigan State played most of the game without point guard Tyson Walker, who suffered an ankle injury just 2 1/2 minutes into the game.

Trevion Williams added 15 points for Purdue, and Zach Edey and Hunter each had 11. Edey had 10 rebounds as the Boilermakers had a 43-35 edge on the glass. Ivey had nine rebounds and five assists.

Purdue opened a double-digit lead with a 12-0 run, going in front 25-14 on Edey’s putback with just over five minutes left in the first half.

Marcus Bingham Jr., who had 19 points and 11 rebounds in the Spartans 69-63 quarterfinal victory over #12 Wisconsin, had nine points in the first half on 4-of-7 shooting. The rest of the Spartans were a combined 5 for 23.

Michigan State was just 1 of 12 from beyond the arc in the first half, while the Boilermakers had an 11-0 edge in second-chance points. The Spartans were 7 of 25 from long range for the game.