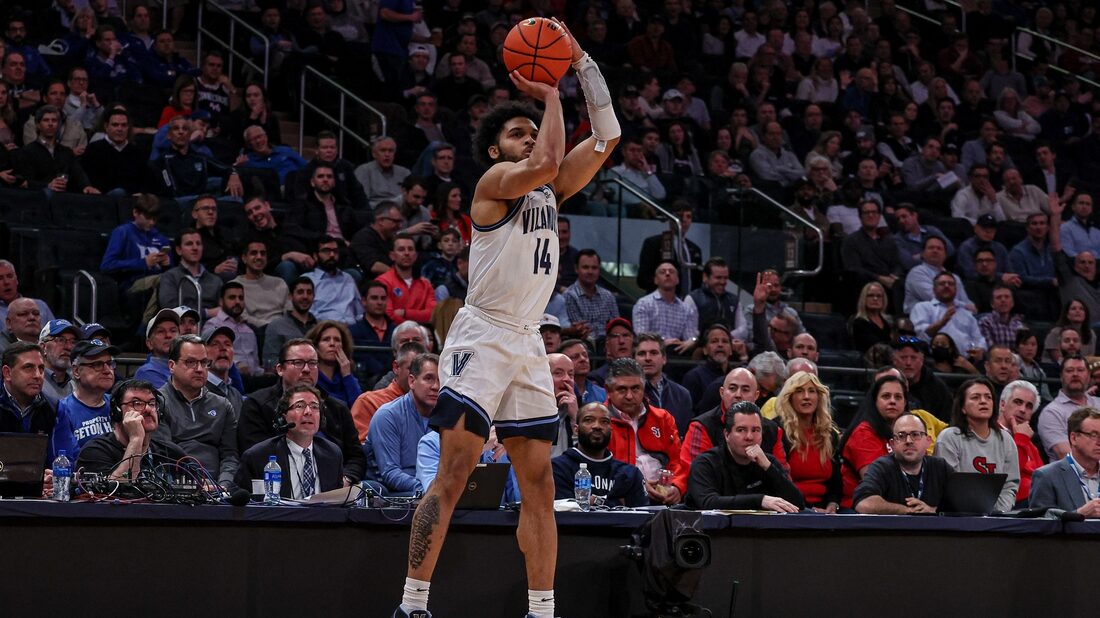 Despite some nagging injuries and ailments, second-seeded Villanova advanced to the semifinals of the Big East tournament with a gritty 66-65 win over seventh-seeded St. John’s on Thursday in New York.

Caleb Daniels moved into the starting lineup and led the way with 19 points because Jermaine Samuels was struggling with back spasms. Samuels, who was riding the stationary bike to stay loose, came through with seven points and eight rebounds. Eric Dixon also had four points and nine rebounds in 15 minutes despite feeling ill right before tip-off.

Justin Moore added 15 points and Collin Gillespie had 14 as the Wildcats rallied from a 17-point deficit.

“We work on free throws every day in practice,” said Brandon Slater, who dropped in the two game-winning free throws with 2.8 seconds remaining. “When I stepped to the line, my teammates and coaches were like, ‘Hey, we do this every day.’ “

The veteran-laden Wildcats never panicked when they trailed by 17 and struggled mightily on offense. They kept competing, and the result was another win and the ability to advance in this rugged tournament.

“This conference is as good as it’s ever been this year,” Villanova head coach Jay Wright said. “We just knew St. John’s was really good. We weren’t down. We weren’t disappointed with how we played at half down seven. We just got out of sync a little bit.”

But experience paid off in the end.

“We’ve got great seniors,” Wright said. “We have great upperclassmen.”

Connecticut is looking for its second victory this season against Villanova. It defeated the Wildcats 71-69 Feb. 22 in Hartford after falling 85-74 earlier in the season on the road.

When the Huskies have been efficient and successful, they’ve tightened defensively and executed by sharing the basketball on offense. That was certainly the case against the Pirates.

“The games we have failed in, we haven’t played the elite defense it takes to advance in March,” Connecticut head coach Dan Hurley said. “If we don’t play elite defense, the way this team is built, we won’t advance in either tournament.”

If Martin continues to perform like he did against Seton Hall, the Huskies will have a strong chance of advancing. Martin wasn’t selected for any of the all-Big East teams.

“Not everyone can make it. It’s a (heck) of a league,” Hurley said of Martin. “It’s hard to get on an all-conference team here. I think everyone knows how good a player Tyrese has been this year. I’d imagine a number of coaches felt like he was an all-conference level player.”
Connecticut has won seven of its last eight.