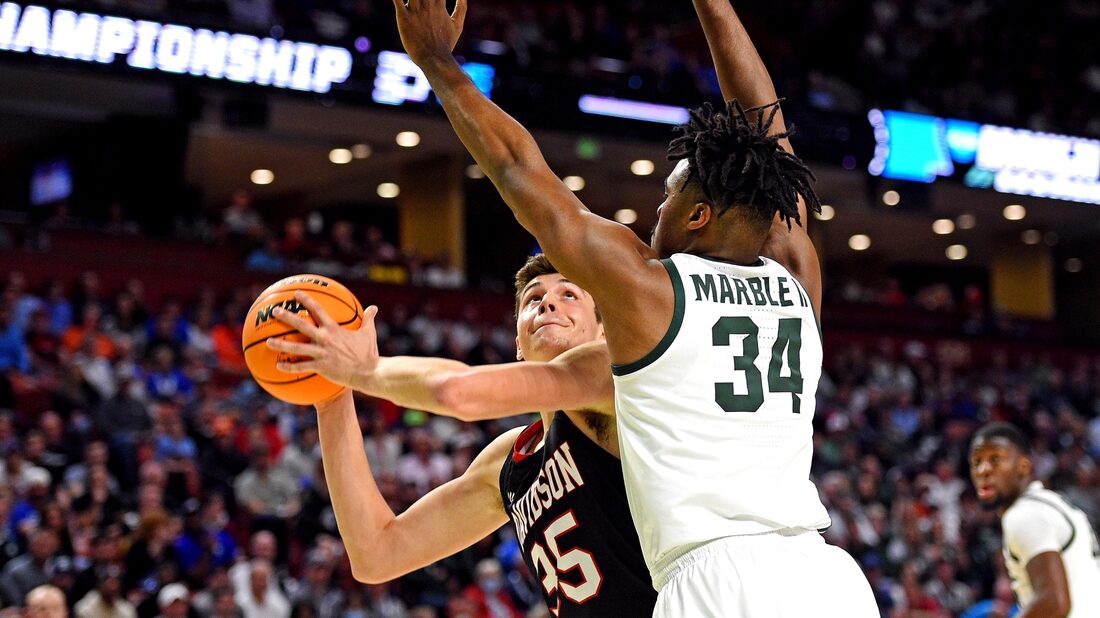 Joey Hauser tied his career high with 27 points and #7 seed Michigan State held off #10 seed Davidson 74-73 in the first round of the NCAA Tournament’s West Region at Greenville, S.C. on Friday.

Hauser, whose points were also a season high, added eight rebounds. A.J. Hoggard had 14 points and Gabe Brown contributed 12.
The Spartans (23-12) will face #2 seed Duke (29-6) in the second round on Sunday.

“It’s a new season. That’s the beauty of this, so I just felt good. It’s a fresh start for us,” Hauser said. “We had a good Big Ten (tournament) run and I was feeling good. The matchup wasn’t much different, we didn’t do anything different, I just made my shots.”

Neither team led by more than six points in the first half. Michigan State emerged with a 32-31 lead despite going scoreless in the last three minutes.
Hauser scored seven points in the first four minutes of the second half. Brajkovic matched that after battling foul trouble before halftime.

The Spartans had an 8-2 spurt to take a 49-45 lead. Michigan State then went scoreless for more than five minutes while Davidson scored seven points, including two Brajkovic baskets.

Hoggard ended the Spartans’ drought with a layup. The Wildcats had a four-point possession when Mennenga made a layup and Brajkovic converted a putback off a missed Mennenga free throw.
That gave Davidson a 56-51 lead. Michigan State responded with a 10-0 run that Hoggard began with a layup and completed with a jumper. In between, Hauser and Brown hit 3-pointers.

The Wildcats finally answered with a 3-pointer by Michael Jones, but Julius Marble’s three-point play with 3:01 left gave the Spartans a 64-59 lead. Neither team scored again until Hauser made two free throws with 1:15 lead.

Tyson Walker made two free throws to seal the Spartans’ victory. Lee hit a 3-pointer in the final second.