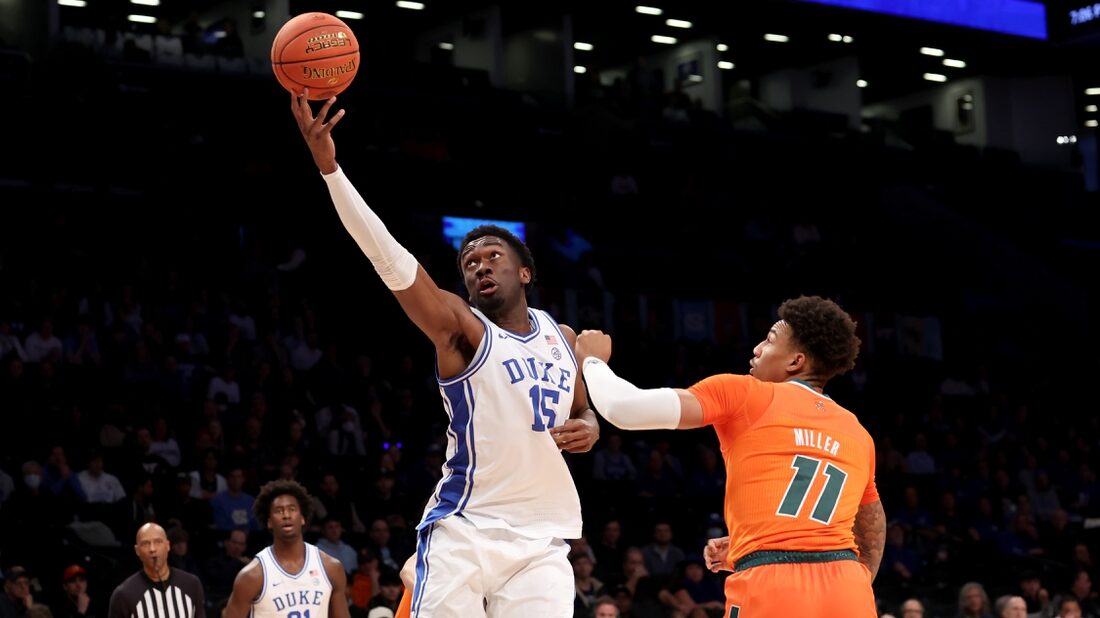 Propelled by the hot shooting of AJ Griffin and Paolo Banchero, #7 Duke survived a determined challenge from Miami in an 80-76 ACC tournament semifinal victory Friday night in New York.

Wendell Moore Jr. was clutch down the stretch, scoring eight of his 17 points in the final six minutes as top-seeded Duke (28-5) advanced to the ACC championship game on Saturday night. Their opponent will be the winner of Friday’s late game between Virginia Tech and North Carolina.

Banchero made 8 of 10 shots in delivering 18 points, 11 rebounds and four assists, while his freshman classmate Griffin scored 21 points on 7-of-12 shooting and grabbed seven rebounds.

In avenging a regular-season home loss to the Hurricanes, the Blue Devils shot 50 percent from the floor and won the battle of the boards 40-31.

Miami led by 11 points early in the game, but late in the first half Griffin scored 12 points in a span of less than five minutes as Duke forged a 36-36 tie at the break.

In the second half, back-to-back 3-pointers by Griffin and Wendell Moore Jr. earned the lead for Duke, 42-38.

The Blue Devils led by seven points midway through the second half, but the Hurricanes went on a 10-2 run, capped by a 3-pointer by McGusty to get the lead, 62-61, with 6:05 left. It remained tight until the end, although McGusty was called for traveling on a key possession with 47 seconds left.

Duke took control over the final minute as Wendell Moore Jr. made 4-of-4 free throws and Griffin dropped 3 of 4 from the line.

Miami got off to a hot start, making four 3-pointers in the first 6:04. Moore hit the first two and Anthony Walker made the fourth, giving the Hurricanes an 18-7 lead. But Banchero, who made his first five shots, answered as he scored nine points in a 15-4 run as Duke forged a 22-22 tie.