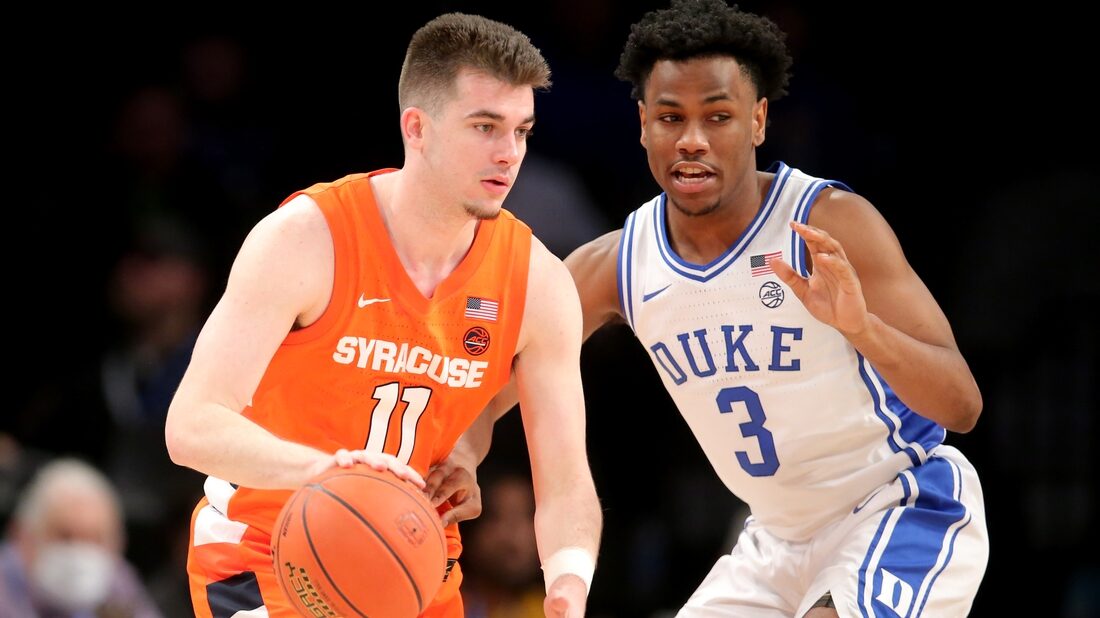 Wendell Moore Jr. scored 26 points and #7 Duke scored the final 10 points of the game to overcome short-handed Syracuse for an 88-79 victory in Thursday afternoon’s quarterfinal opener of the Atlantic Coast Conference tournament in New York.

Mark Williams added 15 points and 16 rebounds, Trevor Keels had 14 points and Paolo Banchero had 10 points and 10 rebounds for the top-seeded Blue Devils, who held the Orange without a point for the last three minutes, 30 seconds.

#9 seed Syracuse was without All-ACC guard Buddy Boeheim, the leading scorer in the conference in the regular season. He suspended for one game by the ACC for a “sportsmanship” violation — throwing a punch in Wednesday second-round romp past eighth-seeded Florida State.

Duke (27-5) takes on the Boston College-Miami winner Friday in the conference tournament semifinals.

Jimmy Boeheim poured in a season-high 28 points, Joe Girard scored 18 of his 23 points in the first half and Cole Swider notched 15 points for Syracuse (15-16). It’s the Orange’s first losing season since Jim Boeheim became head coach in 1976-77.

This marks the last ACC tournament for Duke coach Mike Krzyzewski, the all-time winningest coach in NCAA Division I history.

The Orange deviated from its normal 2-3 zone with some other alignments, appearing to put Duke out of rhythm.

Syracuse led for stretches of the second half, including by 79-78 with three minutes to play on Jimmy Boeheim’s bucket off a rebound. Moore then made a pair of free throws and Banchero scored for the Blue Devils.

The Orange missed its next four shots and committed a turnover, with Jeremy Roach hitting a 3 and Williams dunking as Duke reclaimed control.

Syracuse led by seven several times in the opening minutes of the second half. But Swider picked up his fourth foul with 15 minute to play.

Symir Torrence was in the starting lineup for the first time for the Orange.

Duke made four 3-point shots in the game’s first four minutes, building an 11-point lead. Yet Syracuse, despite a scoring drought of more than five minutes, led 40-36 at halftime as Girard had 18 points. Duke trailed at the half for just the third time this season.