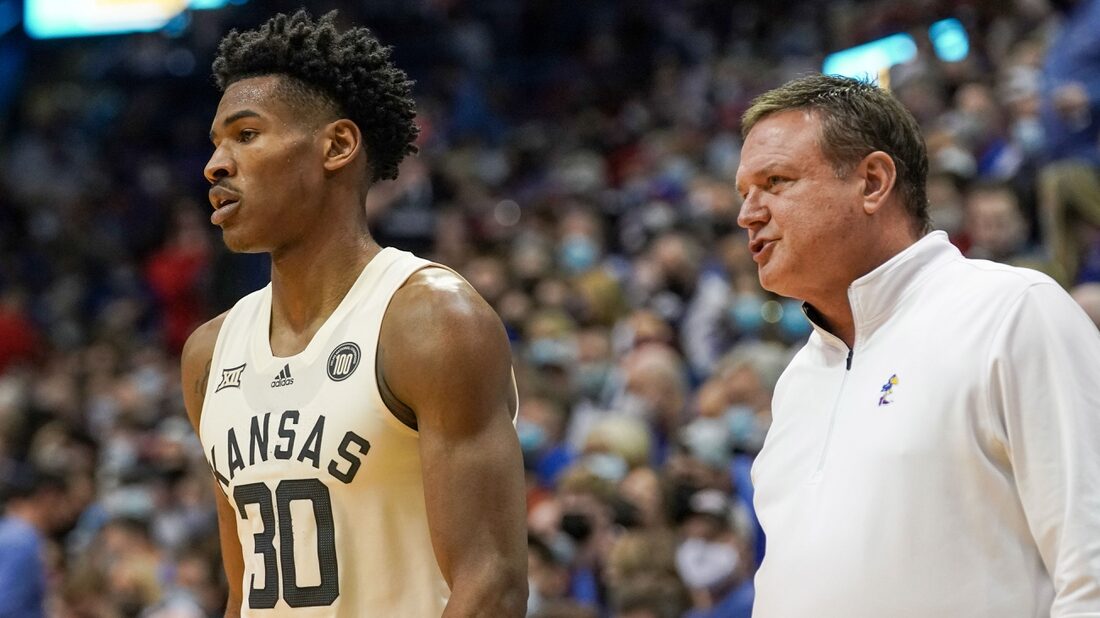 No Big 12 program knows better than Kansas what it&rsquor;s like to take the floor with a conference title on the line.

Kansas just played a stressful game Thursday in which hope for claiming a 20th Big 12 title in the 26-year existence of the conference hinged on the outcome. Although it trailed TCU for much of the half, Kansas eventually earned a 72-68 home win and tied Baylor atop the Big 12 standings.

“I tried not to say anything to the players,” Kansas coach Bill Self said, “but they probably felt it.”

Baylor, the reigning Big 12 and national champion, is also at home Saturday against Iowa State.

“Baylor&rsquor;s got to take care of business, but I anticipate they will,” Self said. “And we&rsquor;ve got to (win) to get a piece. Saturday will have a different type of fun pressure to it. I think (the TCU win) was more of a nervous pressure.”

Kansas could have easily fell for the second time in three days against TCU but instead halted a two-game losing streak that jeopardized a Big 12 title run in the first place.

Ochai Agbaji, the Big 12&rsquor;s leading scorer with a 20.2-point average, hit six of his first seven attempts to lead a fast start against TCU. He only hit two of 12 more shots but finished with 22 points and provided hustle plays the Jayhawks desperately needed.

“He played athletic, he played so hard, made his free throws, did so many good things. I&rsquor;m so impressed with him,” Self said of Agbaji, one of six Kansas seniors who will be honored Saturday.

Dajuan Harris, motivated by choice words Self aimed at him in practice, made key plays against TCU, including a block on the Frogs&rsquor; final possession when they trailed by three. Harris snapped out of a scoring funk by adding 11 points.

“We&rsquor;re a better team when people have to guard him,” Self said.

Texas tumbled 68-61 to Baylor on Monday. The Longhorns enjoy a three-game win streak against Kansas, including a 79-76 win on Feb. 7.

Texas made just 17.3% of its 23 attempts from 3-point range against Baylor, prompting coach Chris Beard to note that “people don&rsquor;t like to hear it but basketball is a game of making shots. It really is.”

Beard emphasized the need for the Longhorns to gain a foothold this month heading into postseason play, though Big 12 schedule makers did them no favors capping their league slate with games against Baylor and Kansas. The Jayhawks will become the eighth ranked opponent for the Longhorns in their last 11 games.

“We&rsquor;ve just got to turn the corner in March; that&rsquor;s always been our plan,” Beard said.

Christian Bishop is coming off his first double-double after posting 13 points and 11 rebounds against Baylor while adding three blocks.