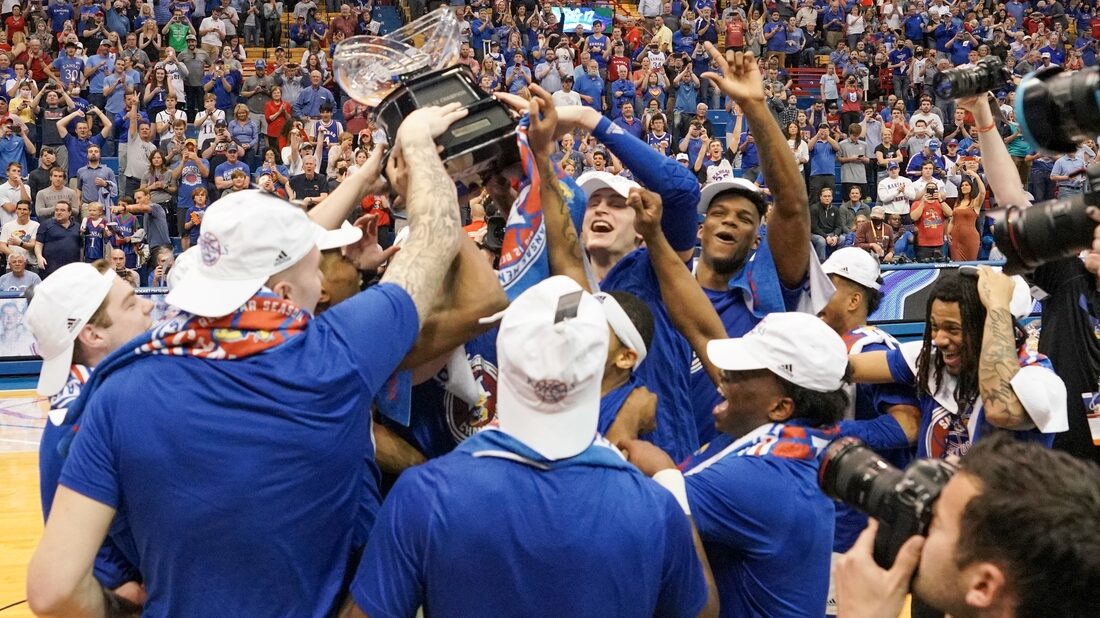 David McCormack scored the last of his game-high 22 points Saturday by converting a dunk with 39 seconds left in overtime as #6 Kansas edged #21 Texas 70-63 in Lawrence, Kan.

Playing their third game in five days, the Jayhawks (25-6, 14-4 Big 12) claimed at least a share of their 20th Big 12 championship in the 26-year history of the league while also obtaining an NCAA-record 63rd conference title overall.

In a tight game throughout, the Jayhawks gained a six-point lead with 5:19 remaining in the second half, but missed their last six shots from the field and turned the ball over twice as Texas tied the score.

Longhorn Courtney Ramey made one of two free throws to tie it with 51 seconds remaining. After a KU turnover, Ramey missed a jumper and the Jayhawks could not get off a shot in the final 15.8 seconds of regulation. A banked 3-pointer by Jalen Coleman-Lands went in after the buzzer, leaving the game tied 57-57.

Wooden Award finalist Ochai Agbaji struggled through his worst offensive performance of the season for the Jayhawks. He missed his first 10 shots before finally connecting with 2:39 left in overtime, tying the score at 61-61.

The Jayhawks took the lead on a pair of free throws by McCormack, and with a two-point lead in the final minute, McCormack scored on a fastbreak dunk to boost Kansas to the 67-63 advantage.

Agbaji sank two more free throws with 9 seconds left for the final margin. He finished 1-for-11, netting eight points – the only game this season he has not been in double figures.

Ramey countered with 14 points on 5-for-7 shooting for Texas, which grabbed an early 15-9 margin before Kansas got two 3-pointers from Braun late in the half to gain the lead.

Kansas honored six seniors playing their last home games and extended its string of Senior Day wins to 39, dating to 1984.