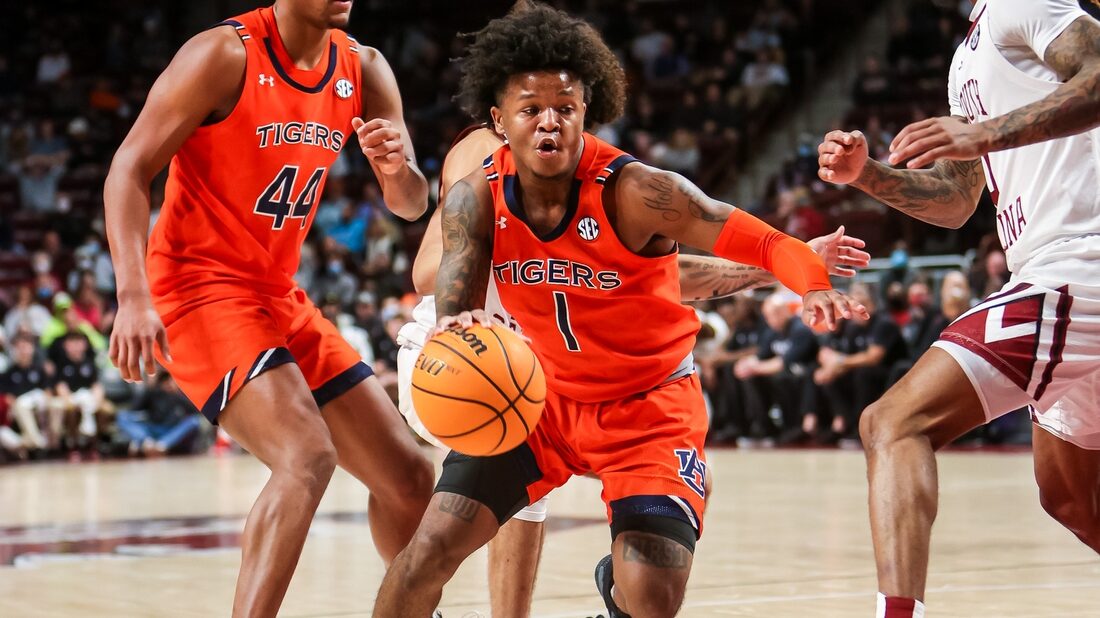 By rallying for an 81-68 overtime win Wednesday night at Mississippi State, #5 Auburn clinched at least a share of the Southeastern Conference regular-season title.

The Tigers (26-4, 14-3 SEC) would claim the championship all for themselves on Saturday if they beat visiting South Carolina.

“All the work we’ve put in has paid off,” Auburn star freshman Jabari Smith said. “We’re excited to see how much better we can get. Just keep playing and get better.”

Future opponents might cringe at the possibility that Smith is capable of improving. His 27 points on 13 field-goal attempts against the Bulldogs demonstrated his ability to carve up a defense when he takes proper shots.

As is, Smith leads the team in scoring at 16.9 points per game to go along with 6.9 rebounds per contest. The best thing is he gets plenty of help. K.D. Johnson, who supplied 12 of his 14 points in overtime at Mississippi State, contributes 12.6 ppg.

Wendell Green Jr. adds 12.1 ppg and five assists, although he has made just 16 of 63 shots (25.4 percent) over the past six games. Center Walker Kessler chips in 11.6 points, 8.2 rebounds and a Division I-best 4.6 blocked shots per game. Kessler grabbed 10 rebounds and swatted three shots despite a shoulder injury on Wednesday.

Auburn’s most impressive feature has been its defense. Thanks to Kessler, the Tigers lead Division I in blocked shots per game at 8.1. Mississippi State made just 40.3 percent of its field-goal attempts and went 0-for-13 from 3-point range.

That more than made up for getting dominated 50-32 on the boards and allowing 21 offensive rebounds.

“This is probably one of the best regular-season wins I’ve had in a long career, to win a championship on the road at a really good place against a really good team and a really good coach with our backs against the wall,” Tigers coach Bruce Pearl said.

South Carolina struggled to make shots, canning only 38.5 percent from the field and 6 of 20 from 3-point range, but was able to come up with 16 fast-break points and earn a 25-13 advantage in bench points.

“We couldn’t run any offense, but somehow, someway, we figured out a way to win the game,” Gamecocks coach Frank Martin said. “We came out in the second half, got into the open court, converted a couple of threes and got the lead.”

Auburn is gunning for a series sweep after toppling the Gamecocks 81-66 on Jan. 4 in Columbia, Mo., behind 22 points from Green. Stevenson scored a game-high 25 in defeat.