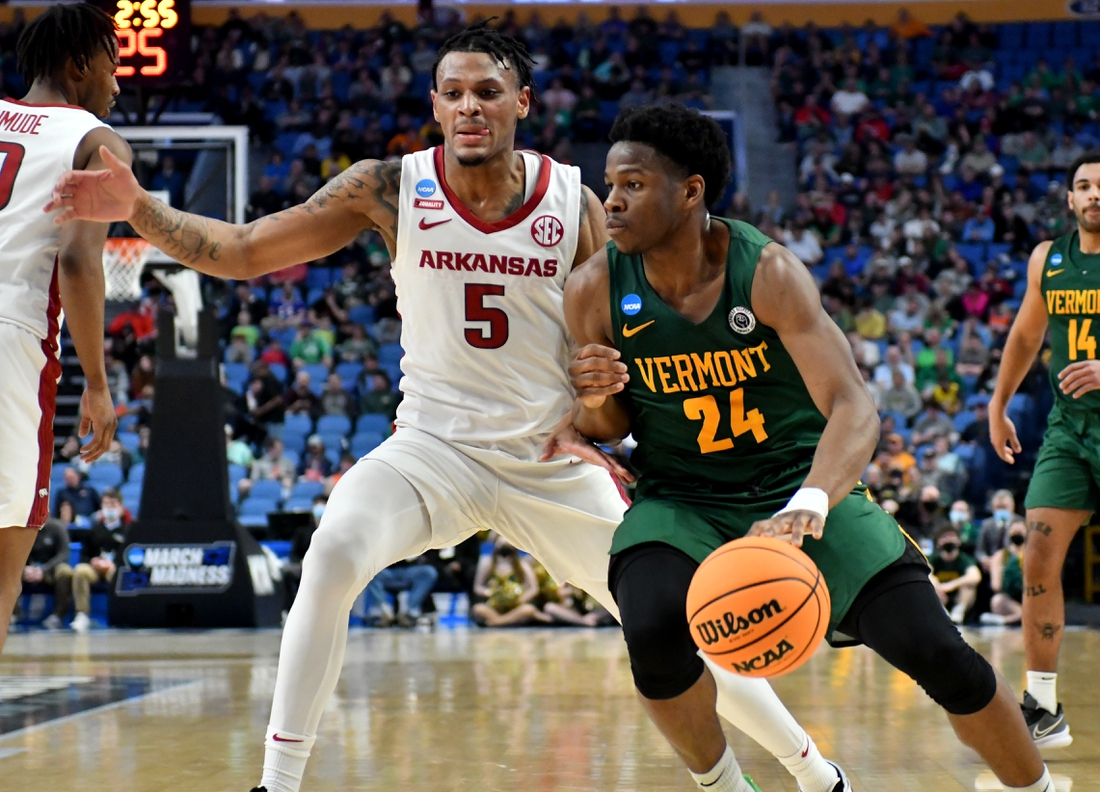 Stanley Umude scored 21 points and JD Notae added all 17 of his points in the second half as Arkansas withstood a late charge from Vermont for a 75-71 NCAA Tournament West Region victory Thursday night in Buffalo.

Davonte Davis added 14 points and Jaylin Williams delivered 13 points and 10 rebounds as fourth-seeded Arkansas (26-8) advanced to a Round of 32 game on Saturday against 12th-seeded New Mexico State (27-6), which upset fifth-seeded UConn.

Ben Shungu and Ryan Davis led 13th-seeded Vermont (28-6) with 20 points each. However, Williams had much to do with holding Davis scoreless over the final 13 minutes.

“We just had great respect for Vermont,” Arkansas coach Eric Musselman said. “Coming into the game, we knew it was gonna come down to the last couple minutes. I’m just happy we survived, and that’s all it’s about.”

Arkansas led 67-58 with just over four minutes left, but Shungu led a late rally, scoring seven points in the final stretch. A Shungu 3-pointer with 12 seconds left cut the deficit to 73-71. However, Notae followed with two free throws with nine seconds left to sew up in the win.

Vermont got off to a quick start. In the first six minutes, Ryan Davis made a pair of 3-pointers and Shungu added five points as the Catamounts bolted to a 13-8 lead.

For the rest of the half, though, Arkansas effectively contained Vermont’s top two threats, holding them to a combined one field goal.

Midway through the first half, Arkansas scored nine straight points. Davonte Davis started the burst with a fastbreak three-point play and Umude finished it with a dominant sequence. Umude energized the Razorbacks with an electrifying blocked shot then followed it with consecutive buckets inside for a 22-17 lead.

Arkansas finished the half with seven straight points, including a 3-pointer by Umude, to take its biggest lead to that point, 34-27.

Early in the second half, Vermont erased a nine-point deficit with a 12-point run. Ryan Davis fueled it with two 3-pointers and a spinning jump hook.

Two free throws by Umude with 9:34 left gave Arkansas the lead for good, 52-51. Umude hit a key 3-pointer, and Davonte Davis, Au’Diese Toney and Notae added buckets as the Razorbacks grabbed a nine-point lead with 4:25 to go.