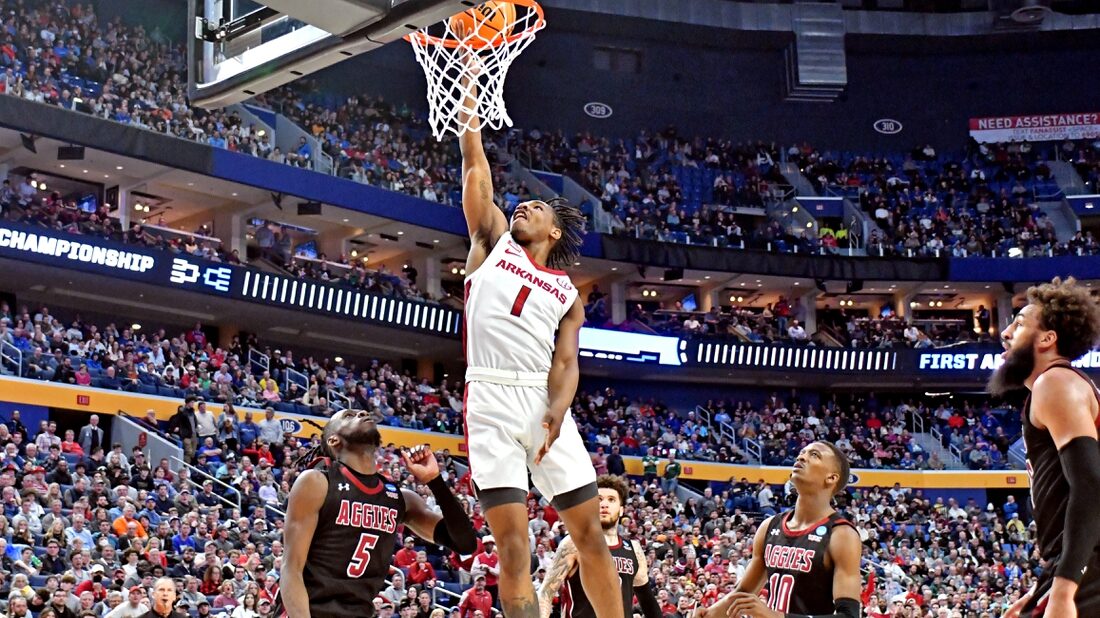 Jaylin Williams had 10 points and 15 rebounds for the Razorbacks (27-8), who overcame shooting just 27.5 percent from the floor — and 18.8 percent from 3-point range — to advance to the Sweet 16 for the second straight year. They’ll await the winner of Saturday night’s contest putting ninth-seeded Memphis against top-seeded Gonzaga.

“We spent the last 48 hours only talking about defense,” Arkansas coach Eric Musselman said. “I thought it was a defensive clinic but I’m not sure if I’ll have a job tomorrow because of our offense.”

Johnny McCants recorded 16 points and 12 rebounds for the Aggies (27-7), whose 8-to-19 assist-to-turnover ratio foiled them in their bid to advance to the Sweet 16 for the first time since 1992.

Teddy Allen was limited to 12 points on 5-for-16 shooting after erupting for 37 points in New Mexico State’s 70-63 win over UConn on Thursday.

“I thought we did a great job on Allen,” Musselman said. “All of our guys read about him (and) saw what he did (vs. UConn).”

Allen wasn’t alone in his struggles, as the Aggies shot just 34.0 percent from the floor and 23.1 percent from 3-point range.

Notae was whistled for a charge to foul out as the Razorbacks held a 46-40 lead with 1:22 remaining in the second half.

Sir’Jabari Rice sank a 3-pointer with 11 seconds left that brought the Aggies to within two before Chris Lykes sealed the win at the foul line.

New Mexico State overcame a porous first half to score 16 of the first 22 points in the second to claim a 33-32 advantage with 8:06 to play. McCants scored 10 points in that stretch, capped by a three-point play that gave the Aggies their first lead since 9-7 midway into the first half.

That surge appeared to awaken Arkansas. Jaylin Williams and Notae each made a pair of free throws, Stanley Umude drained a 3-pointer and Au’Diese Toney powered home an emphatic dunk to give the Razorbacks a 41-33 lead with 6:07 to play.

The Aggies were clinging to a 9-7 lead with 9:21 to play in the first half before Umude fed Williams for an easy dunk to ignite the Razorbacks’ 19-6 run. Williams’ touchdown pass to Notae highlighted the surge before Clayton Henry’s four-point play trimmed Arkansas’ lead to 26-17 at halftime.