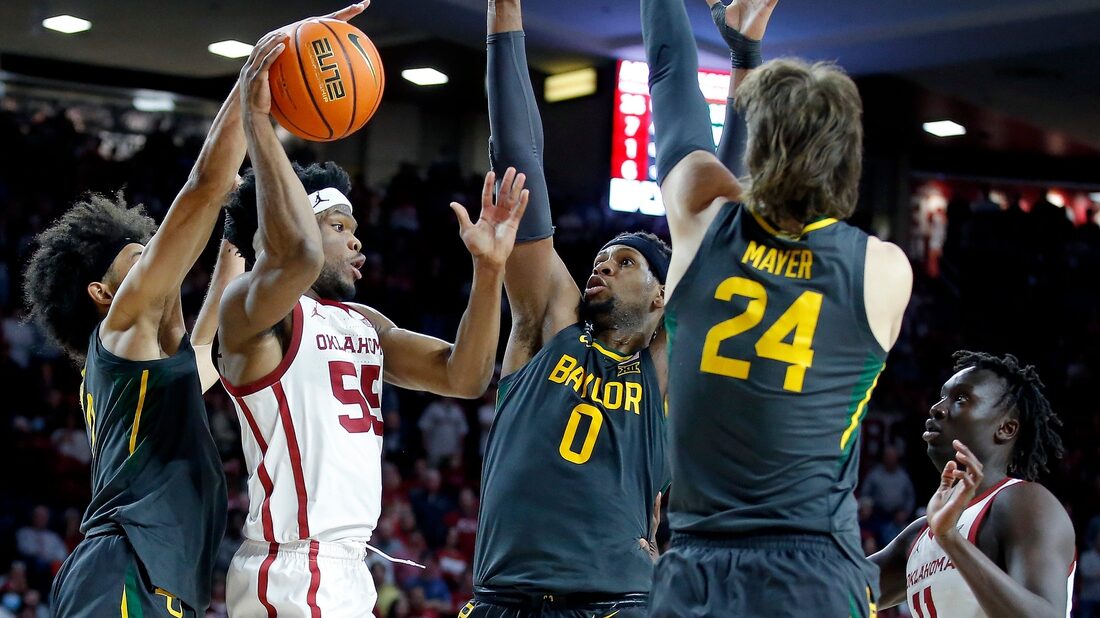 One year after winning the program’s first men’s basketball title, #3 Baylor will set its sights on its first Big 12 tournament championship.

The Bears enter Thursday’s tournament opener against Oklahoma at Kansas City, Mo., as the #2 seed after sharing the regular-season conference title with Kansas.

Baylor (26-5) enters on a five-game winning streak that included wins over a pair of ranked teams, Kansas and Texas.

“I feel really good about this team,” Baylor guard James Akinjo said. “I feel we’re playing some of our best basketball right now. We can still get a lot better, but we’ve just got to keep going.”

The Bears’ offensive balance has been evident in the meetings, as six different players scored in double figures, with only Adam Flagler scoring at least 10 in each game. Flagler (13.8 points), LJ Cryer (13.5) and Akinjo (13.3) lead the team in scoring, while Flagler averaged 19 points per game against Oklahoma.

The last time they met, the Bears forced the Sooners into a season-high 25 turnovers, yet Baylor knows it has not completely locked down the winning formula.

“They’re probably the best cutting team we’ve played,” Flagler said. “They love to get into the paint. We just packed it in and had each other’s back, and just made sure we communicated out there. We knew we could cause turnovers and get out in runs.”

Oklahoma enters on a three-game winning streak, including Saturday’s 78-71 win at Kansas State.

“I feel we are,” Sooners coach Porter Moser said when asked if the Sooners were playing their best entering the tournament. “We’re getting contributions from more guys than we’ve ever had.”

The victory at Kansas State earned the Sooners the #7 seed in the tournament and let them avoid playing in a first-round game Wednesday.

“We needed it,” Moser said of the extra day of preparation.

“With Thamba, he’s so big. He rolls and catches it on the block, catch lobs, he can post up and make those moves,” Moser said. “Then you have Sochan who will pop, he’ll drive you and he’ll shoot it. He’s a terrific player.”

The only question surrounding Baylor and the NCAA Tournament is whether the Bears will earn a #1 seed. The Sooners do not appear to have a resume worthy of an at-large berth, but Moser believes his team should be considered for inclusion regardless of its result in the tournament.

“I think we’ve got a really good case for a lot of reasons,” Moser said. “I’ll sound off on that later. I really want all our focus about Baylor right now.”

The winner of Thursday’s game will take on the Texas Tech-Iowa State winner Friday.