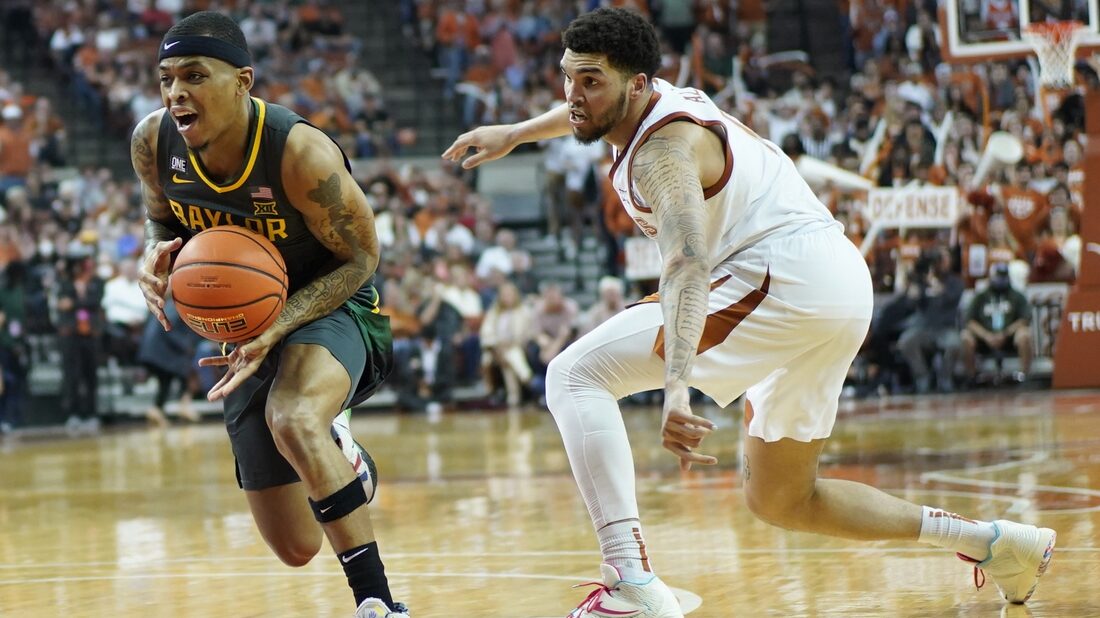 #3 Baylor will know by the time it takes the floor on Saturday against Iowa State in Waco, Texas, whether it’s got a chance at winning the Big 12 regular-season crown.

The Bears need to win and hope for a loss by Kansas in at least one of its two remaining games (Thursday vs. TCU, Saturday vs. #21 Texas, both at home) to win the conference crown. It’s possible the Bears could drop to third place, too, behind Kansas and Texas Tech.

The one thing Baylor (25-5, 13-4 Big 12) knows for sure: No matter how the regular season ends, there’s a spot with the Bears’ name on it in the NCAA Tournament, where they will defend their national championship.

The Bears have regained their momentum after injuries knocked them off track. They have won six of seven after a 68-61 road win at Texas on Monday. The Bears got 19 points apiece from Adam Flagler and James Akinjo, while Kendall Brown added 13 points and Flo Thamba hit for 12 in the win.

“We were undefeated, 15-0, when we had everybody. Then we had a plethora of injuries,” Baylor coach Scott Drew said after Texas game. “The team stuck together and gave us time together as a staff to be successful. Shows a lot of leadership and courage from them.”

Akinjo hit a floater in the lane and a pair of free throws to cap a late 9-0 run for Baylor that broke a 54-54 tie, then sealed the game with two free throws with a minute left.

Drew said he sleeps well at night knowing Akinjo and Flagler can run the show.

“Some games they make shots, some they miss,” Drew said. “And you feel confident with them leading you.”

The Cyclones (20-10, 7-10) head to Waco after a 53-36 loss at home to Oklahoma State on Wednesday. Izaiah Brockington scored 13 points to lead Iowa State while Tyrese Hunter added 12. The Cyclones trailed 22-20 at the half but let the game get away when they managed just 16 points in the second half on 7-of-25 shooting.

“We were definitely out of character tonight,” Iowa State head coach T.J. Otzelberger said. “Didn’t have the chip on our shoulder we need to have. Didn’t play with the toughness, the physical effort, the want to, that we’ve developed our identity around, and we’re not a good enough team to just show up and think that teams are just gonna let us get the victory.”

“We need to be more stubborn to stay the course in everything we do, so that our offense will come around,” Otzelberger added. “It wasn’t our offense as much as how our offense impacted our psyche.”

The loss snapped a four-game winning streak for the Cyclones. The 36 points was Iowa State’s lowest total in the 50-year history of Hilton Coliseum and was the first time the Cyclones scored 36 points or fewer since producing just 32 against Colorado in 1948.