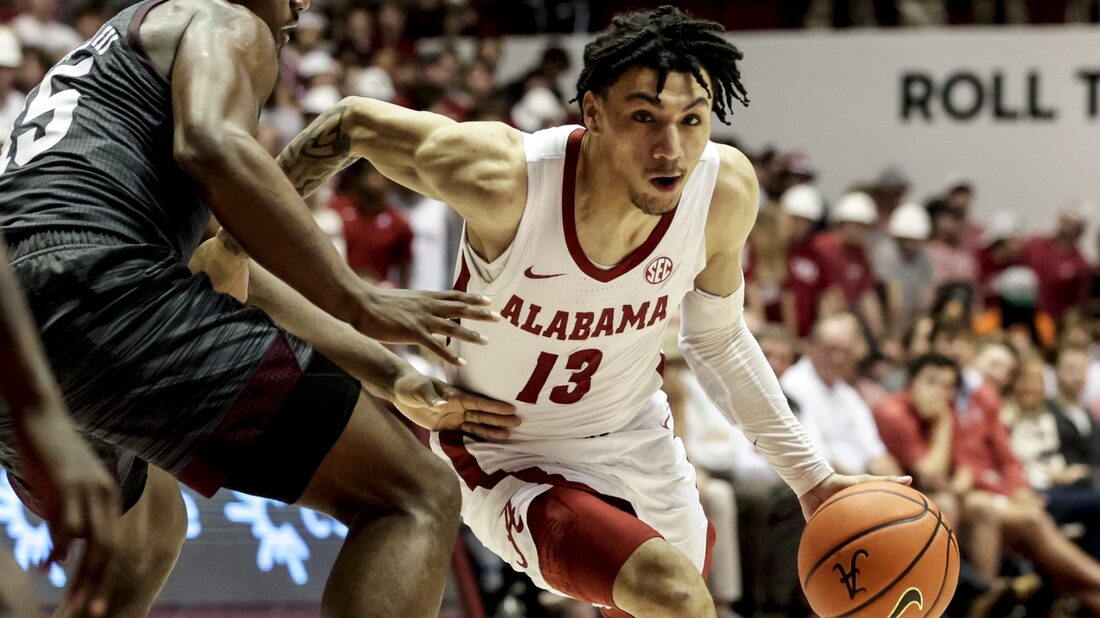 Alabama and LSU both could be headed to the NCAA Tournament, and the Southeastern Conference rivals will look to establish consistency on Saturday when they meet in the regular-season finale in Baton Rouge, La.

The #25 Crimson Tide (19-11, 9-8 SEC) are coming off an uninspired 87-71 home loss to Texas A&M on Wednesday night. Alabama is tied with Florida and South Carolina for fifth place in the SEC.

LSU (20-10, 8-9) is tied with Texas A&M and Mississippi State for eighth place in the conference.

Alabama coach Nate Oats said his team’s most recent effort wasn’t equal to what is necessary to succeed in March.

“The end is going to come quick if this is the effort we’re going to get,” Oats said. “We’re as good as our effort.”

The Crimson Tide had won two games in a row and five of six overall prior to Wednesday night’s setback.

“They didn’t say anything tonight,” Oats said of his players following the loss to the Aggies. “I think they’re embarrassed too. I’m embarrassed.”

Texas A&M scored the final three points of the first half and the first eight of the second on its way to taking over the game.

“Our defense was a disaster in the second half,” Oats said.

The Crimson Tide’s 19 turnovers resulted in 28 points for the Texas A&M. They had a season-low 24 rebounds, got outrebounded by nine and outscored in second-chance points, 13-2. It was the seventh SEC game this season in which Alabama allowed more than 80 points.

“We didn’t do a good job with any of the stuff we tried to stress,” Oats said.

Unlike Oats, LSU coach Will Wade had fewer problems with his team’s effort in its most recent game, but the Tigers let a late lead slip away in a 77-76 loss at #14 Arkansas on Wednesday night. They were outscored 21-13 in the final 6:31 of the game.

“I thought our effort was tremendous,” Wade said. “I thought we played extremely hard. We’ve just got to play smarter. We can’t make the mistakes we made in the six-minute game.”

LSU secured a 76-74 lead on a basket by Xavier Pinson with 53 seconds left, but it didn’t score again.

Mwani Wilkinson fouled Kamani Johnson, who made one of two free throws to cut the advantage to one point. Eric Gaines missed a jumper for LSU and the Tigers fouled JD Notae, who made both free throws. Pinson misfired on an attempted layup with four seconds left to effectively end the contest.

“You can’t make the mistakes that we made defensively down the stretch,” Wade said. “You just can’t do that if you’re going to win big games in tough environments.”

Tari Eason scored 24 points off the bench despite playing just 18 minutes because of foul trouble. He fouled out with 1:35 left.