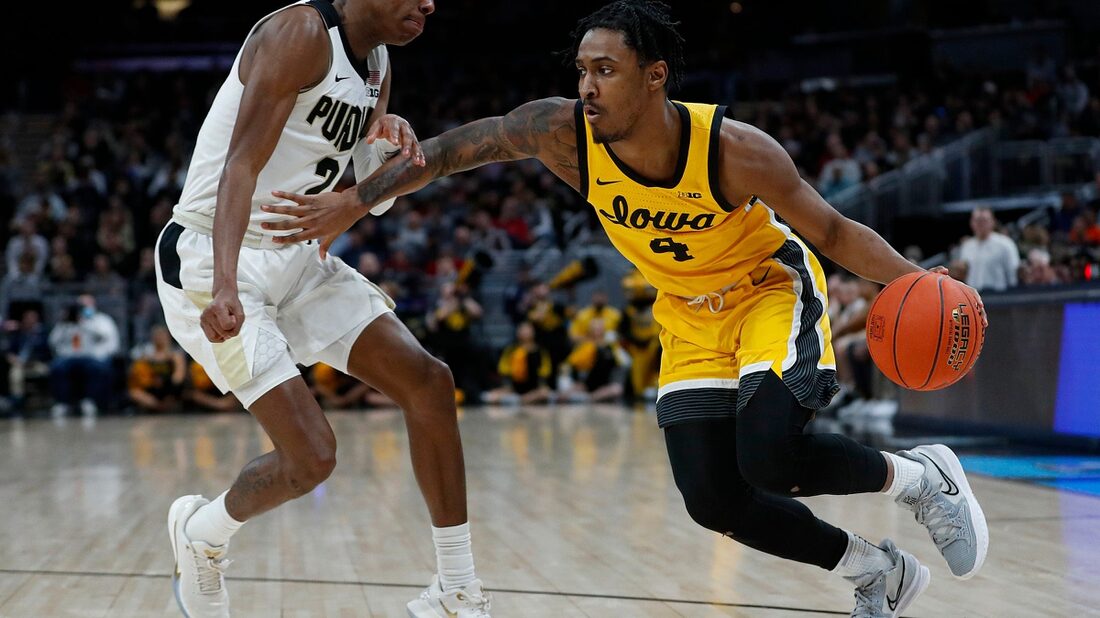 Keegan Murray scored 19 points with 11 rebounds and Tony Perkins added 11 points to lead #24 Iowa to a 75-66 victory over ninth-ranked Purdue in the Big Ten tournament championship game Sunday at Indianapolis.

The fifth-seeded Hawkeyes (26-9) avenged a pair of regular-season losses to Purdue to win the conference tournament for the first time since 2006. The third-seeded Boilermakers (27-7), whose last tournament title was 2009, lost in the final for the third time in six seasons.

Murray hit two free throws to put the Hawkeyes in front 63-55 with 4:15 remaining, but the Boilermakers answered with seven consecutive points, pulling withing 63-62 on 3-pointer from the top by Eric Hunter Jr. with 3:13 left.

Iowa’s Connor McCaffrey countered with a three-point play and Filip Rebraca hit the first of two free throws to put the Hawkeyes up 67-62 with 2:13 remaining. Perkins hit three of four free throws for Iowa to make it 70-62 with 1:02 left.

Payton Sandfort loomed large for the Hawkeyes midway through the second half when he snapped a 51-all tie with consecutive 3-pointers to put Iowa up with 8:25 remaining. Sandfort finished with 10 points on 4-of-4 shooting (2 of 2 from 3-point range).

The Boilermakers had a 48-30 rebounding advantage, including 17-10 on the offensive glass, but had only a 14-9 advantage in second-chance points.

Purdue hit its final three shots of the first half to pull within 35-32 at the break.

The Boilermakers negated their 27-15 rebound advantage in the first half by committing nine turnovers, leading to six Iowa points. Purdue also missed four free throws, including the front end of two bonuses.

The Boilermakers beat Iowa twice during the regular season, 83-73 on the road Jan. 27 and 77-70 last Sunday. Murray missed the first game with an ankle injury and was hampered by foul trouble in the second.