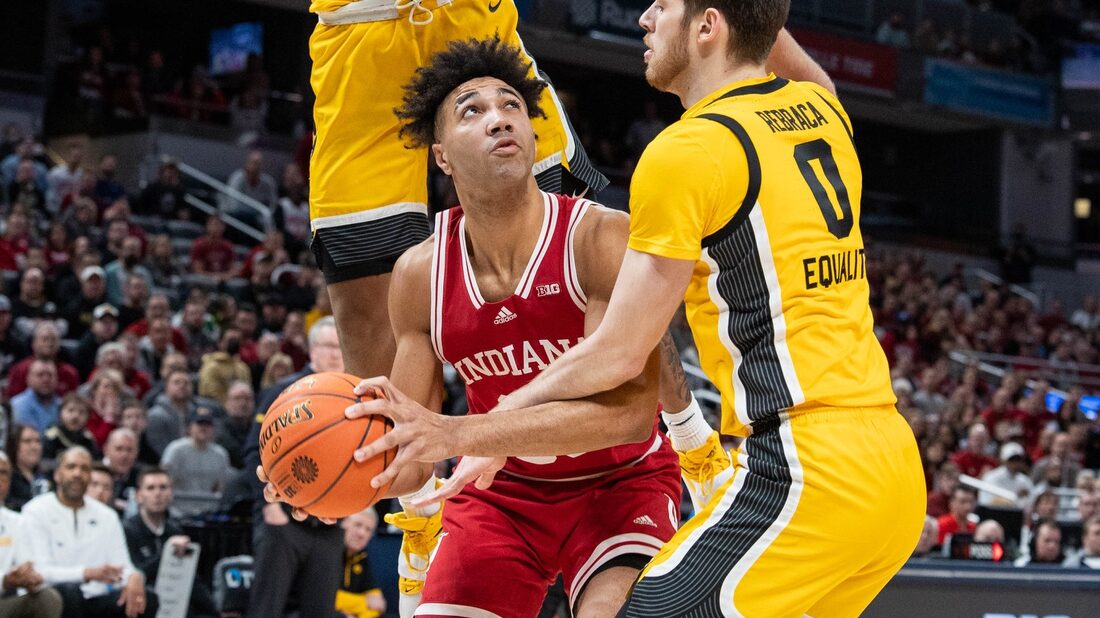 Jordan Bohannon banked in a go-ahead 3-pointer with 1.1 seconds left and Keegan Murray scored a game-high 32 points as #24 Iowa rallied to an 80-77 win over Indiana on Saturday in a Big Ten tournament semifinal in Indianapolis.

Fifth-seeded Iowa (25-9) advanced to meet the winner of Saturday&rsquor;s semifinal between Michigan State and Purdue in the tournament championship game on Sunday afternoon.

Trayce Jackson-Davis notched a double-double of 31 points and 10 rebounds for the ninth-seeded Hoosiers. Xavier Johnson added 20 points and nine assists for Indiana (20-13), and Race Thompson had 11 points and seven rebounds.

Patrick McCaffery (16 points) and Bohannon (12) also finished in double figures for the Hawkeyes, with Bohannon reaching that plateau behind a late flurry. Before the final three minutes of the game, he was 1-for-7 with three points. Bohannon then drilled a trio of 3-pointers down the stretch, including the game-winner.

A 9-0 Hawkeyes run put Iowa ahead 74-71 with 1:53 remaining. Prior to that, the Hawkeyes had cut the deficit to one on three occasions in the second half, but were ultimately unable to wrest control away from the Hoosiers.

After McCaffery slashed the deficit to four on a three-point play with 6:11 remaining, Indiana erupted for five points in the next 40 seconds to create breathing room again.

Jackson Davis finished 15-for-21 from the floor, helping Indiana to a 47.6 percent effort from the field.

Jackson-Davis boosted Indiana to a 38-32 advantage at the break, scoring 16 points on 8-for-11 shooting. The Hoosiers in the first half boasted a 26-12 advantage in points in the paint.

Indiana scored 15 of the game&rsquor;s first 18 points before Iowa responded with a 14-2 run to tie the game at 17 apiece with 8:42 remaining before halftime.