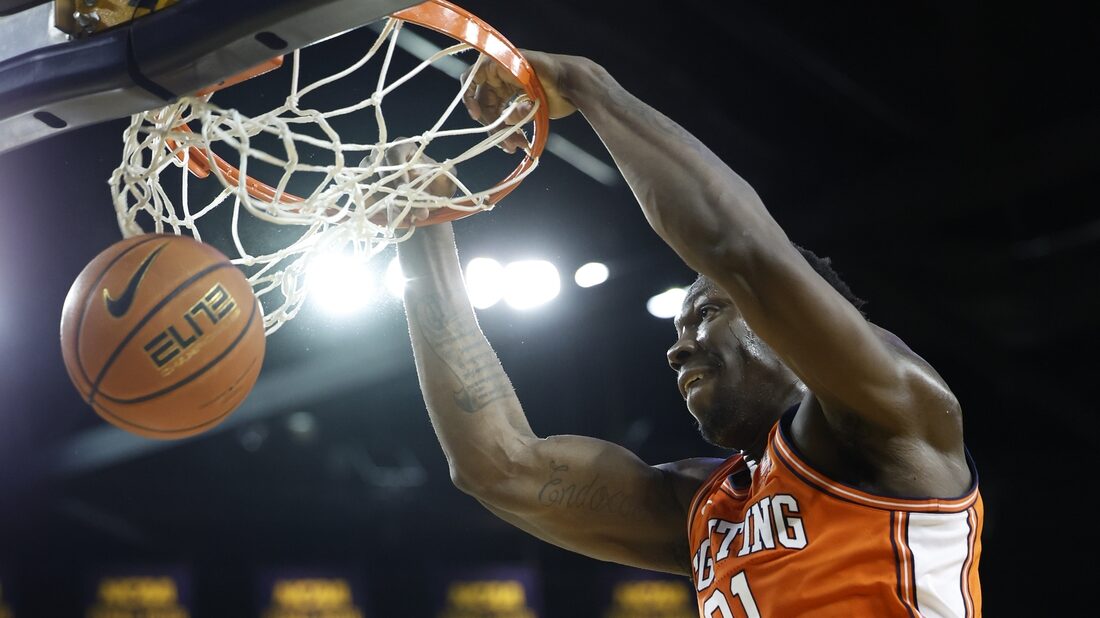 The win paired with #10 Wisconsin’s stunning loss Sunday against Nebraska, which entered the day dead last in the conference at 3-16, earns Illinois a double-bye to start next week’s postseason tourney. Illinois will next play Thursday against the winner of #8-seeded Michigan and #9 Indiana, who will face off Tuesday.

Alfonso Plummer added 15 points for the Fighting Illini (22-8, 15-5) and Andre Curbelo came off the bench to tally 14 points and six assists before fouling out late in the game.

Iowa had a chance to win the game after Da’Monte Williams hit just 1 of 2 free throws with 10.6 seconds left. But Kris Murray’s corner 3-pointer banged off the front rim and Trent Frazier emerged with the rebound just before time expired and Fighting Illini students stormed the floor.

The Hawkeyes hit just 34.5 percent from the field in the second half, but could have overcome that with normal foul shooting. However, a team that entered the night converting 75.7 percent at the stripe was a miserable 10 of 22. Perkins and Kris Murray made a combined 4 of 14.

The pregame storyline concerned Nebraska’s shocking 74-73 upset win at Wisconsin, giving Illinois a chance to share the regular-season title with the Badgers and emerge with the top seed for the conference tournament based on the teams’ only meeting — an Illini win on Feb. 2.

But Iowa, which was gunning to secure a double bye at the Big Ten tourney, wasn’t interested in Illinois’ potential feats. It rattled off 13 straight points in less than three minutes for a 32-19 advantage on Perkins’ layup at the 6:09 mark.

The Hawkeyes expanded the margin to 43-28 when Perkins connected on a 3-pointer with 3:12 remaining, but the Illini ended the half with the run they needed. Plummer drove for a layup with four seconds left, slicing Iowa’s lead to 43-37 at intermission.