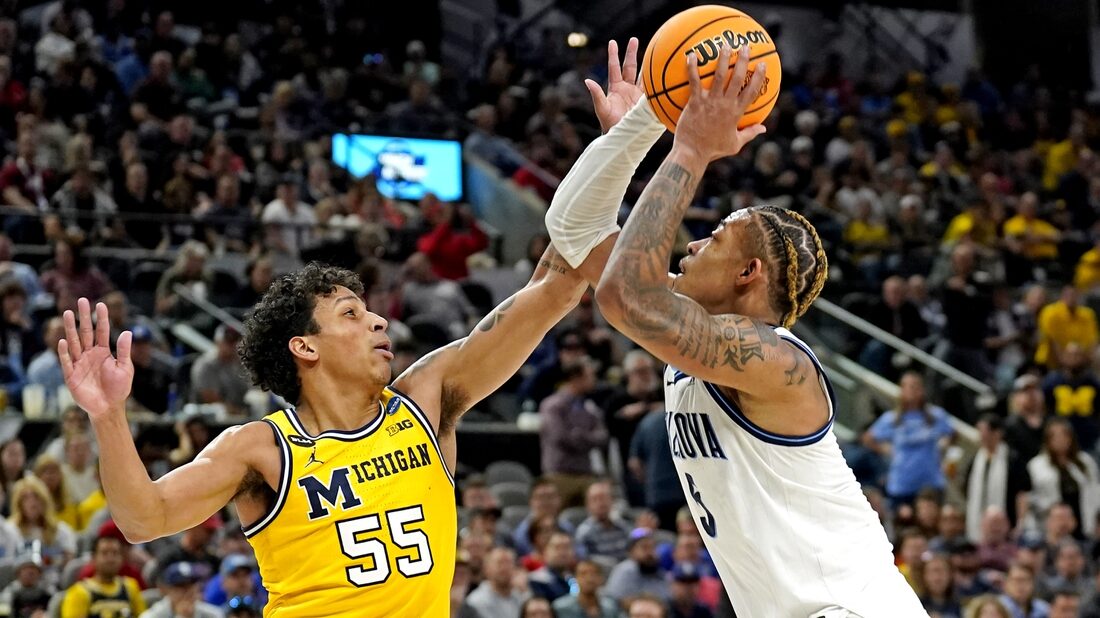 The Wildcats (29-7) move on to play the winner of the second South Region semifinal between #5 Houston and top-seeded Arizona.

Villanova carried a three-point lead to halftime and never allowed the Wolverines to see the lead in the second half. Michigan pulled to within 54-50 on two free throws by Terrance Williams II with 3:19 remaining but the Wildcats responded with a layup by Samuels and a 3-pointer by Collin Gillespie and held on for its eighth straight win and its 22nd win in its past 25 games.

Justin Moore added 15 points for Villanova and Gillespie hit for 12, all coming via four 3-pointers.

Hunter Dickinson led Michigan with 15 points and 15 rebounds while Eli Brooks scored 14 for the Wolverines (19-15).

Thursday’s game was a rematch of the 2018 NCAA championship game between the two teams, also won by the Wildcats.

The teams played an extremely clean first half, with only eight combined fouls and seven total turnovers over the first 20 minutes. The Wildcats led by as many as seven points, using a 10-2 run to build am 18-11 advantage after Moore’s pull-up triple at the 10:30 mark.

Michigan trailed 20-15 before reeling off a seven-point run, leapfrogging to the lead at 22-20 with 3:58 to play in the half via five straight points by DeVante’ Jones.

Samuels put Villanova back in front with a three-point play with 3:42 remaining in the half. The Wildcats extend their advantage to 28-23 on another bucket by Samuels and eventually took a 31-28 lead into the break.

Samuels led all scorers in the half with 11 points while Moore had 10 for the Wildcats. Dickinson paced Michigan with eight points. The Wolverines outshot Villanova 44.4 percent to 37.9 percent and made one more field goal but converted just 1 of 6 free throws before halftime.

The Wolverines were within three points after a free throw by Moussa Diabate with 17:15 to play but Villanova never let them get closer, stretching its advantage to 54-45 on a layup by Eric Dixon with 5:17 left.