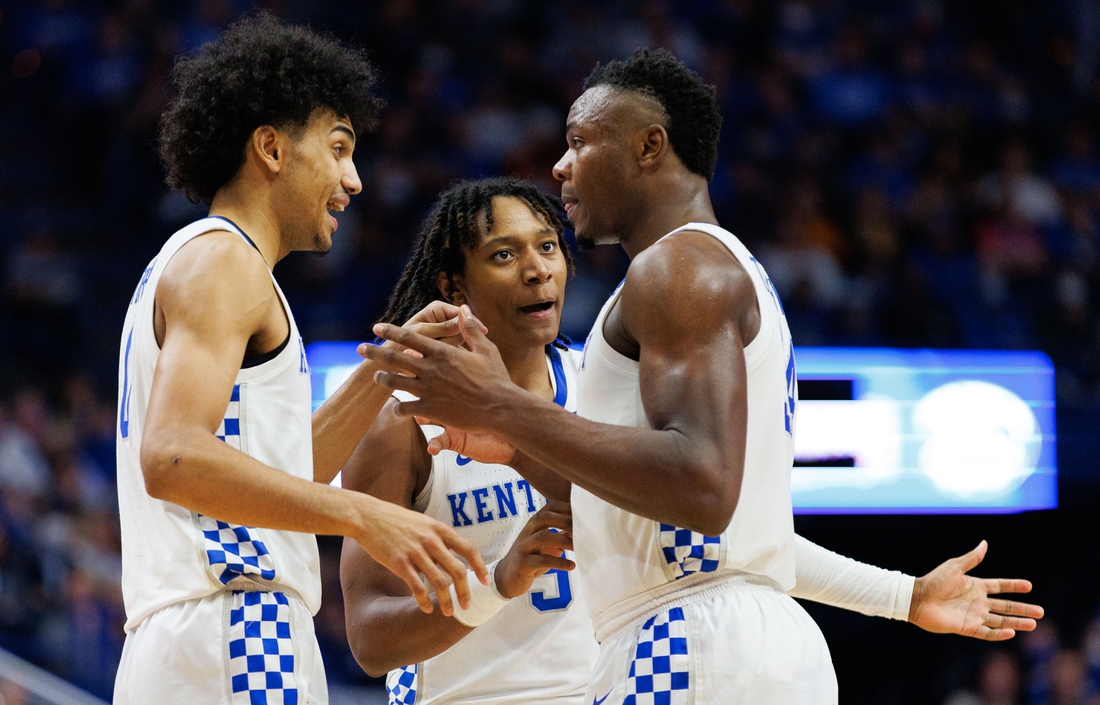 Oscar Tshiebwe landed on the All-America team announced Tuesday, but Kentucky coach John Calipari is asking the Wildcats to check their credentials at the door as the 2022 NCAA Tournament begins on Thursday.

“My thing is, right now, you’ve got to get your roles back and understand you’ve got to play for your teammates,” said Calipari. “And having more fun than anyone in the tournament.”

Kentucky is a 17.5-point favorite at FanDuel and PointsBet and an 18.0-point favorite at BetMGM and DraftKings. The spread-line action at all four sportsbooks has been one-sided for the Wildcats but the line has remained unmoved at most.

St. Peter’s is 0-3 all-time in the NCAA Tournament. In the field as the surprise Metro Atlantic Athletic Conference tournament winner, fun also is on the agenda for the Peacocks in Indiana.

But “fun” is no way to describe what’s in store for St. Peter’s big men tasked with wrestling with 6-foot-8, 275-pound Tshiebwe.

“My guys are not going to be intimidated. That’s not something that is instilled in this program,” said former Seton Hall guard Shaheen Holloway, head coach of the Peacocks.

KC Ndefo was MVP of the MAAC tournament and gets the primary assignment of containing Tshiebwe. Ndefo is a three-time defensive player of the year in the MAAC, but he gives up at least 75 pounds to Tshiebwe. He averaged 13.3 points and 3.1 blocks per game in the conference tournament.

“I don’t want to be one of those teams that just makes it,” Holloway said. “I want to try and make a run in it.”

Tshiebwe, also a finalist for the Naismith Men’s Defensive Player of the Year Award, averaged 8.5 points per game as a sophomore and transferred from West Virginia. Calipari said Tshiebwe led throughout the offseason with his attitude and work ethic to reap the rewards — and trophies — that come with it.

The SEC Player of the Year leads Kentucky with 17.0 points and 15.1 rebounds per game and enters the NCAA Tournament with 15 consecutive double-doubles. His 27 double-doubles this season broke the school record owned by Dan Issel (26, 1969-70).

“I just spend more time (getting) better at the things that I’m able to do, like rebounding and running the floor,” Tshiebwe said.

Calipari, 56-18 in NCAA Tournament games, has plenty in reserve if Tshiebwe runs into foul trouble or Ndefo takes the upper hand. Guards TyTy Washington (12.8 points per game) and Kellan Grady (11.5) are part of a scoring arsenal with five players averaging 10 points per game or better.

Kentucky is 10 years removed from its last national title, which came in 2012 in New Orleans, site of this year’s Final Four.