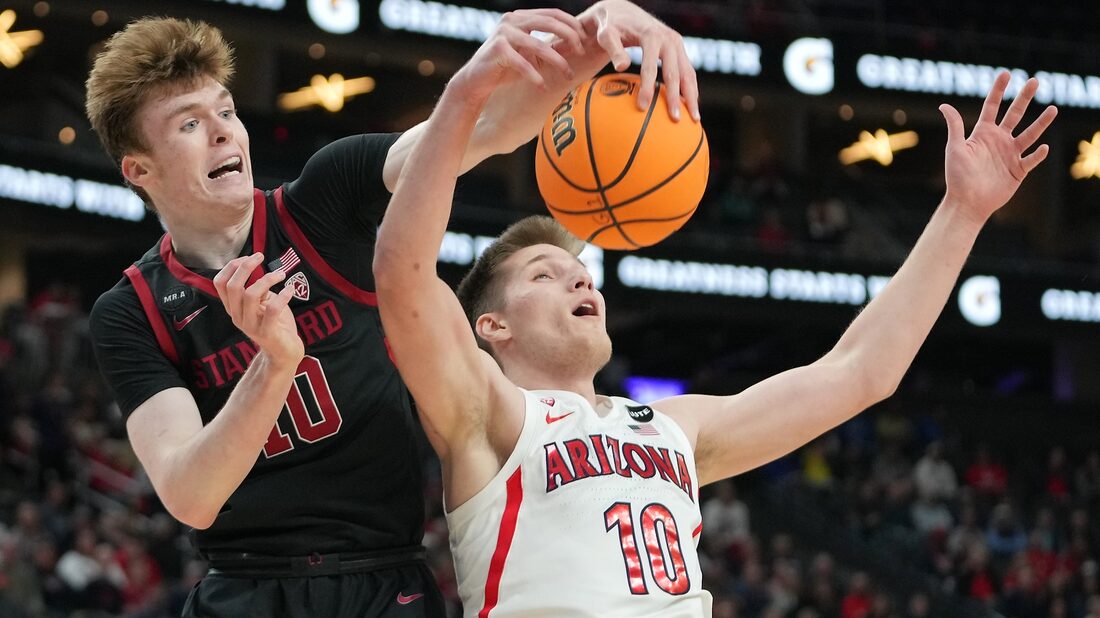 Christian Koloko recorded 24 points and nine rebounds to help #2 Arizona hold off Stanford 84-80 in the Pac-12 quarterfinals on Thursday afternoon at Las Vegas.

Spencer Jones scored a career-best 28 points and collected eight rebounds for ninth-seeded Stanford (16-16), which lost for the eighth time in its last 10 games.

Harrison Ingram added 16 points and Michael O’Connell scored 11 for the Cardinal, who put up a fight in a game featuring 22 lead changes.

The Cardinal connected on 54.2 percent of their shots and were 11 of 20 from behind the arc.

Ingram knocked down back-to-back jumpers to give Stanford a 73-72 lead with 4:28 left.

Mathurin’s dunk gave the Wildcats a 76-75 edge with 3:17 remaining and Koloko’s putback made it a three-point margin with 1:59 remaining.

Ingram hit another shot 21 seconds later to bring Stanford within 78-77. But Justin Kier hit a jumper and Koloko slammed home a dunk to make it a five-point game with 27 seconds left.

Ingram buried a trey to cut the Cardinal’s deficit to 82-80 with 13 seconds to play. Arizona’s Pelle Larsson made two free throws with 8.5 seconds left to seal it.

Azuolas Tubelis scored the first basket of the second half to give Arizona a 42-37 advantage before the Cardinal ripped off the next nine points. Jones hit two 3-pointers and O’Connell made a trey to give Stanford a four-point lead with 18:02 remaining.

The lead switched back and forth and the Cardinal kept the pressure on before the Wildcats created a little breathing room.

The Wildcats received a 3-pointer by Kriisa with 7:15 left and Koloko followed with two free throws 41 seconds later to hold a 70-65 lead.

Jones followed with a layup to surpass the 26 points he scored in Wednesday’s comeback victory over Arizona State. But Dalen Terry followed with a putback to give the Wildcats a 72-67 lead with 6:03 remaining.

Mathurin scored 14 points in the first half as Arizona led 40-37 at the break. Jones had 13 in the half for Stanford.