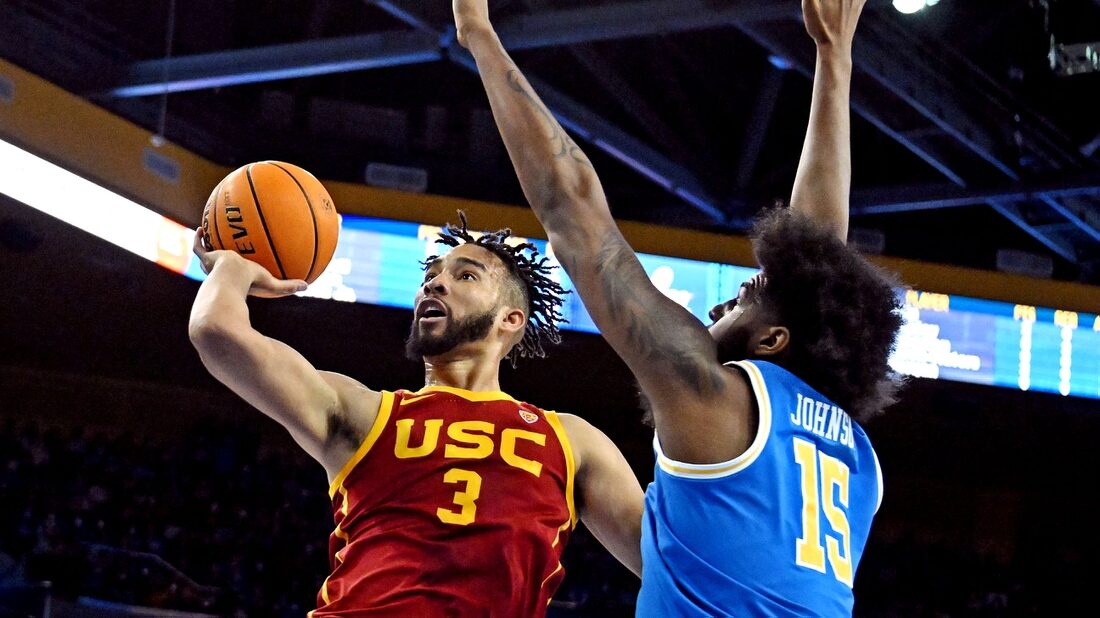 Jaime Jaquez Jr. scored 27 points and #17 UCLA converted 15 turnovers into 21 points as the Bruins scored their first win over rival and 16th-ranked Southern Cal since February 2019, 75-68, Saturday in Los Angeles.

The host Bruins came into Saturday’s matchup having lost each of its previous five matchups with the Trojans since Mick Cronin became the head coach in the 2019-20 campaign, including on buzzer-beaters in the last two regular-season finales.

After USC (25-6, 14-6) cut the deficit to two, Cody Riley helped ensure this regular-season finale would not come down to another last-second shot. His turnaround jump shot in the lane with less than a minute left extended UCLA’s lead to four points.

On the ensuing possession, Drew Peterson drew a defender away to free up Max Agbonkpolo for a 3-point look in the corner, but Agbonkpolo stepped out of bounds. It was the last of USC’s 15 turnovers.

USC had one last possession to cut into the gap after Johnny Juzang — making his return from a two-game absence due to an ankle injury — missed a pair of free throws. Reese Dixon-Waters 3-point attempt on the other end was no good, and Jules Bernard iced the win with three free throws down the stretch.

Bernard finished with 19 points, Juzang scored eight on 4-of-13 shooting from the floor, and Tyger Campbell scored nine points.

UCLA heads into next week’s Pac-12 tournament in Las Vegas as the #2 seed. USC is the #3 seed.