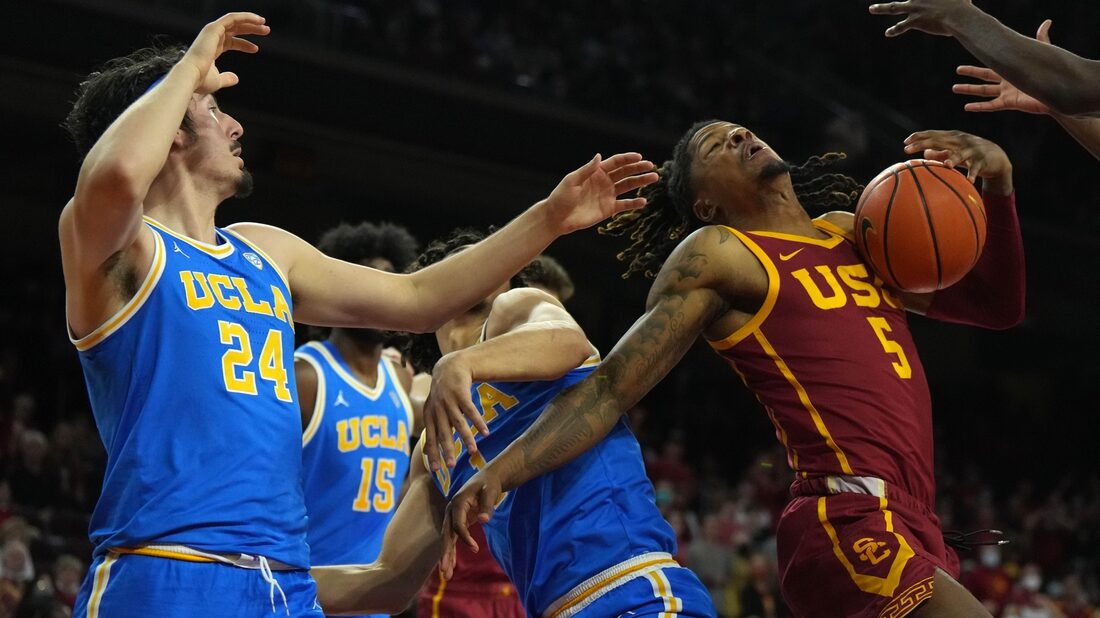 #17 UCLA will be playing for its first win over crosstown rival #16 Southern California since February 2019 on Saturday when the Bruins host the Trojans in Los Angeles.

Last month&rsquor;s victory was the third in the past four meetings between the two decided by a single possession. USC won on buzzer-beaters to end both the 2019-20 and 2020-21 regular seasons against UCLA.

“We have a lot of guys in the locker room that haven&rsquor;t beaten them,” Jaime Jaquez told the Los Angeles Times following the Bruins&rsquor; 77-66 win at Washington on Monday. “It&rsquor;s something that we need to do. It&rsquor;s really do or die for us … and we&rsquor;re going to give it everything we&rsquor;ve got to try to get that win.”

Jaquez shot just 2 of 11 from the floor and finished with five points — almost eight below his season average — in the previous meeting.

He scored 17 and a career-high 30 points in UCLA&rsquor;s last two outings, however, picking up the slack for season-long scoring leader Johnny Juzang. Juzang sustained an ankle injury in the Bruins&rsquor; Feb. 24 loss at Oregon.

USC&rsquor;s scoring distribution has been similar, with Isaiah Mobley pacing four Trojans in double figures per game at 14.4. Peterson is averaging 12.4, Boogie Ellis is adding 12.2 and Chevez Goodwin is posting 11.5 points an outing.

The Trojans struggled mightily to find their scoring touch their last time out, however, in a 91-71 loss to #2 Arizona on Tuesday. The defeat knocked USC out of the running for a Pac-12 regular-season championship, and the trio of Mobley, Ellis and Peterson shot a combined 8 of 34 from the floor for 28 total points.

“To beat a team like Arizona, you have to play better offensively,” USC coach Andy Enfield said in his postgame press conference. “We turned down shots in the first half. We didn&rsquor;t play with pace in the first half and had turnovers. We need to bounce back and play with more togetherness and efficiency.”

USC turned the ball over 12 times against the Wildcats and shot 39.7 percent from the floor — including 22.2 percent from 3-point range — on the night.

UCLA (22-6, 14-5) endured a rocky start Monday at Washington, hitting just 10 of 29 shots in the first half. But Jaquez led a second-half romp, shooting 6 of 11 from the floor after intermission and recording 17 of his 30 points.

Bernard also came alive in the second half with nine points.

“Sometimes, the ball just doesn&rsquor;t go in,” Cronin said of the sluggish offensive start. “You don&rsquor;t want that to happen, but with the tournament coming, it&rsquor;s great to coach — to try to practice coaching them through it. We need to just worry about what we can control. That&rsquor;s just keep getting good shots, keep defending, rebounding.”