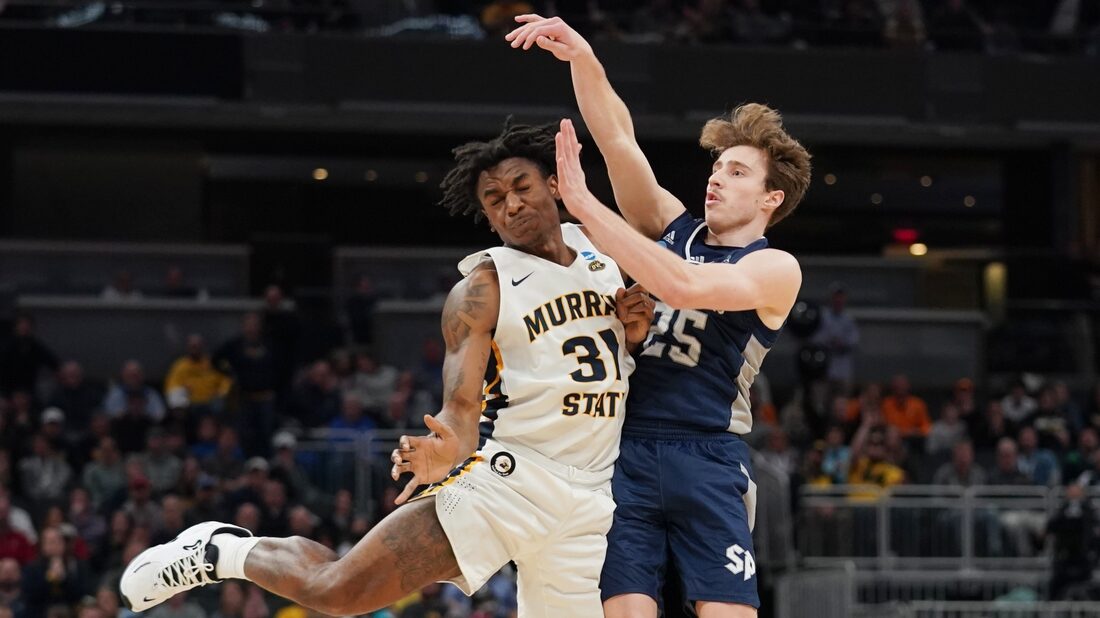 INDIANAPOLIS — Saint Peter’s is the patron saint of upsets in the 2022 NCAA Tournament.

The 15th-seeded Peacocks knocked off #7 Murray State, 70-60, on Saturday night to move from the East Region in Indianapolis to the Sweet 16 two days after winning the program’s first NCAA Tournament game.

Philadelphia is the next stop for the Peacocks and a Friday night date with the winner of Sunday’s second-round game between #6 seed Texas (21-11) and third-seeded Purdue (28-6).

Saint Peter’s (21-11) never trailed in the second half, led by KC Ndefo with 17 points and 10 rebounds, and another clutch late-game effort from reserve guard Doug Edert. Edert had 13 points, including 10 in the final six minutes to lift the Peacocks, who survived an off night from Daryl Banks III.

“This is what we do the whole year,” Saint Peter’s head coach Shaheen Holloway said. “This is who this team is. Offense sells tickets and it’s cool. Defense wins championships. The rest is history.”

The Racers were 18 of 52 from the field. Murray State got 19 points from Justice Hill and 14 from Tevin Brown.

Murray State got the ball back with 1:38 to go, trailing 64-58 but Hill fired a pass out of bounds. A defensive stop followed by Brown’s uncontested bucket reset the game with 1 minute left and the Peacocks up four and with possession.

Banks was fouled, made both ends of a 1-and-1, and the Peacocks again led by six.

Hill sank a 3 in front of the Murray State bench before Edert made it a five-point game, 62-57, with a trey of his own from the right wing. The Peacocks got the ball right back on an unforced turnover. Edert’s layup on a backdoor cut put the Racers in a 54-47 hole with the clock showing 2:59.

Edert made three free throws with 5:48 left to stretch the Peacocks’ edge to 57-50. Murray State cut into the lead when a block of Matthew Lee’s runner led to a fastbreak basket for Trae Hannibal, who made the free throw after being fouled.

Edert rolled in an twisting runner from the right side of the lane the next trip to get Saint Peter’s more comfortable. He said he and his teammates were taking nothing for granted as they move toward the second week of play.

“We’re not going to get too high,” Edert said. “It’s a quick turnaround. We will be ready for the next one.”

Saint Peter’s built a lead as big as 13 in the first four minutes of the second half, 40-27. But with Brown sitting with three fouls, Hill gave Murray State a desperately needed transition 3 from the corner, and Tevin Brown followed with a longball from the left wing on the Racers’ next possession, trimming Saint Peter’s lead to 50-47 with 8:26 left.

Ndefo had 11 points in the first half while Banks was held in check with three. He had a game-high 27 in the opening round Thursday.

Saint Peter’s led 32-27 at the half when the teams combined to go 5 of 17 from the 3-point line. The Peacocks spent the final 8:25 in the bonus. Murray State was whistled for 12 fouls in the first 20 minutes.

Lee said the Peacocks’ expectations for themselves started with their head coach, Holloway.

“He expects a lot out of us,” Lee said. “We’ve got a lot of scrappy players. A lot of underrated players.”

The Peacocks became the 10th #15 seed to reach the second round of the NCAA Tournament with Thursday’s overtime shocker against #2 Kentucky.